I made over 100 databases during my life and posted them on my website for everyone, from students practicing data analysis, to multi-national companies in real estate and automobile industry.

Most projects I made from personal interest to distribute freely or sell for professional use. Some projects I made at request for a specific customer and published on website to allow other customers to purchase if interested. I offer web scraping services, making custom databases according your requirements.

Not included in below list are the databases made as one-time project for single customers outside of my fields of interest, few being under non-disclosure agreement.

These databases are targeting commercial use, each year few hundreds companies, programmers and web developers, are paying me BIG $$ to ensure getting a complete vehicle database, frequently updated and with accurate technical specs, several customers offered me $1000+ to make a customized vehicle list. Hope you can do the same.

If you are a company, stay away from websites offering FREE databases, they are most likely stolen and posted online by other people than original author, or made by careless students who needed only a bunch of data for their studies, such databases does not cover all cars, have many errors, are outdated, no support or updates are provided. Using databases downloaded freely may destroy your company reputation.

Some databases I posted for free download (example: List of Singapore MRT and LRT stations) because data is simply copy-pasted from Wikipedia or other websites, anyone can do the same in few minutes, thus I do not think that anyone will pay me. After copy-pasting data, what I did was to add visual borders and colors.

Most gaming-related databases are free because they have NO USE for professionals, the only people who may find them useful are gamers who are unlikely to pay money.

How I came in data providing industry

I am born in a family of engineers (read more on About me), I use AutoCAD since 1998 and in 2008 I started designing buildings, many people encouraged me to pursue a career in architecture, but this turned to be a bad experience due to difficulties in convincing people to pay my services, many idiots who want house plans for free, and in the rare cases when I was paid, it was one-time payment per project. I had little contact with people in IT and nobody ever told me that these databases can be a gold mine.

Since childhood I love writing books, doing research, making databases and statistics. I started using computers in 1997, my dad taught me to use Word, but around 2003 I started using Excel more than Word. Analyzing data, making tables and charts about everything encountered in my life! For example, in racing games I measure the speed of each car and write the numbers in an Excel spreadsheet then make a chart.

The hobby for cars started in 1999, since 2003 I use Excel to create an all-cars database, independently from the internet world (I connected to internet in 2005), manually entering data from the very reliable AutoKatalog car magazines from Germany (as seen in above video), making an original compilation that you cannot find anywhere else online (except on websites that purchased from me).

In 2011 I published car database works for first time on my website, intending to share with other car hobbyists, but had the surprise to be visited by programmers, web designers and mobile app developers, working for various companies (car insurance, car parts shops, car shipping services, etc), realizing that I can make a business from this!

Had to do extensive transformation to make my hobby-made databases suitable for professional use. For example: some cells were merged horizontally and vertically, and Make | Model was originally on a single column, which pose no problem in reading with human eyes, but a computer program cannot read it correctly. As soon 1 customer bring this in attention, I eliminated merged cells and separated Make | Model to 2 columns.

Hong Kong Housing Database was also made in early 2011 from personal interest of analyzing public housing estates, few months later, an insurance company asked me if I can expand it to private housing estates. It became my FIRST large project made for a customer.

Seeing the success with car database, I decided to transform other hobby databases, such as HDB Database and World Cities Database, in a format suitable for machines, and publish on my website for sale to professionals.

A new era started in 2015: web scraping. “Scraping” usually means coding a bot that visit a list of given pages, copy specific data from each page and put it in an Excel / CSV file automatically, at rate of few pages per second. This allow me to create much larger databases with little effort, writing scraping code takes 10 min – 1 hour, and running it in background takes few hours or days to generate CSV with 1,000-100,000+ rows.

Previously I avoided to copy data from other websites, thinking that it means cheating, copyright issue, illegal way to collect data and creating non-original content, but most people have no issue with this, they do not care about buying someone’s original compilation and ask me specifically to create scripts that extract data from various websites and sell them CSV. Now I want to apologize to all owners of websites I scraped data from, but if I was rejecting these customers motivating that scraping is illegal, customers would go to other data mining companies or freelancers and obtained same data anyway.

Keeping all databases regularly updated takes is a huge workload. Scraping more websites, if they take too much time, will create additional workload and will delay everyone’s updates. As 2018 I decided to STOP updating databases having less than 5 sales per year so I can focus on the ~20 best-selling databases that produce 80% of my income.

So… unless you come with a GREAT IDEA of database that can be sold to multiple customers, I have the right to NOT do your web scraping project if it takes more than ~2 hours of manual work and more than ~50 hours of running scraper in background.

My hobby for writing started before having a computer, I was writing with pencil on notebooks.

We had a computer since 1995, and in late 1996 my dad taught me to use Microsoft Word, he even set me rules how to write a nice Word document: Arial font, body text with 12-14pt and justified, titles 16-20pt centered, bold and underlined. However, since my writings were not really a book, but a list of… something, following my dad rules created excessive bold and centered text. I personally added a system of numbering chapters, and since some of my works (example: list of rivers) had 5-level hierarchy, titles contained 1.2.3.4.5. title name, making document unaesthetic.

My dad told me to finish and print the work because “what is not finished have ZERO value“. I never understand why he wanted to print. Some projects like Car Database should NOT be printed, it cannot be “finished” because need constant updates with new launched cars. My parents promised me that will help me publishing a book, that turned sarcasm. They were against becoming a public figure (note: they may have wanted just to give me a solitary occupation to stop me disturbing them, instead of letting me to have a social life).

Exploring my computer, especially Readme.txt from various software and DOS games, made me fascinated in 1998 to use Notepad because of Fixedsys font, I made some writing where titles were enhanced with lines of —- or ==== of full width of screen. For a period in 2001-2004 I even wanted to impose monospace fonts for all my works.

Since 2003 I broke away from dad rules and started using Excel more than Word. New works in Word were optimized for on-screen display instead of printing, often using non-standard page sizes, to make exactly 1 page for each subject. I made body text with 10pt, titles 20pt and 15pt with full-width colored background, usually red and blue. New works in Excel had column headers with blue background and white text, but I gradually changed to coloring background of each group of columns in rainbow colors.

I created my first website in 2009, designing it similar with my Word documents: body text justified and titles centered with different background color. Some people criticized my website, saying that is looks being made by an expert in typography rather than by a web designer.

In 2015 I changed my Word files, removing full-width colored backgrounds of titles, putting instead full-width horizontal lines (somewhat similar with TXT files from MS-DOS era). This will be better for printing (even if I assume that nobody will print my works). 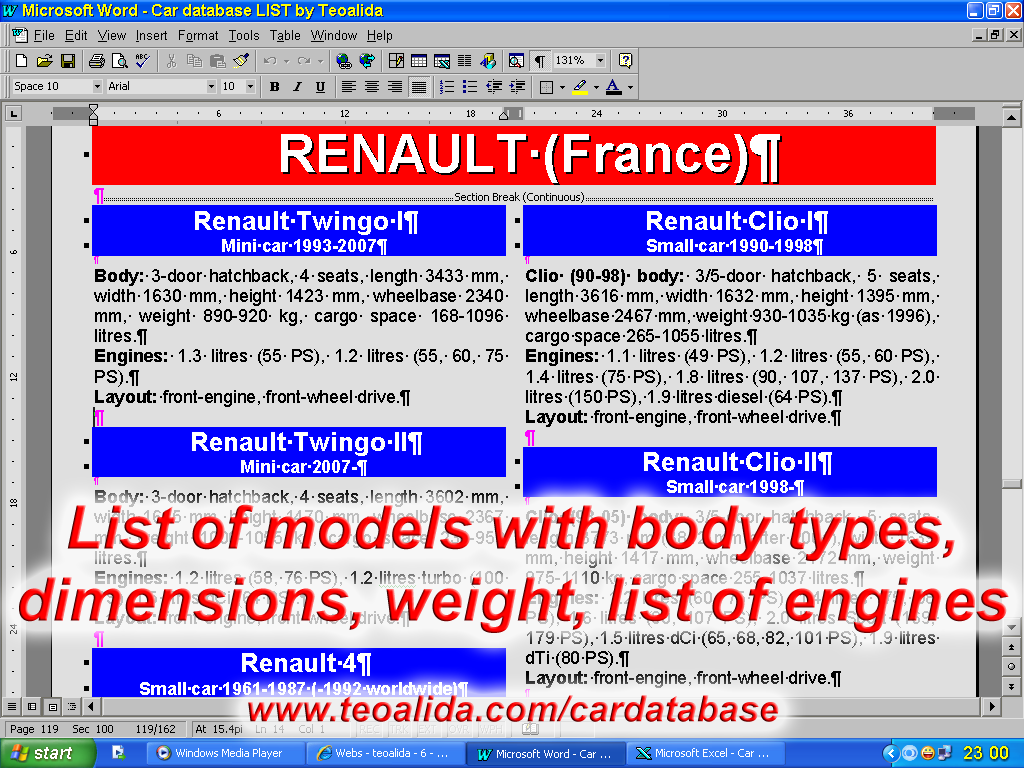 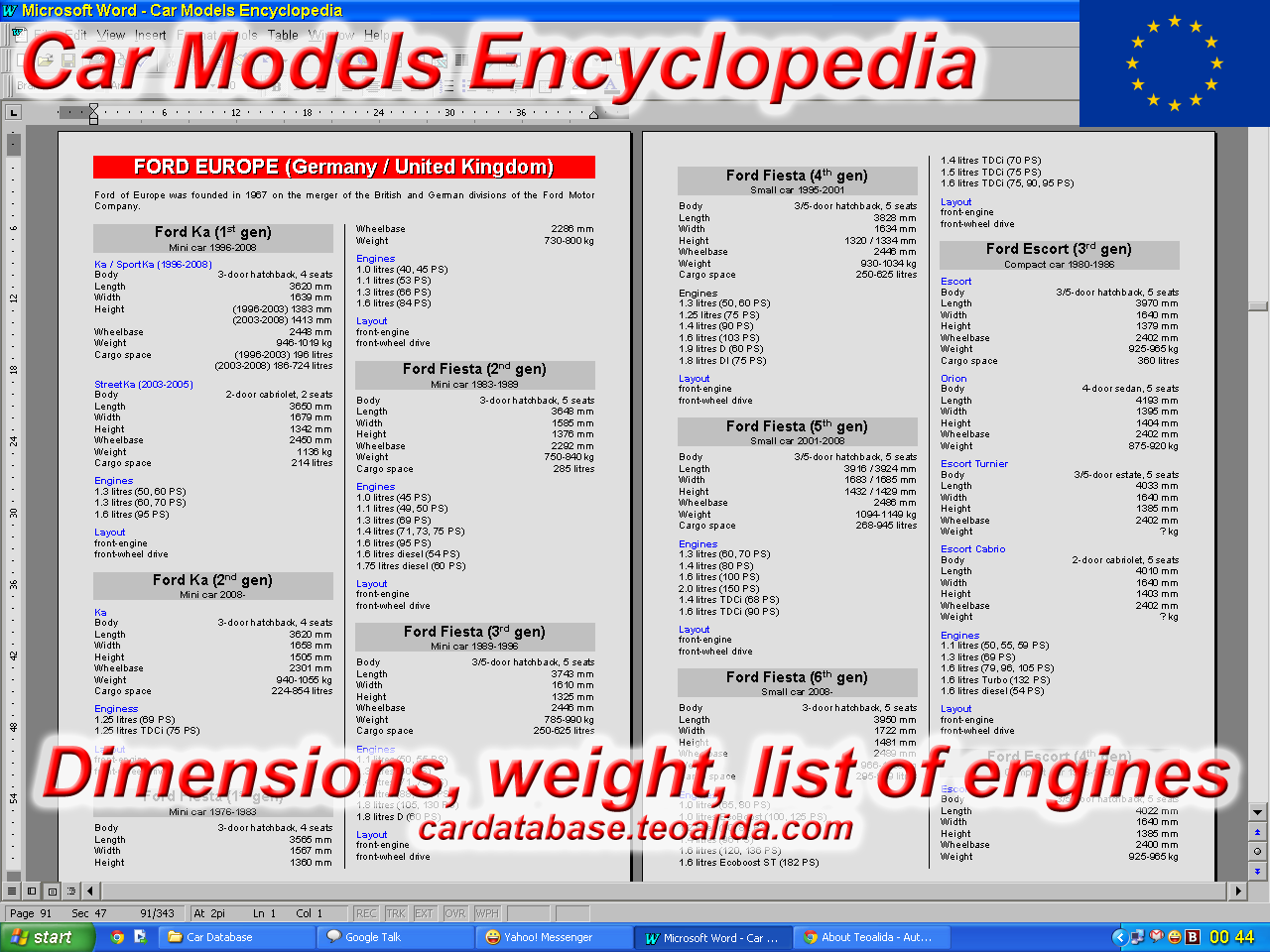 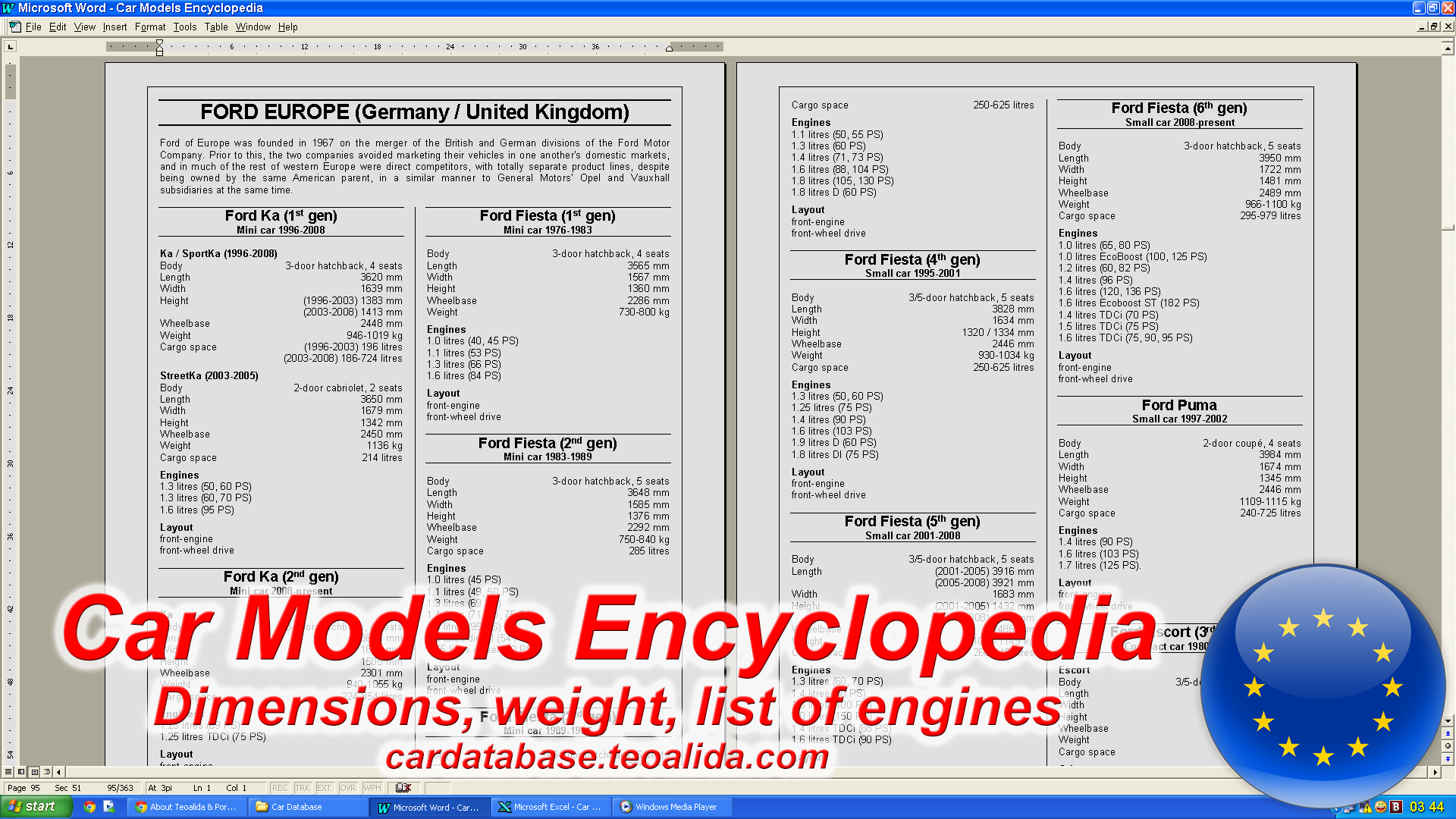 I also done some kind of competition between my projects, using an Excel size to keep track of file size, number of pages, rows and columns of each project. A race to create biggest Excel spreadsheet or biggest Word document, in terms of pages and file size, under certain standards (body text 10pt font, no duplicate stuff, no large open spaces, NO bullshit but useful content, etc).

Today, sales of Excel databases is my primary source of income. Word documents and books turned hard to sell, but I continue to write, just that I write blog articles instead of Word documents.

All databases made by me wear a signature: the very colorful Excel spreadsheets with borders in correct place (since 2013 I realized that majority of customers import data into MySQL instead of visualization in Excel, so the visual enhancements are useless), but they prove how much CARE I spend developing databases. 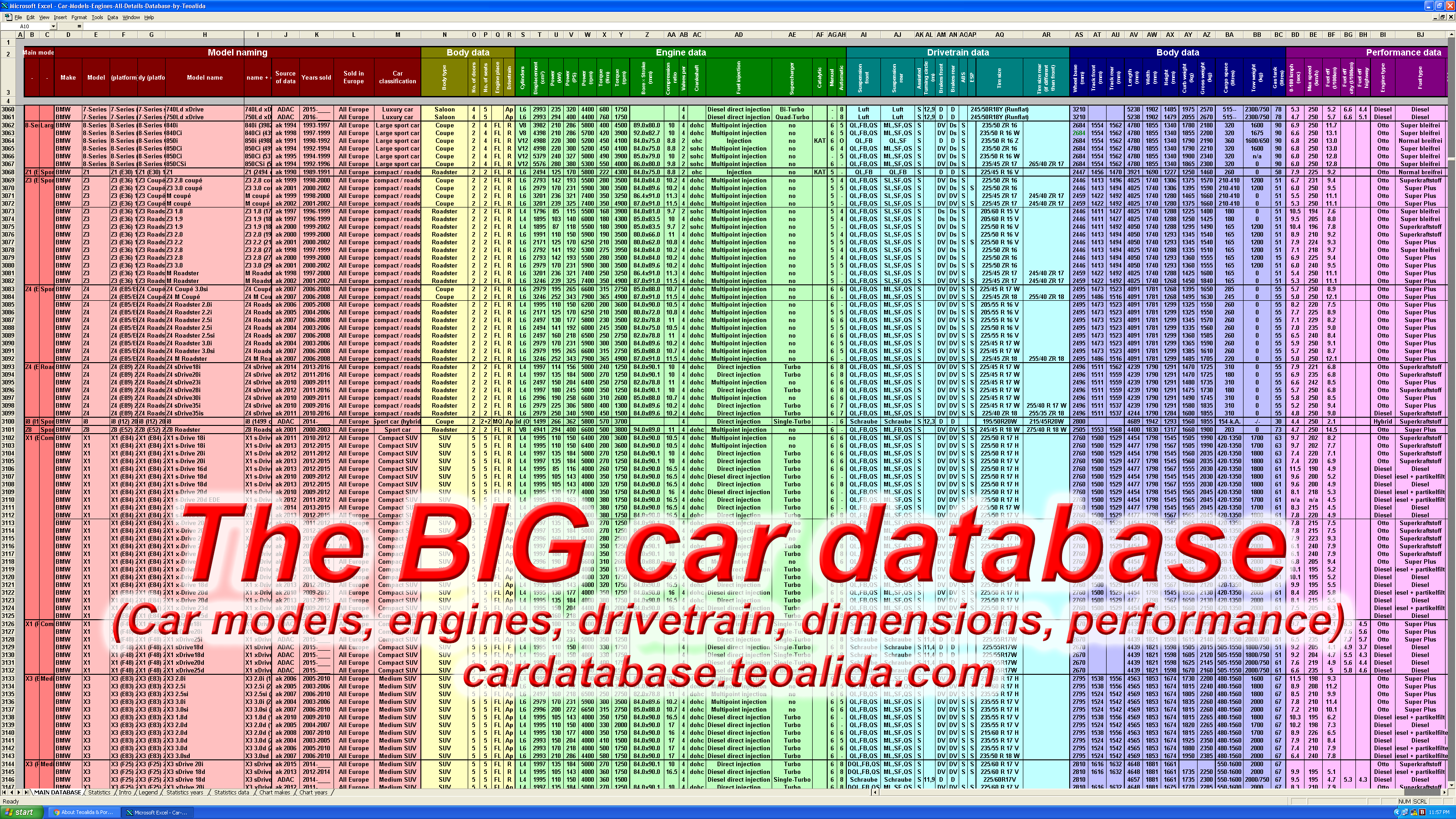 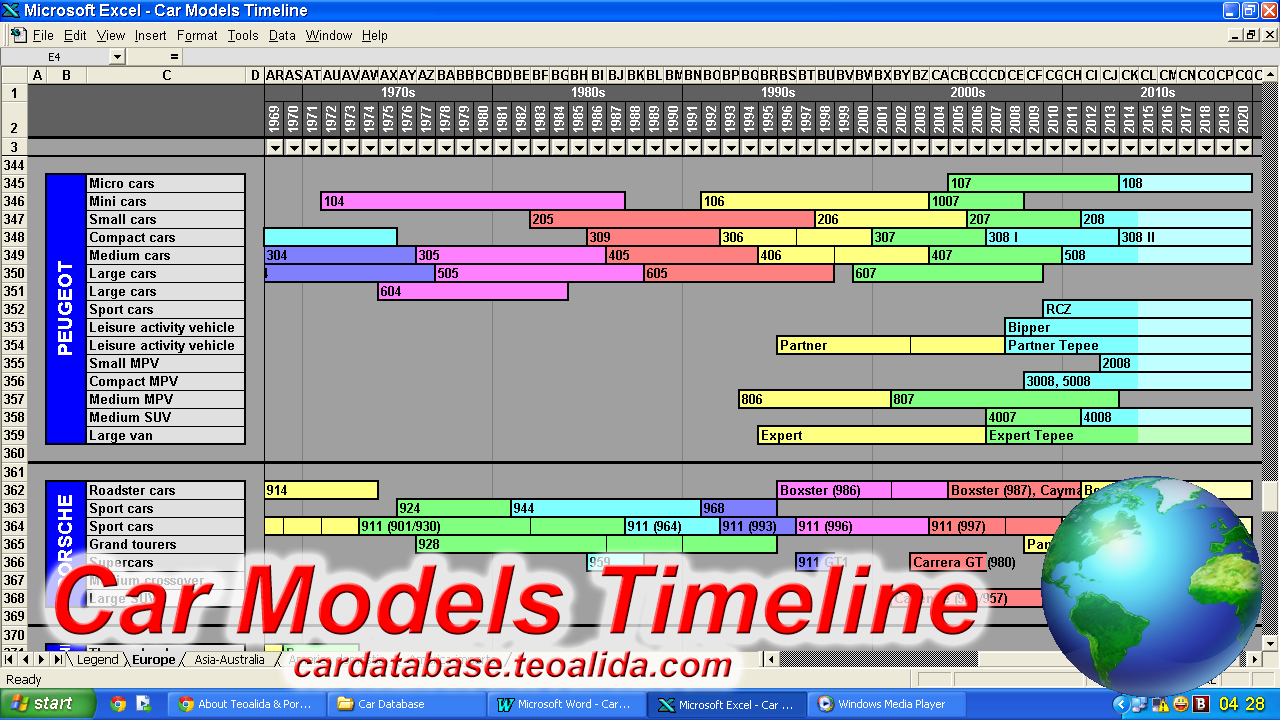 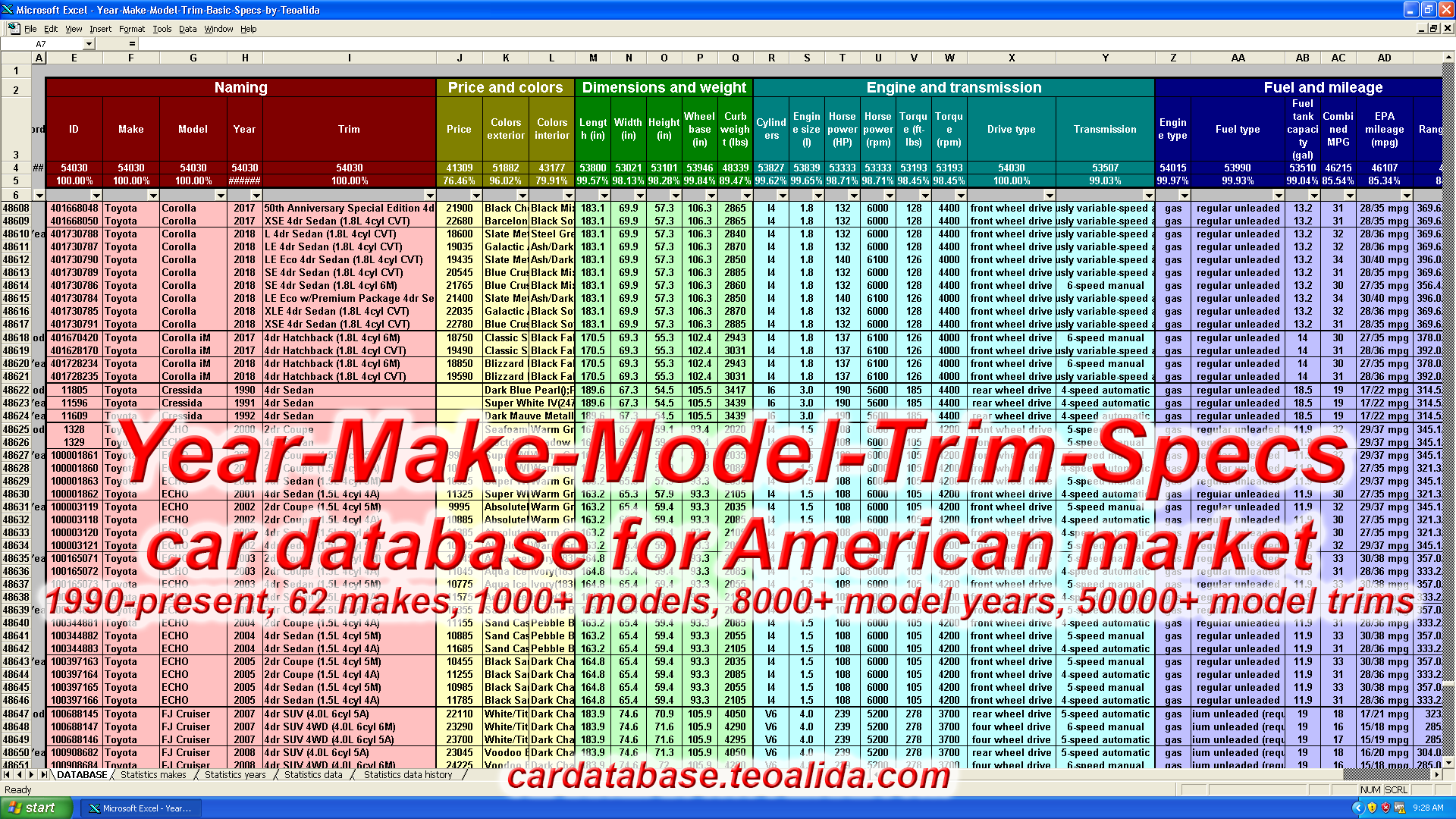 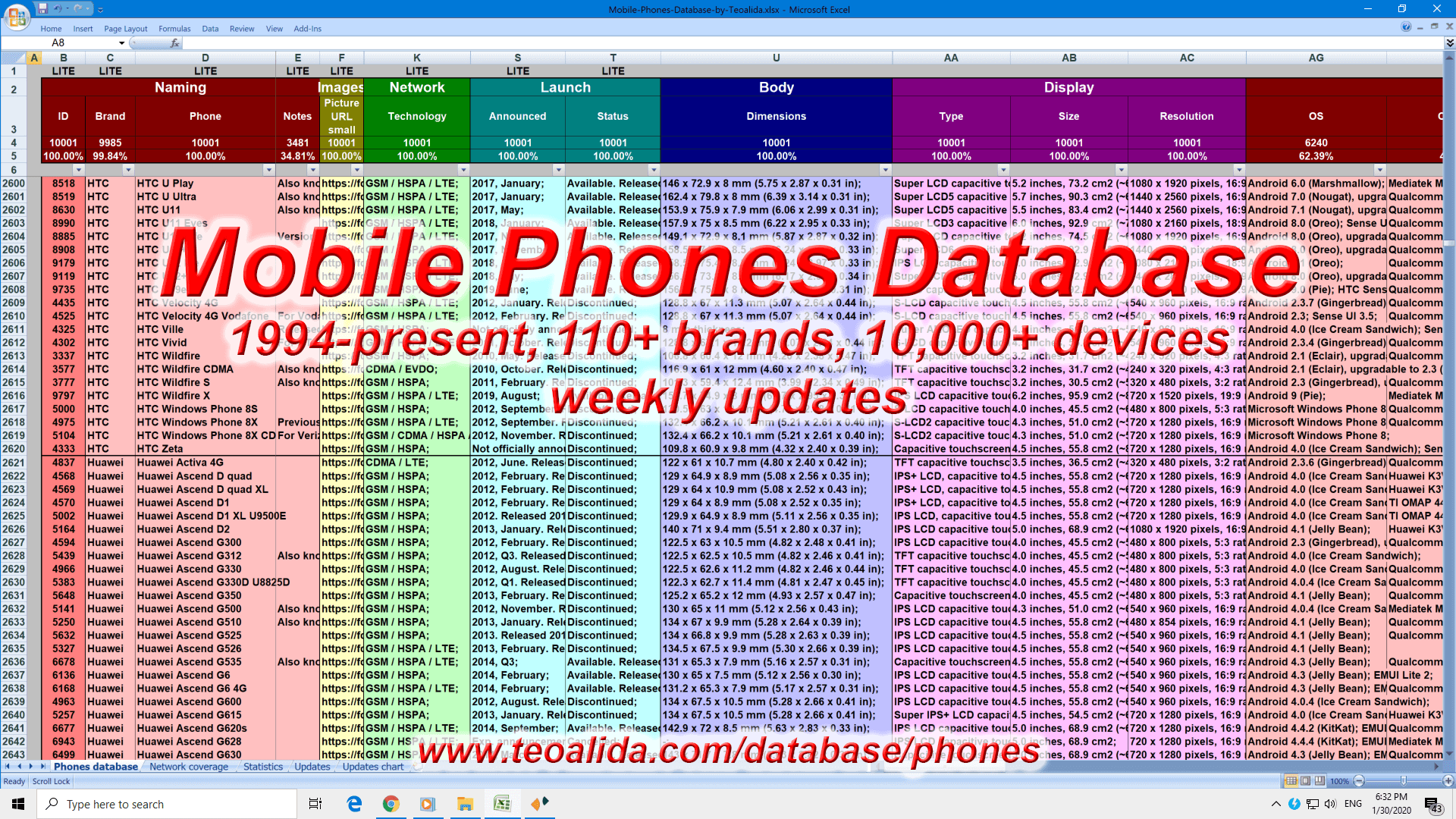 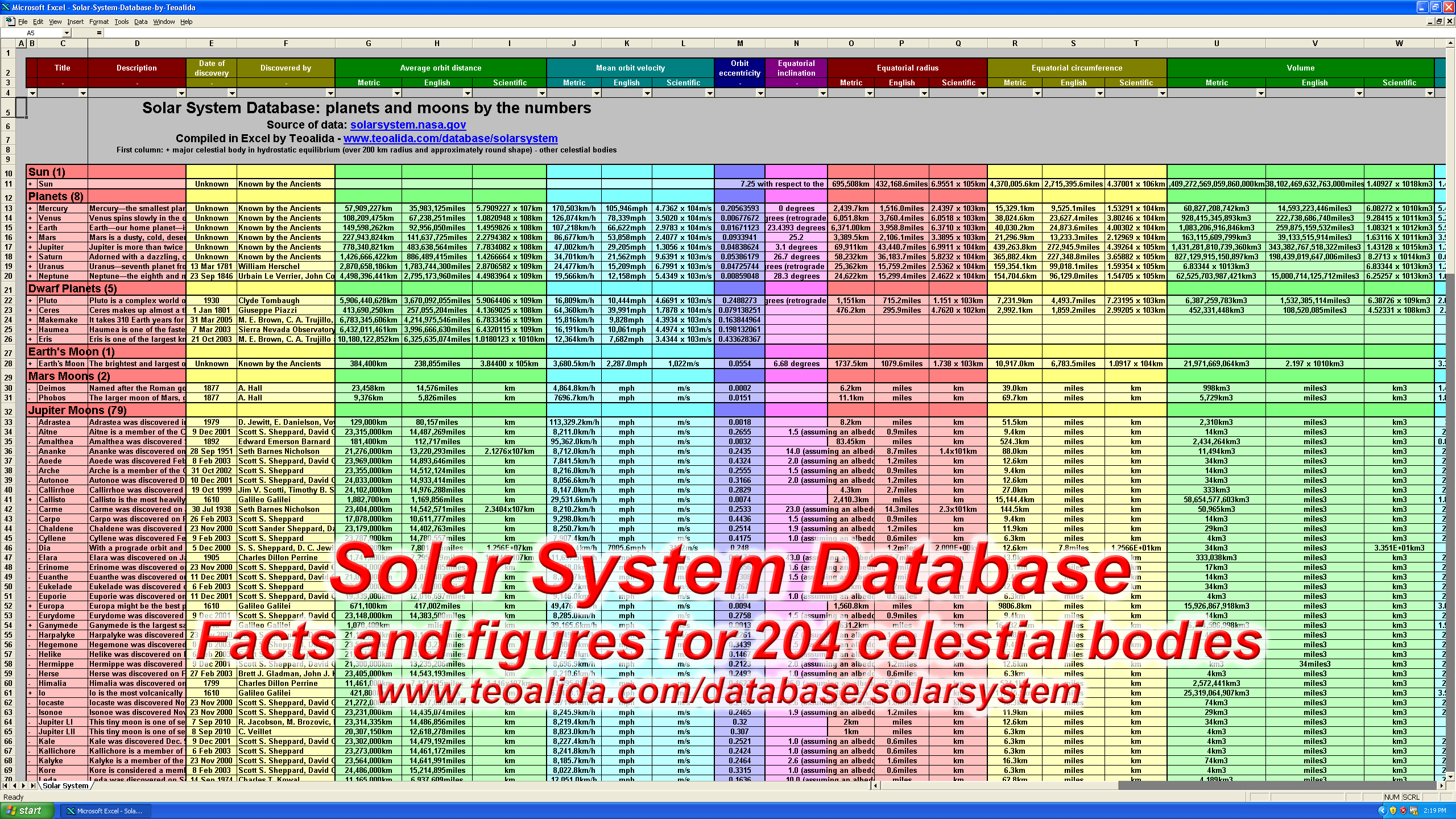 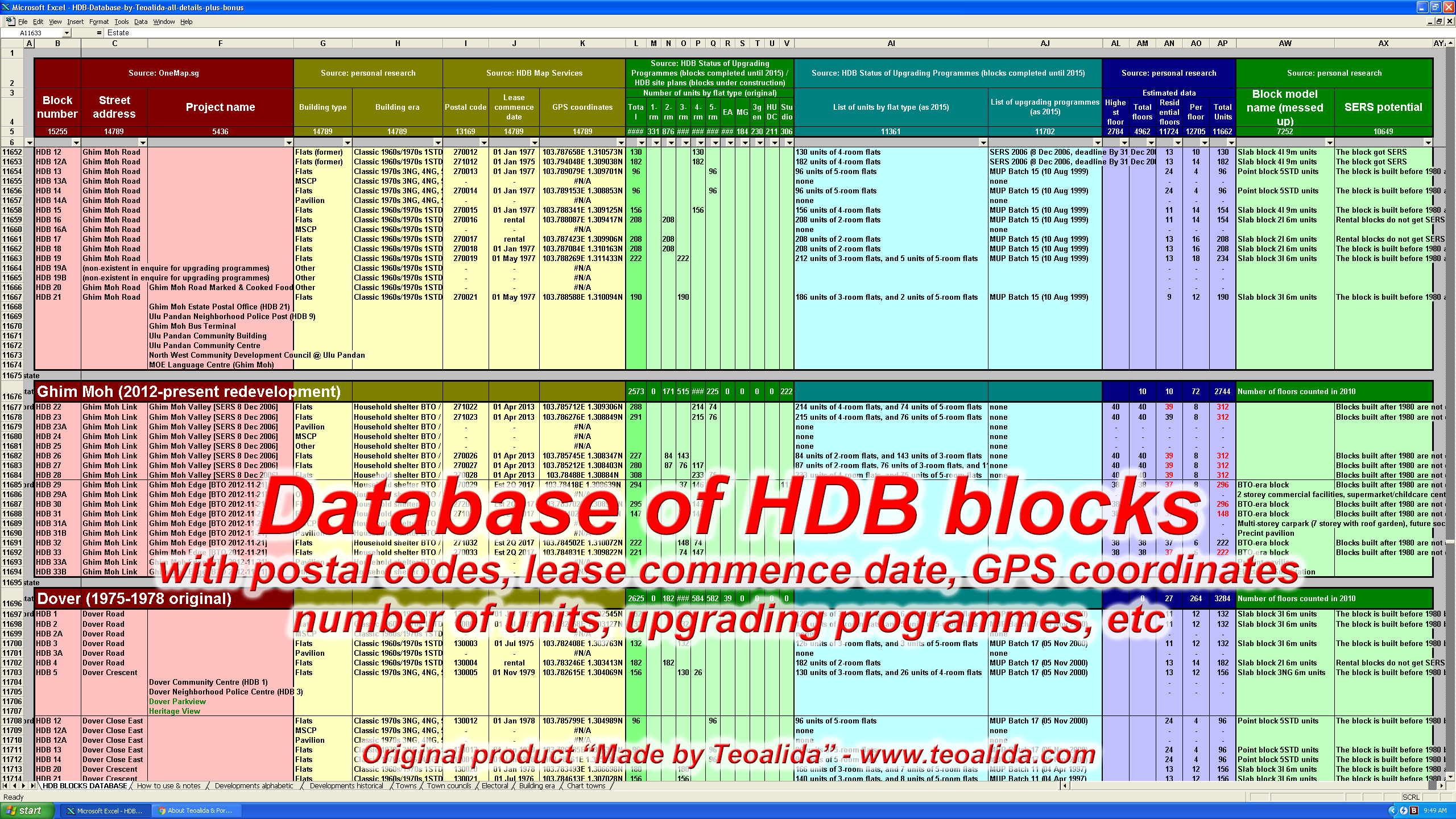 4 thoughts on “Index of databases made by me”