What other type of info would you like to see in this page? Leave comments!

After 1990, when the communist governments in Europe felt down and the countries entered in economic decline, China entered in an economic boom, becoming one of the fastest growing economies, overtaking Japan in 2011 as GDP and is likely to overtake USA too during 2020s. Shanghai Metro was opened just in 1995 and after only 15 years, it reached over 400 km of lines in 2011 and overtook the 137-years old London Underground. Is planned to have over 800 km of lines by 2020. Will be the longest in the world, depending how much Beijing Metro will grow too.

Beware that internet censorship in China is high, although not like North Korea where internet connection is available only for government officials. Numerous popular websites such as Youtube and Blogger are considered to have offensive content so are blocked by government. On my Blogspot websites I never had a single visitor from China, but I had from all surrounding countries, but at least… Webs.com is not blocked so I get chinese visitors on my website (this website was running on free hosting Webs.com until 2012).

I gained just little knowledge about China housing, although I spent much time studying China in Google Earth, without english websites I cannot do proper research, also I see China a bit uninteresting compared with other countries I studied. I do not know when public housing began, but satellite photos shows that early public housing is already being demolished during 2000s.

Nowadays most of housing in China is privately built. Chinese cities are monotonous (like South Korea cities), having rows of linear buildings with identical apartments all over the city. From satellite photos I can see that most common block type is segmented block with 2 apartments per floor, with main rooms facing south, typical size 16 m long and 12 m wide, no significant increase over last 10-20 years. Most blocks are 6 floors, probably maximum height allowed without lifts. Most blocks are placed at 15 meters apart, probably minimum by law (quite dense compared with other countries).

Since 2000s number of high-rise buildings increased rapidly, residential towers with more complex shapes, but the construction of traditional low-rise linear blocks continue. Most apartments have 2-3 bedrooms, some 4 bedrooms, and include a balcony for living room, after 2000s bay windows became common, there are 60-cm wide opening panels on each side and a fixed panel in the middle, exactly like in Hong Kong (I know that in Hong Kong a law from 1980s introduced plot ratios and exempted bay windows from gross floor area, but in China does anyone know what happened?).

According some sources, including statista.com, the housing reached a ratio 35 sqm per person in 2012, but this looks like a propaganda lie, this high ratio of sqm per capita is impossible since average apartment size is somewhere in 60-80 sqm, bedrooms small as 3×3 / 3×4 meters and multi-generation families are quite common in China, or maybe the statistics are made to include wall thickness, a sharepart of staircase and common areas, etc.

According shrinkthatfootprint.com average apartment size in China is 60 sqm but is not clear if is newly-built apartments or all apartments, probably all, because new apartments are bigger. It also shows 76 sqm in United Kingdom which accounts new houses only. According scmp.com is 646 sq ft.

There are plenty of floor plans, but websites are not in english, you should search in chinese 户型 or 公寓平面图 (Gōngyù píngmiàntú). Best if you can understand chinese (unlike me!) 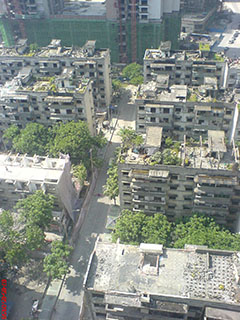 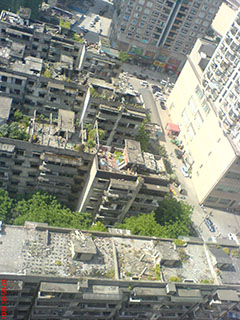 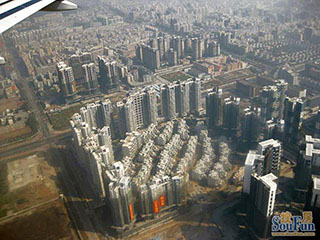 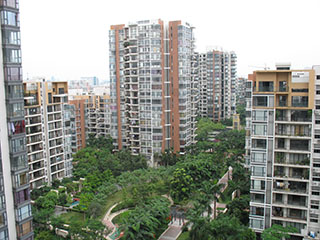 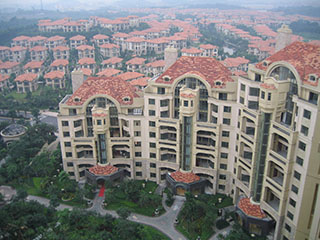 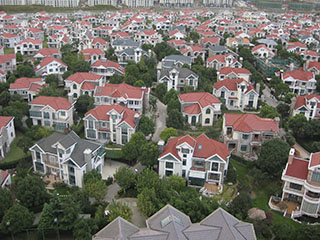 Made in China quality

I do not know if there is any country in this world who have not been flooded by cheap Made in China products. Everywhere in the world China sell low quality products that break often and do not last long.

This is valid for housing, a couple of apartment buildings and bridges collapsed in China, some while still under construction, example in the below photo (source). Is hard to say how many buildings are good and how many bad quality. 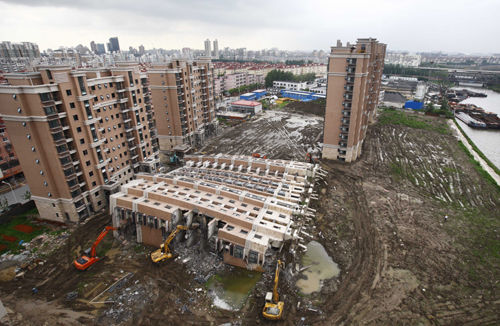 Like other communist countries (or even worse than others), private car ownership in China was limited until 1980s and for most families bicycles were the only vehicle owned. Mass car production stated in 1990s, exports started in 2000s with little success, due to the “brilliant” quality of chinese products!

Despite of low sales in foreign markets, the increasing local demand for cars China to be the new world leader in automobile production in 2009, overtaking Japan and United States (source: Wikipedia), producing 13 million cars (compared with 2 million cars in 2000), then 18 million in 2010 and 2011. See more in Automobile Production .XLS.

A lot of impressive highway interchanges were built in recent years, but… do they have enough parking spaces in apartment complexes? China is also the world leader in high speed railways.

Guangzhou-Shenzhen Railway became in December 1994 the first line in China to offer sub-high-speed service of 160 km/h. The line was electrified in 1998 and increased service speed to 200 km/h.

In 2004, the Shanghai Maglev Train, linking Shanghai Pudong International Airport with the city, became the world’s first commercially operated high-speed maglev train. It remains the fastest commercial train in the world with peak speeds of 431 km/h and makes the 30.5 km trip in less than 7.5 minutes.

By the end of 2018, high-speed rail extended to 30 of the country’s 33 provincial-level administrative divisions, the exceptions being Macau, Ningxia, and Tibet, and reached 29,000 km in total length, accounting for about two-thirds of the world’s high-speed rail tracks in commercial service. The HSR building boom continues with the HSR network set to reach 38,000 km in 2025.

Worldwide cities database organized by country, state and province, with city population indicated. An original product “Made by Teoalida” that you will NOT find elsewhere on internet, compiled by me since 2003 and gradually expanded over years, based on Microsoft Encarta Encyclopedia. Currently it include over 16000 cities, more exactly ALL cities in the world with population over 20,000 people.

Rules:
– ONE city per country, is not mandatory to be the capital or the largest city.
– City should have at least 1 million people, never mind of Venice.
– Should be taken in consideration as many points is possible, but biggest point is for the living conditions. This ranking is like “Best cities to LIVE” not “Best cities to VISIT (as tourist)”.
– The ranking is not related with the photos. I just added one random landmark photo for each city.

United States is a country of contrasts. Skyscrapers in downtown and low-density landed houses in suburbs. Despite of being one of the wealthiest countries of the world and having one of the highest costs of living in the world, American face income inequality and many living under poverty line. This article is valid at some extent for Canada, Australia and New Zeeland too.

North Korea is an interesting country for being full of mysteries. It is the most isolated country in the world and most of information comes from government media, tourists and defectors, which contradicts each other. All articles about North Korea found on internet have less or more degree of inaccuracy, including my own article.

North Korea is widely considered as the worst place to live. In reality, it is not that worse, living there is just… different than the rest of world. North Koreans have no contact with outer world and live happily as long they do what the Supreme Leader wants and obey stupid laws, brainwashed by government that their country is the best on earth. While the industry is lagging several decades behind rest of world, the population is one of the most educated in the world, reaching a level of order and discipline that should be example for any citizen in the outer world.

At first impression, North Korea looks a developed country, with high literacy rate, beautiful architecture and well-planned cities, but actually it is one of the poorest countries in the world, and the single highly educated country suffering by famine. The economy started rising again in 2000s, but most of money goes to political elite and their nuclear program, while population suffer from malnutrition.

More than half of South Koreans live in massive of apartment blocks, private developers built distinct complexes but with identical buildings arranged in grid all around the city. South Korean society emphasizes the family, not the community, and the apartment design reflect that. Korean developers pay attention to offering best living conditions instead of maximizing their own profits. Apartment blocks are usually 15 to 30 floors and large open spaces between them, not crowded by developers hungry for profit like in other countries. All units come with floor heating and high-tech fittings (details below). People hate the appearance of the apartment complex, but love to live in an apartment unit in that complex.

4 thoughts on “Housing in China”