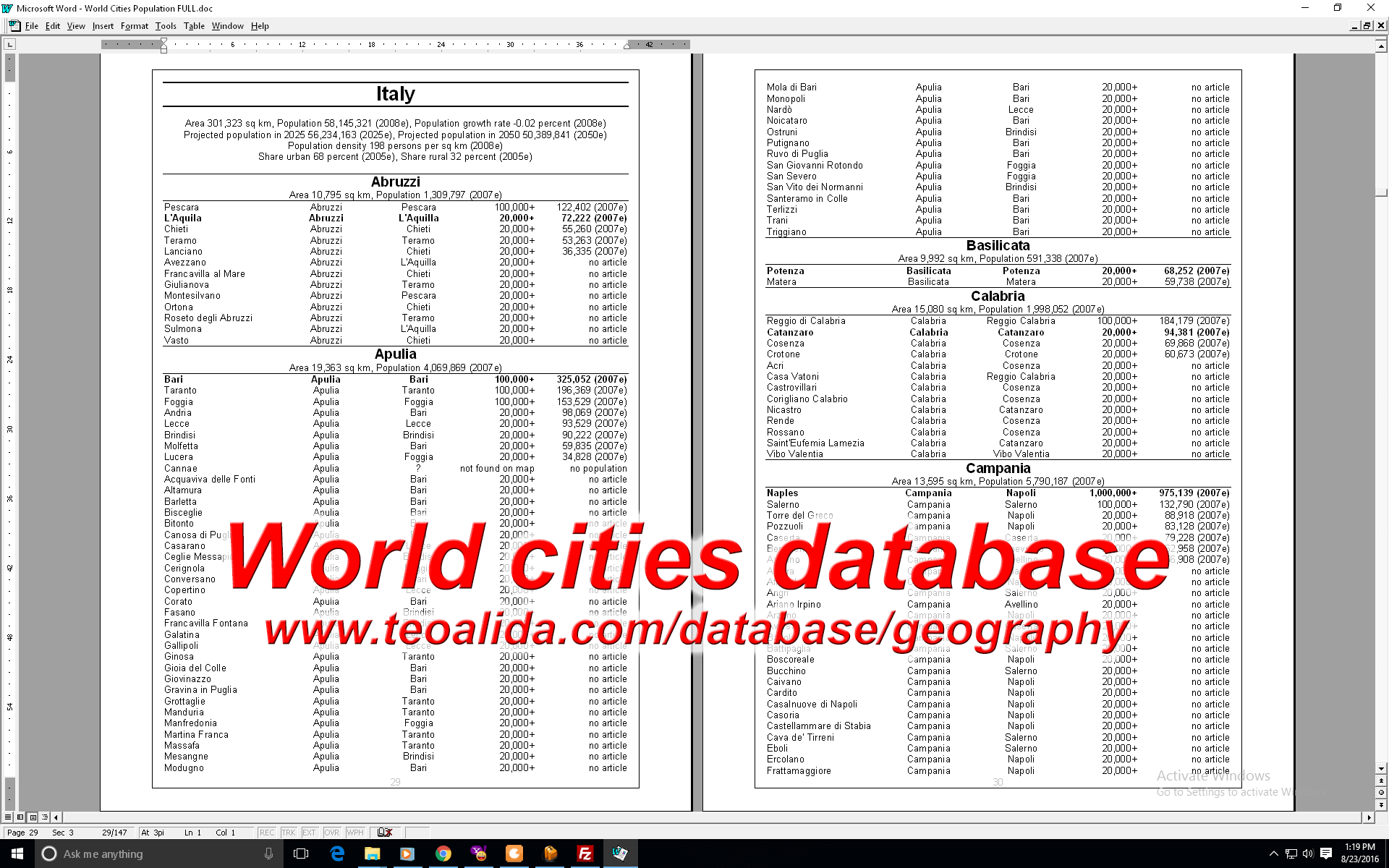 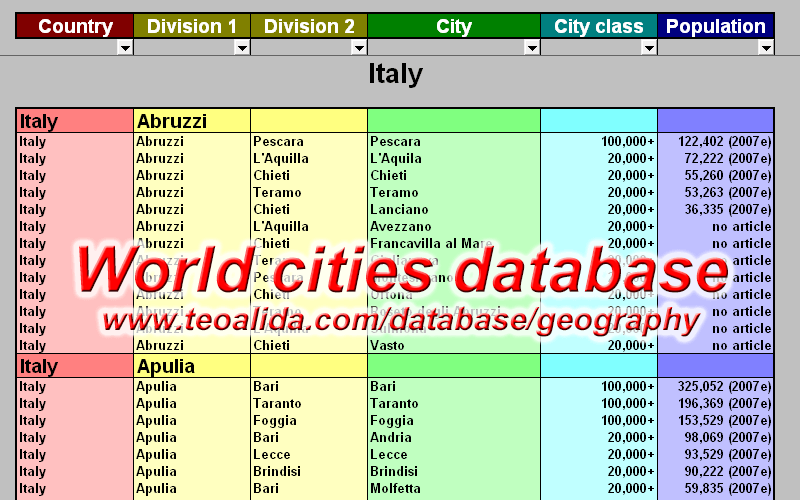 This is a handmade database that I started in 2003, sourcing data from Encarta Encyclopedia 2002 that I got from a friend. It was the ONLY recent geography encyclopedia I had in my hands, all others being world atlas books from my parents childhood (1970s). I did not had connection to internet until 2005 to get other sources of data. Over next years I improved the Word file using Encarta 2006 and 2009, completing all countries. Since 2016 I offer an Excel version beside Word file, and also updated all countries to Encarta 2009.

Being an original product “Made by Teoalida”, you will NOT find this database elsewhere on internet.

Don’t forget to check other databases made by me (100+ databases).

Based on feedback from customers, I realized that most purchased city database for web development, making drop-down boxes for country, state/province, city, thus city population was not required, but classifying cities by population helped them to shortlist database to major cities only.

Sales of city database been far lower than sales of car database and other databases made by me, but if more people continue to buy it AND require more cities, I can add also 20,000-100,000 cities from North and South America, Western Europe, South Asia, Japan, China, Australia, etc, which may raise number of cities in database to about 15,000-20,000.

How many cities do you need?
Created with Poll Maker

Cities are classified according icons used by Encarta Encyclopedia 2009, the icons do not always reflect population indicated in city article. For example there are cities with icon of 1,000,000+ but having population around 900,000, as well as cities with icon of 500,000+ but having population over 1 million. Most cities under 100,000 do not even have article to indicate exact population. This was Encarta Encyclopedia, the only resource of information available for me before connecting to internet.

Database does not indicate cities administrative status, which vary from country to country so making a single worldwide database of official “cities” excluding towns, communes, villages and other places pose major troubles, especially since few countries does not have any “city”.

For example: Romania have officially 103 municipalities and 217 towns, but my database include 116 cities that have icon of 20,000+ population in Encarta Encyclopedia. Germany have 2058 “towns”, Italy have 7954 “communes”, Spain have 8122 “municipalities”. Italy and Spain do not have “city” or “town” designation. If I would source data from census websites of each country, or Wikipedia, harmonizing all countries into a single database would be a HELL.

Classifying cities according Encarta Encyclopedia helped me to make a harmonized database all over the world. Consequently, number of cities in each country is nearly proportional with country urban population, in average for every 800,000 country population living in urban areas, there is 1 city over 100,000 people.

Geography is my oldest hobby, starting around 6 years old I was studying geographic atlases and already learned all the countries and capitals. Between 1998 and 2005 I done few works in Word / Excel based on World atlas books or digital encyclopedias, updated them and published on website for first time in 2015.

2003-2005 – I compiled list of cities of Europe, former USSR countries, Middle East and Africa. Using Encarta 2002, which have a limited amount  of cities shown on map so I was planning to include ALL cities shown on map, meaning cities over 20.000 people, but for biggest countries of Europe would have been too many so I have included only cities over 100.000 people.

2005 – my family installed internet connection. I discovered Wikipedia and no longer saw a purpose of making my own world cities database, the internet provided already up-to-date population numbers and updating my table constantly is a waste of effort. I left geography and migrated to other hobbies such as architecture, without finishing the list of World Cities as intended (to include all cities over 20,000 people from EVERY country).

2006-2007 – I included few more countries: China, Japan, Mexico, etc, using Encarta 2006, this one having a lot more cities shown on map, would take a lifetime to include all, so I decided to include only cities over 100,000+ people. Then I let the city database abandoned.

2015 – given by the success of one of my other hobbies, Car Database, which turned into a business by selling Excel databases to companies and web developers, I started questioning whenever the World Cities hobby, if converted to Excel, may be useful for web developers for CSV and MySQL databases. I published for the first time the incomplete city database on my website, one-country SAMPLE, inviting people to contact me if they wants the Word file for free, or Excel conversion as paid service.

2016 August – first person contact me to ask for city database. An Indian wanted list of cities in Excel, I offered him to convert the Word to Excel but he was not patient and asked me to give what I currently have (the Word file). However, I started converting it to Excel to be ready for sale when next customer is coming. I created 2 Word files, both containing all countries, LITE one containing cities over 100,000 and BIG one contain cities over 20,000 by province, plus the Excel file similar with Word BIG file, and put them for sale so people can buy directly (instead of contacting me to get complete database). Also expanded the article to get more traffic from Google.

By November 2017, 5 people purchased it, reason for which I decided to offer an update adding more cities from specific countries.

Database with 3 million cities, towns and villages, with GPS coordinates

NEW: in 2019 one of my programmer partners has shared with me a HUGE world city database with few million rows, with permission to sell via my website.

Excel can display max 1,048,576 rows that include cities from Andorra to Greece, but opening in Notepad shows that database ending in Zimbabwe have 3,173,958 lines. Obviously not all are cities, most of entries are actually villages. Each row include latitude / longitude.

In November 2017 one customer gave me his world city database in exchange of a database made by me, with permission to resell it on my website.

This world city database contains 76,799 cities, sorted by 212 countries, 51 US states, 13 Canadian provinces, 4 UK countries. For other countries it do not contain administrative divisions. The database focus primarily on United States, as it contains 43,299 cities from US compared with 33,500 cities from rest of world. Price: 1 dollar per 1000 cities.

Government census websites may provide complete list of cities in their countries, for example http://censusindia.gov.in/Tables_Published/Admin_Units/admin.html – List of Towns in India – 5161 towns.

I think about compiling a database from all countries, sourcing data from government websites. With ~200 countries in the world, this will be a huge effort. I would choose to make this database without population because each country have different census year. Anyone interested?

Romania city population .XLS – I made this originally in 1999 in Word sourcing data from books then remade in 2006 in Excel format sourcing data from Wikipedia pages of each city (hours of work!). It does contains all 320 cities of Romania with their population at every census from 1912 to 2011 (next census probably in 2020) except when they did not had city status at the census year. Why Romania? Because here I was born.

United States city population .XLS – including 304 cities with over 100.000 inhabitants. Source of data: Wikipedia, copy-pasted in Excel and enhanced visually. Contains population at 2010 census, 2015 estimate, as well as area, density and GIS coordinates, latitude and longitude.

If you want for other countries, please ask!

In 1998-2003 I also wrote lists of natural features, seas, rivers, etc, and astronomy-related stuff…. all in Word. I started using Excel more than Word in 2003. Today I consider them useless because such info exist for FREE on Wikipedia and is not necessary to make my own databases.