This is one of the “legacy” databases started in 2003, typing data from AutoKatalog car magazines into computer. The original database I abandoned in May 2019 and replaced in 2020 with a filtered version of German Car Database. Last update: 6 April 2021, see changelog. 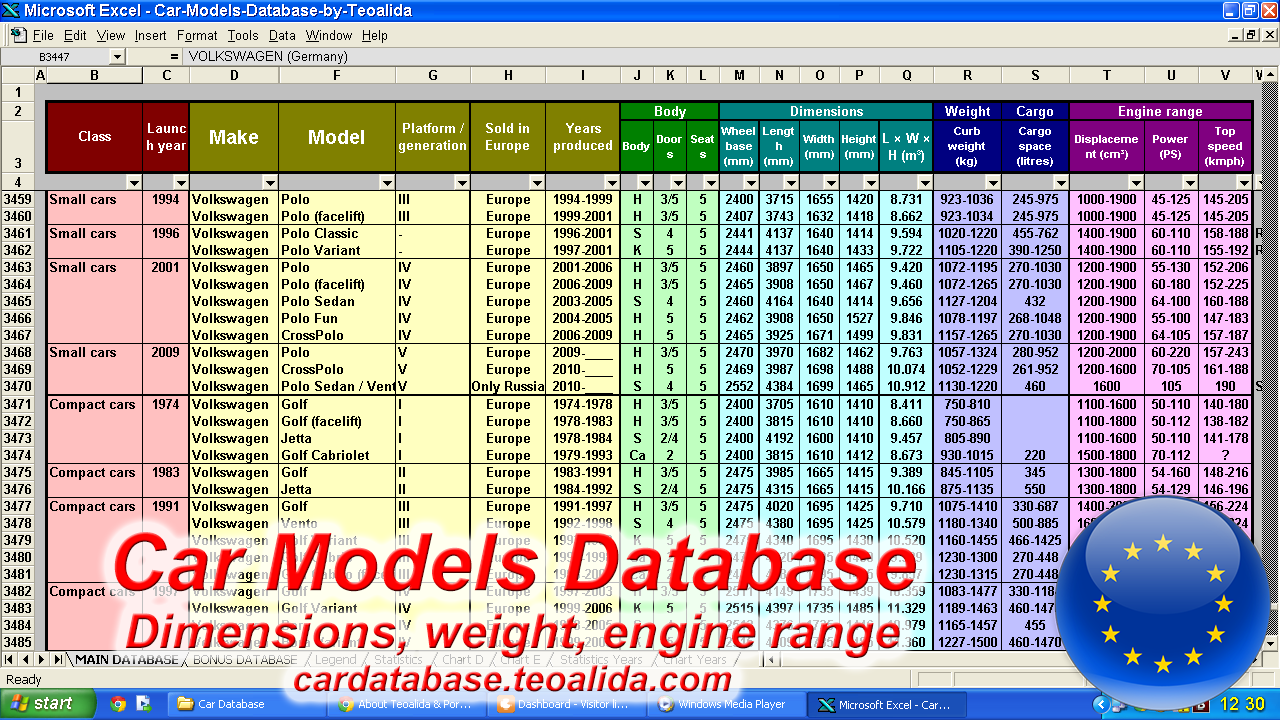 At least one customer bought this Car Body Specs Database (SURPRISE!) not for body specs, but just for list of car body types. Previously I was adding car models only when/if data of car dimensions was available, but since 2013 I choose to add EVERY car manufactured after World War II (as ultimate goal) even if no dimensions are available, over time I may find dimensions and complete the table.

In 2015-2019 the database was looking like THIS: Car Models Database SAMPLE .xls

Source of data: AutoKatalog for 1980s-present (99% data completion and accuracy guaranteed), and Wikipedia for older automobiles (expect some mess and missing data in pre-1980s). All data written manually in Excel, making an original product “Made by Teoalida”.

This vehicle database focus on model only and breakdown for body type (sedan, wagon, coupe, convertible, etc). There are NO list of car engines. For breakdown by individual engines, see Car Models & Engines Database.

List as September 2017. Italic makes to be added in next releases. Additional minor makes may be added in the future.

I was thinking in March 2016 to offer a major update for Car Models Database after Car Models & Engines Database will be fully expanded to 1970, I will recheck every car and add correct dimensions, weight and engine range from the expanded bigger database. Until that, I will offer minor updates with new cars added and with dimensions only.

Some things are yet to be decided:

During 2017 I expanded Car Models & Engines to 1975 using AutoKatalog books, leaving 1970-1975 to be added at later stage, but meantime I created additional car databases for other continents, using automated web scraping software, and they sold so well making me to lose interest for this original European database. www.ADAC.de which was once time ago 1990-present only, was redesigned in February 2017 adding car images and during 2017 was expanded backwards to 1950, then in March 2018 I added commercial vehicles in Car Models & Engines Database sourcing them from ADAC.

In 2019 I realized that compiling data manually from AutoKatalog have NO advantage over using web scraping software to extract data from ADAC website, and decided to recreate whole database, based on ADAC. I drafted a SAMPLE: Car Models Database new proposed format.xls. Feel free to suggest changes.

I could potentially start this project in January-February 2020, but due to ADAC website redesign in December 2019, followed by on-going changes in model hierarchy in 2020, I decided to put this project on hold a bit until ADAC settle up its model hierarchy… to avoid needing to re-do same work again in the future. I started in July 2020.

I copied 1st model version of each of the 5451 model series of German Car Database and used Excel ARRAY formulas to generate MIN-MAX ranges for dimensions and engines and published a BETA version on 12 July 2020 having a bit too many rows and some duplicates because ADAC Datenbank classify every minor facelift as new model series. Work in progress to eliminate facelifts that did not changed car dimensions to reduce duplicates.

By this way, the new ADAC-based Car Models Database include production years as month/year instead of just year, also car images and unique ID that you may find useful at future updates to see what rows been added/changed.

Do you need assistance in choosing the best database? Have custom requirements? Found errors that need correction?