New database made in April 2019, for someone interested in companies, tenders, architects and engineers involved in each building construction. 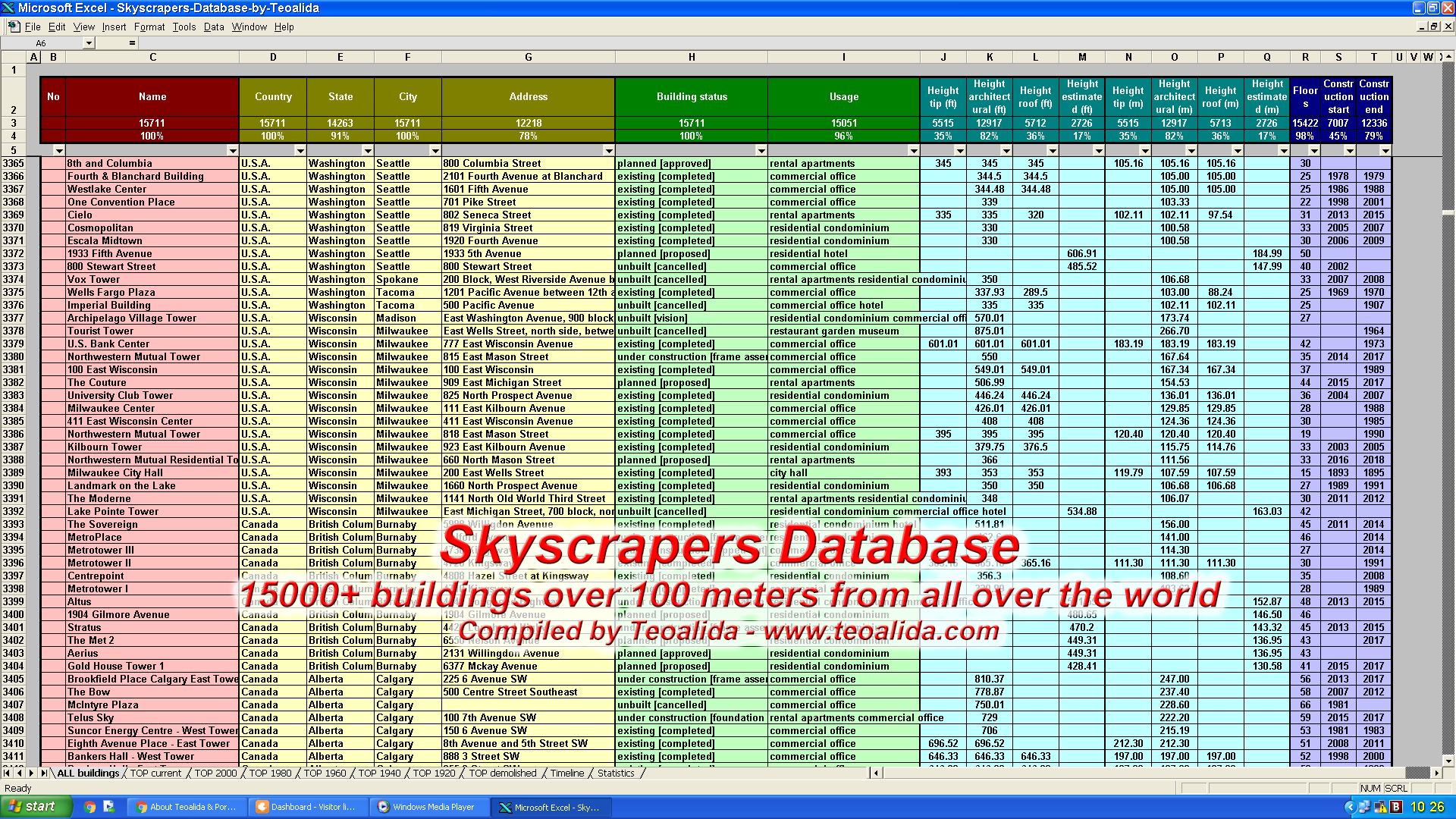 After making databases of HDB and condos from Singapore, as well as public and private housing estates from Hong Kong, and other databases, I learned to use web scraping in August 2015, and in November 2015 I started making a database of skyscrapers, to showcase my ability extract data from websites and create larger databases that I could do copy-pasting data manually, and for my personal interest in studying evolution of skyscrapers over history.

I published it in January 2016, having over 15,000 buildings taller than 100 meters. Under construction buildings are included so the database will be valid for next 3-4 years.

How the Excel database was made:

I identified on map the cities with many buildings, check them on Emp0ris, made a list of skyscraper URLs for each city (most cities checked do not have any skyscrapers), then input list of URL in www.import.io (it was free until April 2016 when it turned into a paid service) to get details about each building and put in Excel table, then enhance Excel table, remove day/month from construction dates (leave only year for easy historical analysis), etc… dozens hours of work!

How the Excel sheet can be used:

I offer buildings database as web scraping service. Contact me for a price quote based by your requirements (worldwide or a list of specific countries, skyscrapers only, buildings over X meters, etc). If you want updates in the future you need to pay each update 50% of initial price.

In April 2016 someone seeing my skyscrapers database asked me if I can create a database of buildings in Ontario state of Canada. DONE!

In November 2016 another customer asked me if I can make database not just for skyscrapers but also high-rises in United States! DONE in about 5 days!

He further asked to include low-rise buildings. So I decided to re-scrap website with all types of buildings and also included all 50 data fields and no just the ones of my and his interest. DONE in about 2 weeks, including 20 hours of manual work to build the list of URLs for all buildings then many hours of scraping. Had to run in batches of 2000 buildings (taking 15 min each) because of IP blocker, then join the files and re-scrap blocked URLs. A huge effort than deserve this price, not counting highly valuable information collected.

These 163,938 buildings are not all buildings ever built, but all buildings included by Emp0ris as December 2016 (except New York City, note below). Maybe not 100% complete, but still the BEST resource of building information that you can get. They usually include famous buildings, and most (if not all) large public buildings, commercial buildings, churches, etc. But in case of residential buildings, most of them are not considered famous to be included.

Note for New York City: this is the only city in the world where every single building does exist on Emp0ris, including 390,000+ low-rise buildings and 320,000+ houses (more than double of whole rest of US). Would have taken extra 30 days to scrap them all, and the customer said “need few dozens buildings from every US city” and “in case of NYC scraping high-rises and skyscrapers is more than enough”.

United States is well-known for skyscrapers, but in reality only a small area in the downtown have skyscrapers, and the era when United States was the only country with skyscrapers ended long time ago. A lot of high-rise buildings were built since late 19th century. What is less known, is that early skyscrapers were not so well received by population and most US cities set height limits to counter the “skyscraper race”, but in New York the law failed to be approved, so taller and taller skyscrapers were built. Early skyscrapers had continuous facade at street line, ugly side walls and airwells, making street to look like canyons. 1916 Zoning Resolution prevent buildings to cover entire plot of land.

The 1930 recession ended skyscraper construction in North America, for about 30 years no more tall buildings were built. Between 1933 and 1953, in entire world were 19 buildings over 600 feet (183 m), all of them located in United States, 17 of them were in New York alone (source).

A thing less known, Russia attempted to take away the title of world tallest building from USA, with Palace of the Soviets started in 1938, but due to the World War II the construction was abandoned. After war, seven smaller but still megalithic buildings were built. Moscow State University completed in 1953 was the tallest building outside United States, until 1975.

Asia started building skyscrapers with over 200 meters slowly during 1980s and nowadays it have most skyscrapers under construction.

Singapore’s UOB Plaza was tallest building outside United States between 1986 and 1989, and remains tallest in Singapore due to the height restrictions.

Malaysia surprised whole world in 1998 when completed Petronas Towers with 452 meters, taking the title of world tallest building from United States, and now is constructing KL118 with 635 meters, which in 2020 will become 3rd tallest in the world.

Buildings over 500 meters have been proposed also in India, Indonesia, Philippines, South Korea. These countries may join the race during 2020s. How the earth will look like in 2050?

Latin America has been building skyscrapers since 1930s, Martinelli Building (built 1934, 130 meters), then Altino Arantes Building (built 1947, 161 meters), being also the tallest building outside United States. But the evolution was slow and not much taller buildings were built over years. Presently Brazil does have few hundred buildings over 100 meters, mostly residential, but the tallest, Mirante do Vale (built 1960), is only 170 meters. Tallest skyscraper in South America was Parque Central Complex built in 1983, only 225 meters until 2014 when Gran Torre Santiago was completed, with 300 meters.

Europe is the place where skyscrapers enjoyed little popularity, except Russia. Most skyscrapers of Europe are located in Moskow. Eiffel Tower was the tallest structure in the world from 1889 to 1930.

Middle East does have relatively few buildings over 100 meters but between 2012 and 2015 it had the two tallest buildings in the world, Burj Khalifa and Makkah Royal Clock Tower, and now is building a new world’s tallest, Jeddah Tower, 1 kilometre high.

Statistics based on original database made in January 2016 (15727 buildings).

Countries with most buildings:

Cities with most buildings:

See how many tall buildings were built starting from 1980s and especially during 2000s, probably helped by computer technology. How the world will look like in 2050? 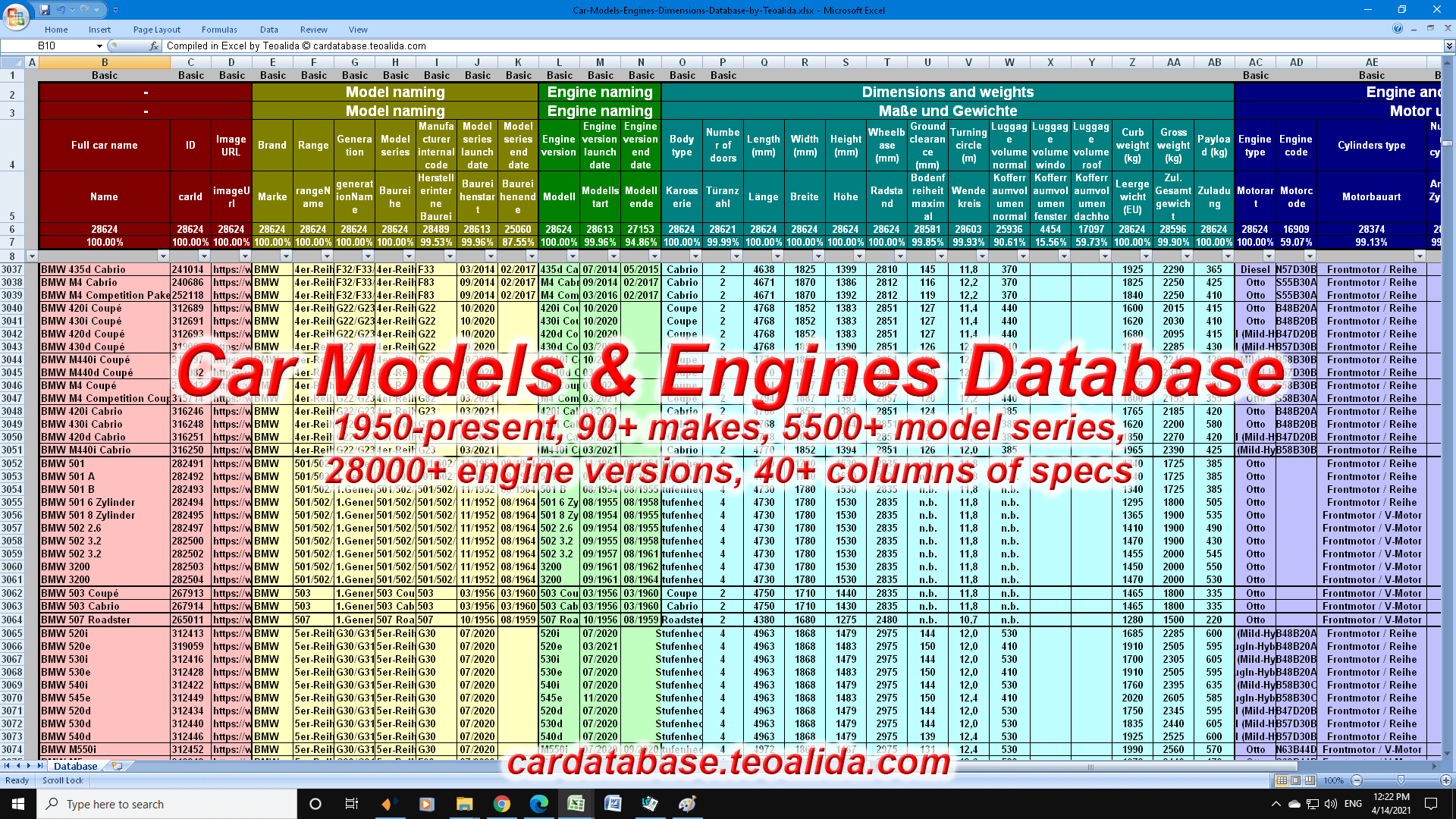 Index of databases made by Teoalida 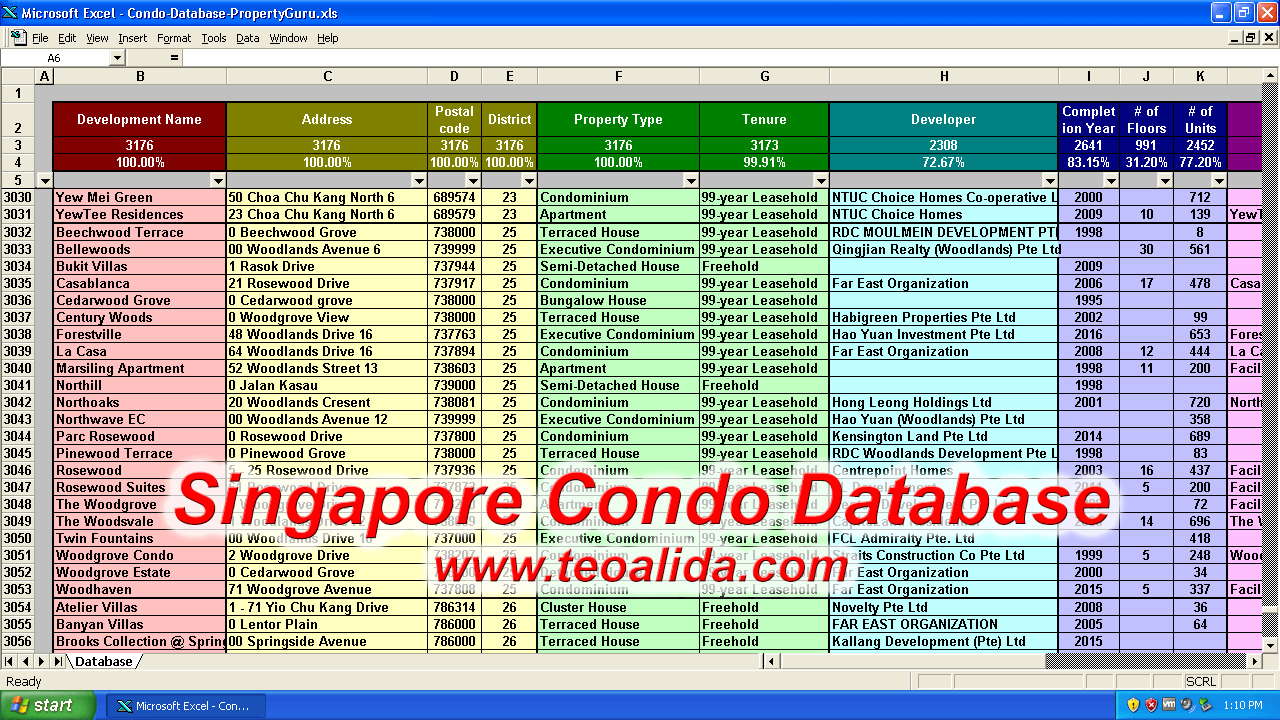