Latin America have a wide variety of housing, from ultra-luxury apartment towers to slums, sometimes next to each other. “Verticalization” is a symbol of progress, real estate developers are building numerous apartment towers aimed to middle class, at same time there is massive deficit of affordable housing.

Brazil is rich or poor country? YES it is… both! 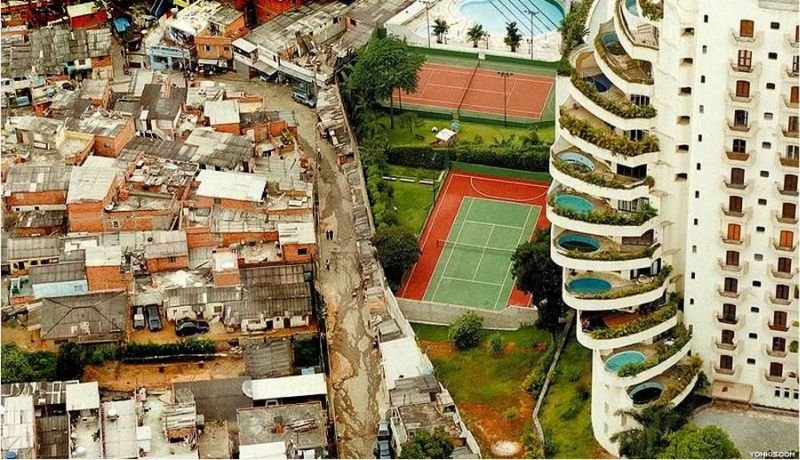 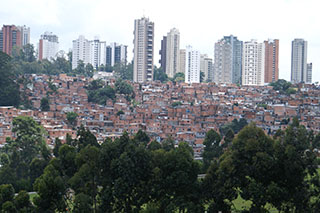 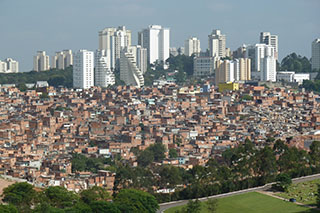 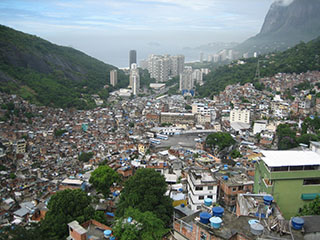 Latin American cities are more denser and living costs are lower compared with North America, but due to rapid and unplanned urbanization, infrastructure is worse, parks and green spaces are scarce. Latin America share some of problems of North America, poor public transport, pollution, crimes, corruption and gang life (especially in Mexico). Although certain countries in Latin America have high human development index, the income inequality is huge, leading to high crime rate.

Brazil is the most studied country by me outside East Asia, having large amount of apartment buildings.
Mexico is the richest country in Latin America but proximity to United States made it to have highest cost of living.
Argentina and Chile have higher GDP per capita than Brazil, but I do not like their cities, even Buenos Aires and Santiago have too many landed houses and little green spaces.
Bogota have many large-scale apartment complexes (If you love studying apartments).

I love the buildings individually but I hate the cities as whole. Latin America is an urbanization disaster, apparently there are NO LAWS to regulate density, plot ratio and distance between buildings. Random houses are demolished and replaced by 20+ storey apartment towers, especially in city center or near beaches, then new towers are built in front of existing towers, at only 6 meters apart.

Santos city is best example of crowded waterfront. The combination of sandy ground, narrow buildings and digging for foundation of new building, made Santos city known for leaning towers, seen in this Youtube video. It is unbelievable how authorities allow people to live in dangerous buildings. 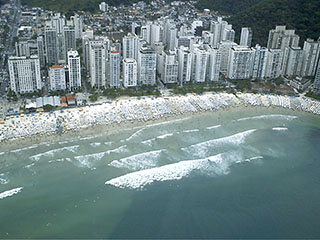 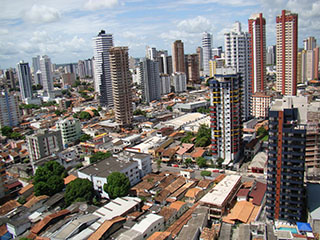 Favelas (slums) are home for 30% of Brazil population. Rio de Janeiro’s beautiful natural landscape is destroyed because all hills are covered in favelas. Sao Paulo launched in 1992 “Projecto Cingapura” to demolish slums and relocate residents in apartment blocks, inspired from the success of HDB in Singapore. Out of 100,000 units planned, 14.000 have bee built between 1995 and 2001, project proven to be unsuccessful and has been abandoned, residents did not liked the modern apartments and moved back to slums.

Currently the government focus on improving living conditions in slums rather than replacing them. Favela da Rocinha is biggest and most developed slum in Brazil with a population estimated at 100,000, today almost all houses are made from concrete and brick and have basic sanitation, plumbing and electricity. It is (probably) the only slum / shanty town in the world that became a major tourist attraction.

You can see many photos with beautiful apartment buildings on Panoramio real estate agent’s pages.

Which is the best city in Brazil?

Difficult question… the capital Brasilia may be the best from most points of view, Sao Paulo have highest GDP per capita but it is also one of the most polluted cities in the world, so living in Rio de Janeiro may be better (especially in Barra da Tijuca neighborhood which have a HDI 0.970 that is higher than any country of the world), it is also the most visited city in southern hemisphere. Florianópolis is the city with highest HDI 0.905. Curitiba was the first city with Bus Rapid Transit. Various smaller cities got high ranks in terms of quality of life and Human Development Index, because do not have favelas in city proper that would drag ratings down (favelas do exist in nearby cities).

Brasilia is the biggest planned city of the world, by architects Lúcio Costa and Oscar Niemeyer, and the only modern city inscribed in UNESCO World Heritage Sites (since 1987).

Construction started in 1956, and the city was inaugurated on 21 April 1960, after 41 months, some people are saying that was built in 3 years, this is not true, the building process continued after inauguration and continues even today. It became the biggest city of 20th century which do not existed at beginning of century. Originally planned for 400.000 people, today houses about 2 million people, but I am not sure if this is the city itself or includes satellite cities too. Most of population living in apartment buildings up to 6 floors with large green spaces between them.

Brasilia is also infamous for the way it was planned, a “city of cars”, with free flow of traffic and traffic lights would not be necessary, which served only for a small part of population who owned cars. There are too few pedestrian areas and crosswalks, people had to risk their lives crossing the north-south highway. 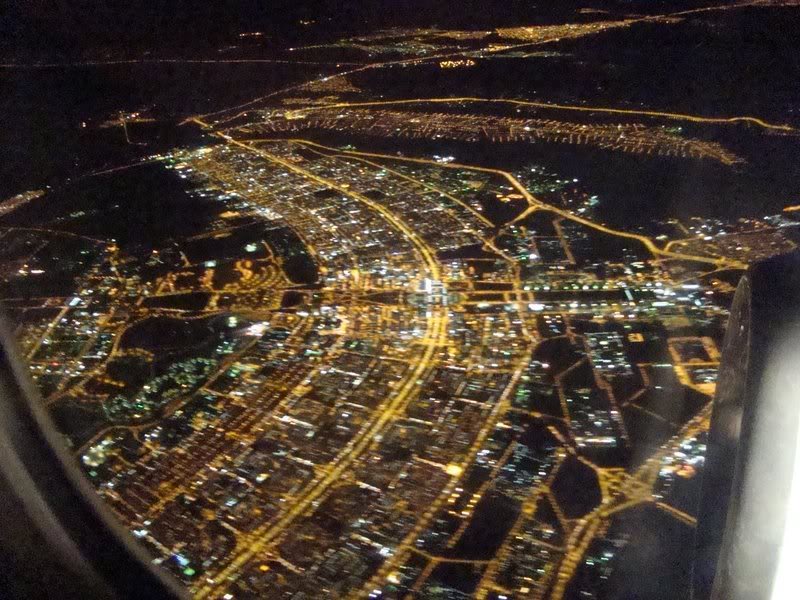 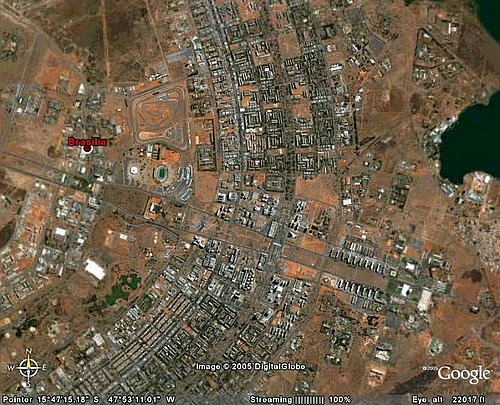 Sao Paulo is considered one of most vertical cities in the world, having hundreds of residential towers in 20-30 floors range but very few over 30 floors.

The technology progress started a boom in skyscrapers construction all over the world during 2000s, but as 2020 Brazil still do not have buildings over 300 meters. See List of tallest buildings on Wikipedia.

Apartment sizes in Brazil increased over the years

Another reason for which I love Brazil: most real estate developers publish floorplans (unlike USA), just search “planta apartamento” on Google Images and you will see a lot, most floor plans indicate dimensions.

Edifício São Vito was built in 1959, 27-storey, 624 units of 28 sqm apartments, floorplan and more info (I do not know if it was an isolated case or apartments of this size were common), evacuated in 2004, demolished in 2011, enough to be vandalized and become the most infamous building in Sao Paulo, but many people still opposed demolition. Bigger apartments were built over years, since 1990s or 2000s more and more developers offer apartments in 200-500 sqm range.

Most apartments have small rooms inside and big balconies with glass rail, apparently the prestige of building is denoted by length of balcony, a waste of space in my opinion. In some cases, the biggest “room” is the balcony, examples: Verum-Mooca, Stellato Chácara Santo Antônio, Reserva Jardim Sul (I need opinions from local people about this strange phenomenon). An unique feature in Brazil is the barbecue pit in balcony (common for apartments above 60 sq m)

Few of the SMALL apartments I found:
This 2-bedroom apartment is just 33 sqm (internal area): floor plan.
One of the smallest apartments with 3 bedrooms, just 57 sqm (saleable area): photos and floor plan.
jetdicas – horrible apartment with living room smaller than bedroom, putting dining table as suggested is not possible 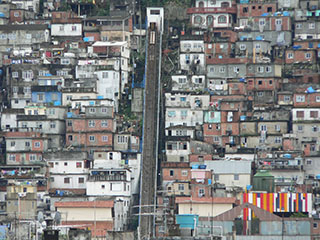 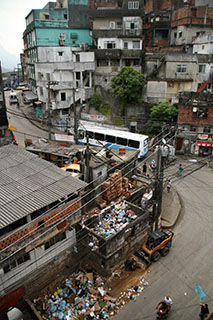 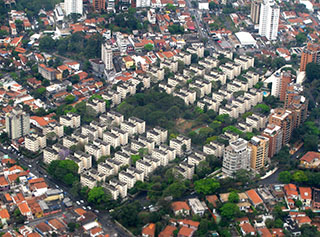 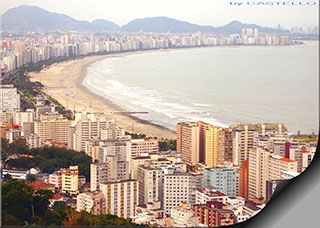 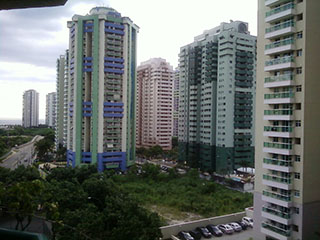 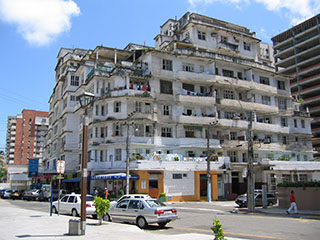 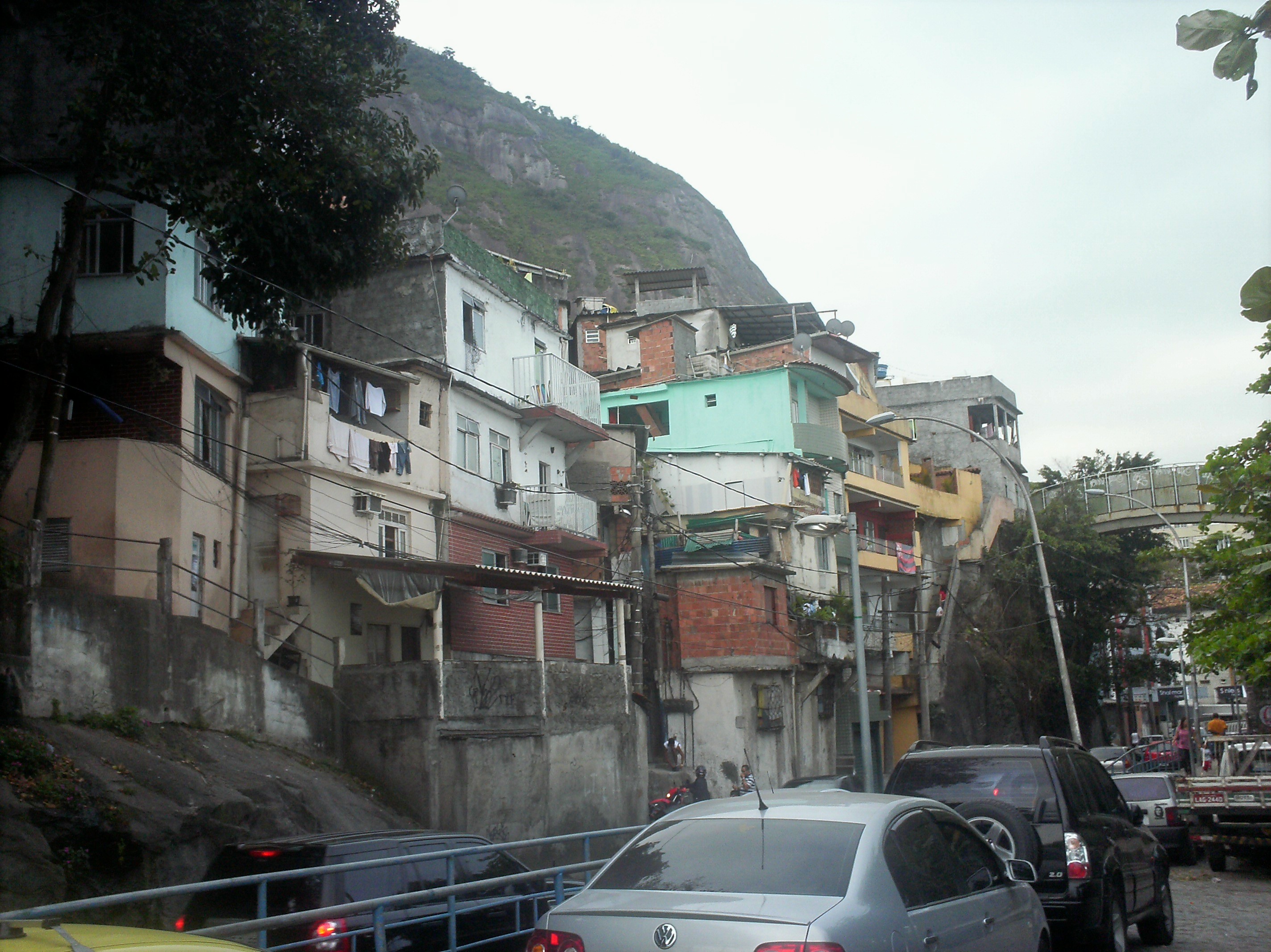 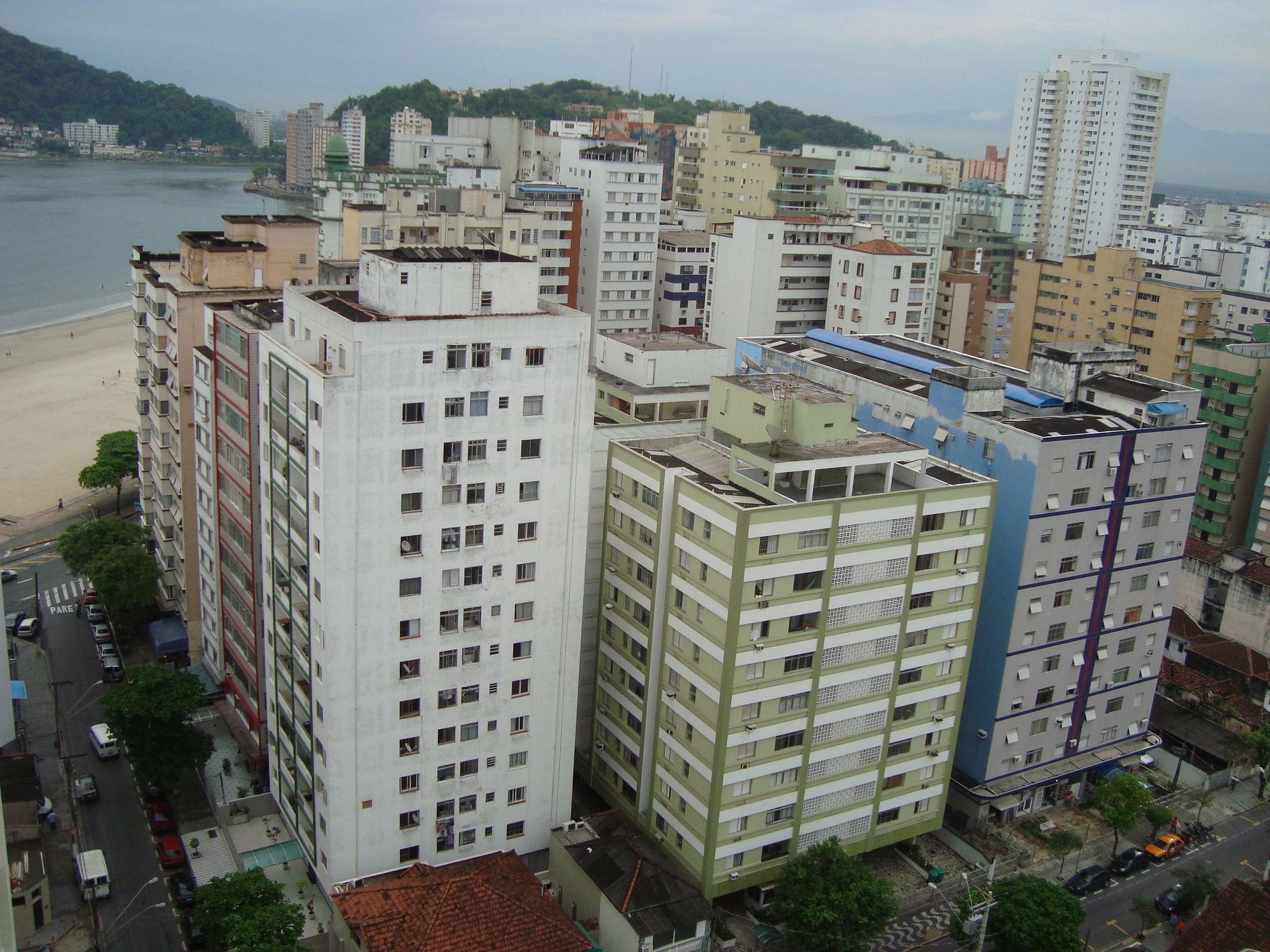 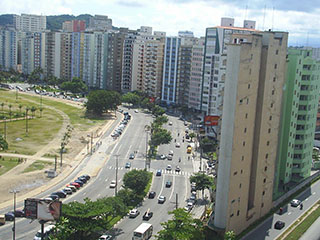 Mexico is subject to urban sprawl similar with United States, high-rise living is not popular, possible due to earthquakes, and only office buildings in downtown are tall.

Mexico City is famous for its grid neighborhoods (in newer neighborhoods the grid streets are broken into cul-de-sac). Some of them are public housing (casas de interes social) but some private developers follow same grid style. You can find floor plans search in spanish “planta casa” on Google Images.

Most common housing type is terraced houses 3 meters wide and 10 meters depth, with 2 floors and 2 bedrooms. The second densest housing system in the world after Philippines houses (legally-built – no slums), being up to 150 units/hectare, 44 meters between street axis. Some terraced houses are single floor, these being 12 meters depth and just one bedroom. Some neighborhoods feature semi-detached and quarter-detached houses. Other neighborhoods feature apartment blocks ranging from 3 to 5 storey, built at 4 meters apart, these reaching 300 units/hectare.

They are criticized for being too small for people needs, shared walls, poor quality, lack of utilities or amenities, residents travel 1-2 hours to reach workplace. Many owners expanded their houses in front or upwards, sometimes reaching 4 floors (see below photo), destroying the neighborhood beautifulness. Personally I do not understand what is so bad to have shared walls, many people in Europe and Malaysia live in terraced houses without problems. 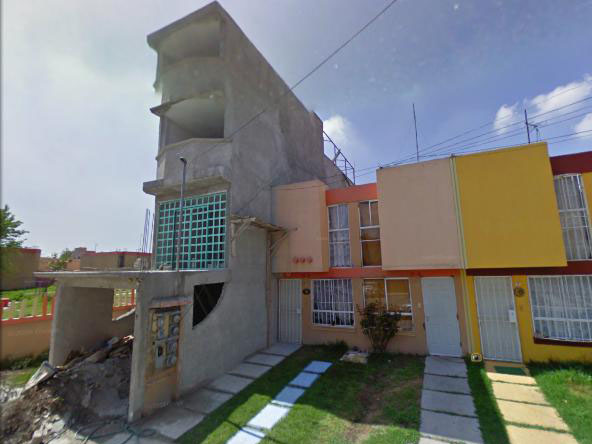 Iquitos, Peru is the largest city in the world that cannot be reached by road, but only by airplane or boat, with the exception of a road to Nauta, a small town roughly 100 km south (which is not connected to the country’s main road network). Ocean vessels of 3,000 to 9,000 tons and 5.5 metres draft can reach Iquitos via the Amazon River from the Atlantic Ocean, 3,600 kilometres away.

Page published for first time in 2010 and updated over next years with more information found by me or provided by visitors. Text written by me (Teoalida) and images taken from Wikipedia, Panoramio and other websites. Do you have useful information that worth adding? Did you found an error or have a contradictory opinion? Leave a comment! 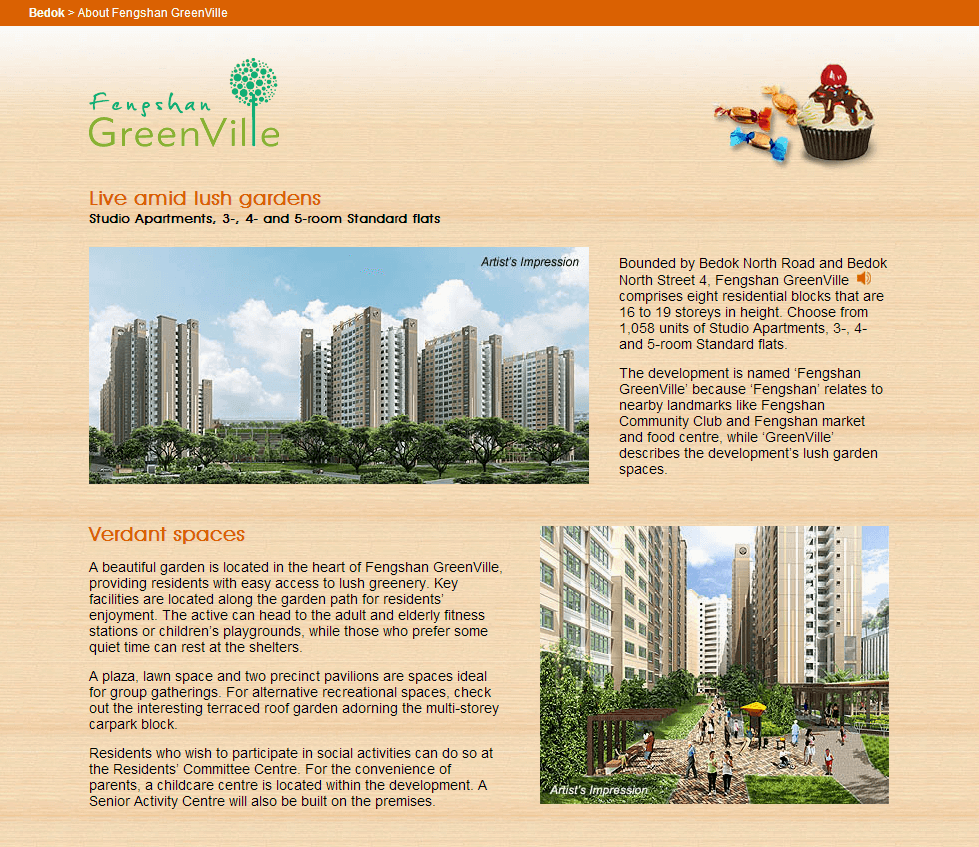 I starting collecting the PDF brochures of BTO projects in December 2009. Saved every brochure in my computer and uploaded them here because HDB do not keep them available for more than 2-3 years and many people are needing brochures of older projects, especially when applying via Sale of Balance Flats.

The database has been purchased by several companies, including home insurance, telecommunication, door-to-door services, real estate portals, flyer distributors, as well as many people who did not told me what business field they are in.

HDB Resale Price Index DOUBLED from 2007 to 2013, dropped slightly to 2015 then stabilized. However, due to high supply of flats completed in 2014-2017 that enter on resale market since 2019, prices are likely to drop more in the coming years.

The 0.5% increase in 4Q 2019 contradict my prediction, does fall ended and another price bubble is coming in 2020? At same time, Coronavirus lockdown and circuit breaker may cause a bigger world recession than in 1997 or 2009 that will greatly affect Singapore private property market, and at smaller extent may affect public housing market too.

8 thoughts on “Housing in Latin America”

I need help at webdesign!

A message to all people who complain that my website looks like 1990s: I showed few themes to some of you, and you told me to buy them because look modern, I bought Neve theme on 1 May 2021, now some of you say again that website looks same 1990s shit.

I had dark blue header and titles, you complained “too many colors”, I changed to shades of gray, you complained again “too bland”. So what colors do YOU want? Read full story and advise me best way to redesign website!

Do you need assistance in purchasing? Do you have ideas of new projects or suggestions to improve my website? Did you found broken links or errors that need correction? You can contact me anonymously via website chat, or email [email protected].

Read my website in silence and cite as (name of cited page) + Teoalida’s Website, DO NOT ask free help from me at school projects, there are too many students to help each of you, and some of you engaged me in long pointless conversations, annoyed me with disturbing messages with NO benefits for me, just wasted my time from working at projects for PAYING customers. Use Google to find additional information yourself, or ask for help on Reddit / Facebook groups.