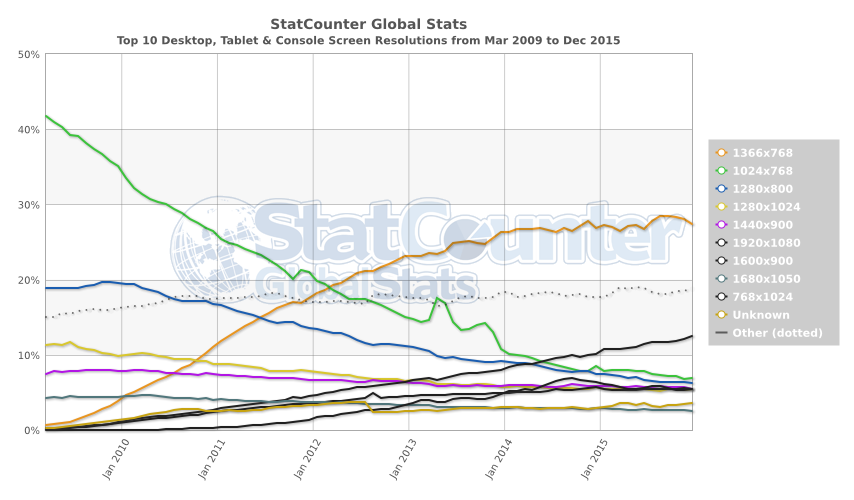 As graphic designer and enthusiast in computer history, I became curious how the monitor dimensions evolved over the years and analyzed which screen resolutions were most popular, so I created these Excel files:

Monitor size calculator .XLS – Excel table that calculate monitor dimensions (width and height) in mm, screen area, pixels size, etc. I made to display all monitor sizes from 14 to 40 inch, but you can write your own numbers.

Screen resolution by country .XLS – Source of data: StatCounter only.

First time I used W3Counter, then I found the highly-detailed StatCounter with its ability to download CSV, but I was not happy of historical coverage being 2009-present only, then I found NetMarketshare. I copied monthly data in an Excel table (the process took few hours) then I analyzed it, made charts about evolution of screen resolutions, etc. Then compiled the summarized table shown below in this page (most popular screen resolutions). I tried to find detailed statistics going back to 2003 at least to study the origins of widescreen bullshit, but no such thing is available.

I made this analysis in 2014, at the time I wanted to buy a new monitor to replace a 9-year old 17″ LCD. I updating monthly until January 2015. Lack of comments on this page and lack of positive chat messages from website visitors, gave me impression that nobody is interested in my analysis. I updated for last time in January 2016.

In 2017 StatCounter was redesigned and there is no longer possible to download full data in CSV format with one column for resolution and one row for each month, clicking “download CSV” show now only top 20 resolutions for whole period selected. NetMarketshare also removed screen resolution stats during 2017 or 2018. Even if I want to update above Excel files, I cannot do anymore, except W3Counter.

W3Schools – 2000-present stats but not detailed and unreliable (traffic of their own site only, high-end internet users).

Note: in United States and some European countries 1280×800 was most popular for a short period in 2009-2011 because people buy new laptops and throw away older 1024×768 laptops to poorer countries.

CRT monitors retain their sharpness at any resolution, this is why you can see some high-end CRTs capable of high resolution. For example 21″ CRTs can display 1600×1280 or 1800×1440 but you would prefer to use 1280×1024 to make text readable. 2048×1536 is the maximum resolution supported by VGA cable, thus CRT monitors were produced up to this resolution.

A trend of high DPI display was started in 2011 when Apple launched Retina display, which doubles number of pixels while keeping the size of screen elements. PC monitors and laptops did not adopt this trend quickly because of poor Windows scaling, certain elements retain their original size when you set screen scaling.

UHD, ultra high resolution, 3840×2160, popularily known as 4K, appeared in 2014 for high-end monitors but also laptops, using scaling is a MUST. They require HDMI or DisplayPort. Sony Xperia Z5 Premium (2015) was first smartphone with 4K screen, having 806 pixels per inch. This is a marketing hype, human eye cannot see more than 300 pixels per inch so putting more pixels have no use, it only drain battery faster.

The SAD part is that cheaper 16:9 monitors leaded to extinction of 4:3, 5:4 and 16:10 monitors around 2011. The stores bought what was the cheapest and the population was forced to buy what the stores sell, giving to manufacturers a false impression that nobody like 4:3 anymore.

Most popular screen resolutions and their peak markeshare

Note: reported screen resolution does NOT reflect monitor sizes. You can see in the above table 1152×864 (peak 3%+) and 1280×960 (peak 1.22%), despite that NO monitors were manufactured with this size. This indicate that many people set the monitor at lower resolution than native resolution.

On Windows 10 when you select 1920×1080 it sets scaling 125% automatically and browser report a resolution of 1536×864. Many people don’t bother changing default scaling, or do not like to have things so small on screen.

While Internet Explorer and Chrome report Windows resolution and scaling, regardless of the browser zoom, Firefox browser report resolution based on the zoom you choose in browser. It cause webmasters to see a lot of odd resolutions.

StatCounter allow you to filter data by every country, I found few interesting facts about different dominant resolutions:

Surprisingly, Russia have bigger screens than United States or United Kingdom, 1280×1024 dominated from 2009 to 2012, having over 30% marketshare in 2009 while 1280×800 never exceeded 17% (probably laptops are unpopular there, 17″ and 19″ monitors imported as second hand from Western Europe, and they run at native resolution).

The monitors I used myself

So, I bought a 20″ 1600×1200 with PVA panel from a shop selling used computers, it had a vertical line of pixels getting stuck randomly so I exchanged with a 24″ 1920×1200 also PVA panel. Shortly after this I realized that I can hack The Sims 2 settings and set any resolution I want. The 24″ 1920×1200 monitor broke after 1.5 years, luckily it was still in warranty and I got a replacement of same size but with shitty TN panel. I realized that should have purchased a new 1920×1080 from start.

In short, I accepted the switch to 16:9 just because this is the standard, NOT because I like it.

So where this 16:9 came from? It do not have significant history in computer or movies, it was chosen in 2008 as compromise format between the formats used by European movies (1.66:1) and American movies (1.85:1). But to be honest, 4:3 and 16:10 look much better in numbers. Several people attempted making petitions to standardize movie industry to 16:10 instead of 16:9.

People who watch movies often or play shooter games where FOV is important may like a wider screen, but I am not among them. As a professional, working often in AutoCAD, Word, Excel, Photoshop, a bit of coding, etc, I do not really find useful the extra width. Vertical space is more important. For certain projects I even put monitor in portrait mode.

Responsive websites that adjust automatically to any screen resolution are getting popular, but a lot of other things, such as image resolution cannot be changed without loss of quality, so dimensions of images need to be decided.

While arguing with my friends, I came to these myths:

Widescreens give you ability to have 2 windows side by side
ANY monitor can display 2 windows side by side, top by bottom, etc, but in most offices we work in a single software at time. “Wide” but less than ~1000 pixels vertical give me claustrophobic feeling. For hardcore multitasking you should get a widescreen of at least 1920 pixels horizontal.

Widescreens match HD movie formats
How often do we watch movies on computer? At office probably never, at home I can plug in my 40″ plasma TV which is widescreen anyway. Letterboxing is not a problem for watching just few movies on computer.

Widescreens give you better field of vision in games.
This is true. But not every computer is used for gaming.

Tags:Webdesign
previousDatabase of all buildings in Singapore with postal codes
nextMusic Database 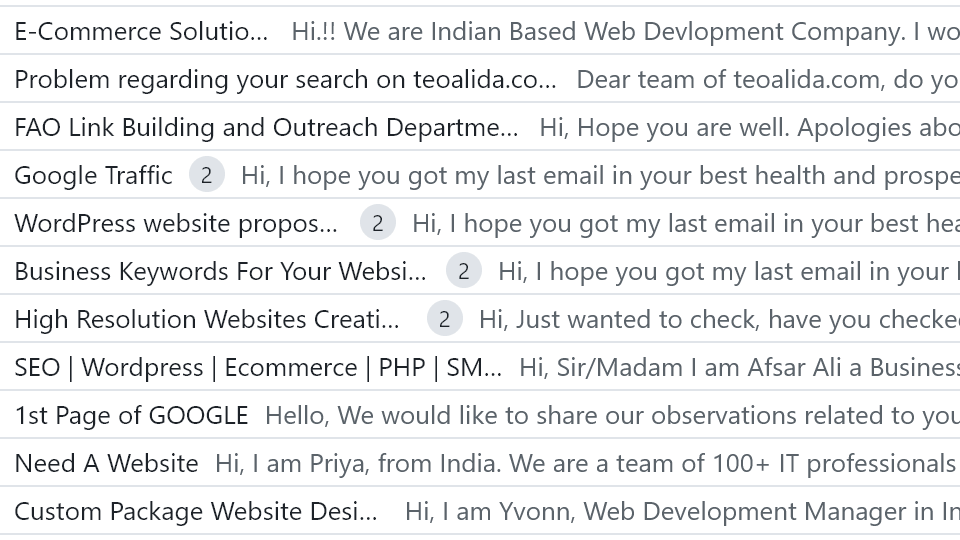 Tips and tricks for Webs users