I started compiling data voluntarily in 2009, purpose: personal research about housing density in selected estates and use the results in designing own apartments, I abandoned in 2011 after completing 40% because it required too much effort for a non-paid job.

Being a voluntary project done without any specific target, I changed my mind numerous times, making the database a MESS, table layout being different from town to town depending by the date each town was compiled.

In 2012 I published on website a SAMPLE with one town, as marketing experiment, to see who (if anyone) is interested. I was willing to re-compile entire database, this time as PAID service for professional use. I hoped people to tell their requirements or suggest changes in data structure, negotiate a price based by amount of effort needed to compile the data, then do the job… but I was facing with lack of feedback, LAZY customers do not inform me exactly what data are looking for!

Took 2 years to get a rough idea what people are looking for… and resumed working in July 2014, I done A LOT of changes in data structure, cleaned (most of) mess and standardized database format across all towns, completed whole Singapore in December 2014 in terms of block number, address and lease year. Number of units remained as done in 2011 (25% completed), the rest 75% will be done AFTER finding a customer willing to pay 50% before 50% after. The long-waited customer came in May 2015, work started, completing number of units for ALL 10,000+ blocks by June 2015! As customers requested, I added also postal codes in June 2015 and unit numbers in 2016, town council and electoral GRC / SMC in 2017.

History – original HDB database made for my personal research

HDB Database covered about 20% (western part of Singapore) in the simple 2009 layout and another 20% in the improved 2010 layout (pre-1980 towns). This 40% was more than enough for the original purpose (personal research). The format was a MESS:

Note that in 2009 I had no school or job, thus all day was free time… but since 2012 I work for people, customers paying me to do various things, thus I no longer have time for voluntary (non-paid) works…

In the same time I made a map of Singapore using AutoCAD, drawing all roads in certain HDB estates, and measured land size of various housing areas. Purpose: personal research about housing density in selected estates and use the results in designing own apartments.

In mid-2012, one of my other hobbies, the Car Database, had an unexpected turnout into a business. Since 2003 I was compiling car data in Excel for personal research, then in 2011 posted it on website, and after 1 year I realized that there are people willing to pay $ for such data.
So, I tried do do the same with HDB Database, for the first time published it on website, a SAMPLE Excel file with one town only… to test the market and see if anyone is interested and how can be used such directory of HDB blocks, to continue this megalithic work and sell it for money. But first, need to know what data people need, to not spend unnecessary time on unneeded data, standardize the table format for all towns and clean up the mess.

I was facing with LAZY people and lack of feedback, as happened in case of Car Database too, where took one year to figure out how to make a database appealing for customers to do the 1st sale, for one year.
People praised my initiative, many students wanted the HDB database for personal research, counting blocks, etc, flat buyers wanted the database to know lease year, etc. Sorry, but a 400-hour project is NOT something to do for free to help students and flat buyers.
I also met non-serious customers (see the comments at bottom of page), in the top of list is this this customer asking me if I am selling database but not answering my questions (it’s also my fault for not saying “I am selling the SERVICE of compiling a database“, not a ready-made database).

If BUYERS do not tell me exactly what data they want to BUY, how I am supposed to know what data to compile and SELL ????

I made 2 polls. As you can see, people voted to WAIT for a customer then do the megalithic work, however I never succeeded to make a DEAL in this way.
Seems that I need to complete the database in advance, to be ready for sale when the next customer are coming, taking the risk that customers may be looking for SOMETHING ELSE than what I am doing.

After 4 years of indecision, I resumed working in June 2014

If in 2009-2011 I was adding all possible data for one estate then move to next estate, NOW I am planning to complete in stages: finalize block numbers (taken from map), then start adding street addresses and then years (taken from HDB Resale flat prices), only after finalizing these, start adding number of units (highest time-consuming part of database), and so on.

I posted the incomplete database FOR SALE in Store, inviting people to tell me their requirements, negotiate a price, buy existing database for $100, then I will do the remaining part of job. Some wanna-be customers are so LAZY even to tell me what profession they are and what data they need about each block!

Free SAMPLES (these samples were posted at top of page until June 2015 when new version was ready)
HDB Database 2011 – original version as I done it in 2009-2010 for my research.
HDB Database 2014 DETAILED – coloured, visually enhanced, table no longer divided by precints, town summary removed, proposed to breakdown units by flat type – few hundreds hours are needed to complete database in this format.
HDB Database 2014 LITE – street, block, lease year = fewer data fields = only 100 hours are needed to reach 100% completion…
Breakdown by flat type is done only for Jurong West and Holland for purpose of showing in the SAMPLE, for the rest of towns will be done after getting 50% of payment. 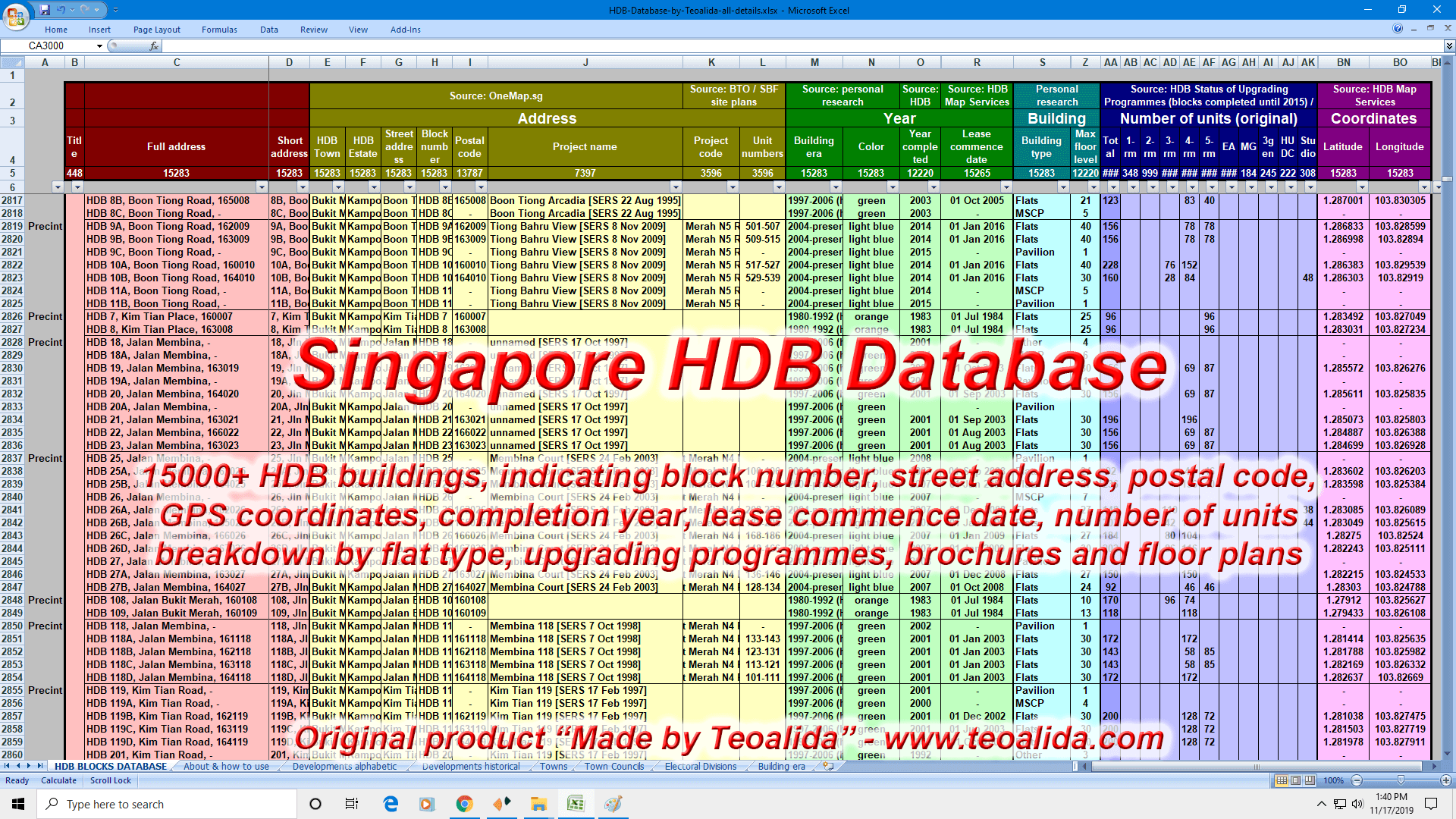 And the database was finalized!

March to May 2015: I am BUSY expanding Car Database which generate far more sales than HDB Database. Further work at HDB database can be done starting from June 2015.

First customer! On 3 May 2015, a real estate agent doing flyer distribution, wanted to view the number of units per all blocks at once. Too bad he purchased Yishun only. I started the job of adding number of units for Yishun, and next day I finished and we made the deal.
Anyone else wants number of units in ONE town? Will be ready in 2 days (or immediately in case of pre-1980 towns).

5 new customers contacted me in 20 May – 5 June. Don’t know if is a coincidence, or displaying the prices directly on page, per whole Singapore and per town, encouraged website visitors to contact me. There were 2 mini-customers, one wanted a list post-2000 blocks with 3-room flats. I sold him the list for ONLY $20.
But someone wants number of units in whole Singapore… and deadline set on mid-June!

Starting from 2017 I offer 3-month updates adding new BTO flats because along my customers I have a telecommunication company who is the first to demand fequent updates. Data for existing BTO such as lease commence date will be checked 2 times per year.

November 2017: 14789 buildings. Because 2 people purchased package with number of units breakdown by flat types and asked for postal code too, I decided to include postal code by default in all packages. The package with lease commence date also include GPS coordinates, and the cheapest package does not include additional details.

August-September 2018: spent over 100 hours counting floors of every HDB block, defining block model names and linking floor plans for 50% of blocks (the old ones) and BTO brochures for another 20% blocks new ones).

November-December 2018: 15092 buildings, after spending about 20 hours rechecking all old estates to find additional buildings built via upgrading programmes since last check in December 2014.

October 2019: 15218 buildings, added 18 missing buildings, mostly industrial HDB buildings, reordered columns and did some changes in table format to optimize for ZeeMaps, saved file as XLSX instead of XLS.

November 2019: 15283 buildings. Being the final-year update, I also posted new sample files and recreated packages according suggestions got from customers. Instead of a grid with 4 packages of columns, each available in 2 versions of historical coverage, I made a simple list of samples with packages for all historical coverage. Due to poor sales, I no longer post on website the BTO-era, HS-era, CRC-era packages, but I can sell them at request basis.