Design, Build and Sell Scheme was announced in 2005, giving private developers freedom to build and sell public housing in the way they sell condos. Being sold at ridiculous high prices without having any significant advantage over BTO flats, the scheme was a failure, thus DBSS land sales were suspended in 2011. 13 DBSS projects were built, having a total of 8650 flats.

Do not confuse DBSS with Design & Build scheme introduced 1991 which involve private architects but flats are sold by HDB at regulated prices.

Source for launch / completion date: Wikipedia, which do not provide some info for certain DBSS.

Note: I estimated average flat size using standard BTO sizes of 45, 65, 90, 110 square meters. In reality, DBSS developers have freedom to decide the size of flats, and all 2009-2012 DBSS are under BTO standard size. For example The Peak have 5-room up to 120 sqm while Parkland Residences have 2 types of 5-room, 105 and 108 sqm. I do not have brochures for all DBSS projects to check exact size. Note that these sizes include the oversized balconies and A/C ledge, so internal rooms are significantly smaller than BTO flats.

BIG note: Pinnacle @ Duxton is a Premium BTO but is commonly mistaken as DBSS. Probably because of its high-end design for public housing, but it was launched in 2004, while DBSS scheme appeared in 2006.

How DBSS was a failure

Design, Build and Sell Scheme was a hybrid between public and private housing, combining the WORST of both worlds. Built by profit-hungry private developers and managed by HDB after completion, DBSS flats feature extremely small rooms, oversized balconies and A/C ledges, are being sold at prices almost as high like Executive Condominiums, while they lack swimming pool, clubhouse, gym or other condo facilities (being public housing).

In order to gain profit, DBSS developers used poor quality materials and poor workmanship, consequently many scandals broke out since 2012 when DBSS projects were completed, people complaining about defects to developers and HDB: Centrale 8, and Pasir Ris One.

DBSS land sales were suspended on 4 July 2011 after the Sim Lian Group, developer of Centrale 8, set outrageous prices up to $880.000 for 5-rm in the project launched on 16 June, also the project was badly designed, blocks packed like sardines and flats smaller than HDB standard of 90/110 sqm, HDB asked developer to review of prices, which were reduced to $778,000.

The remaining 5 sites sold had their DBSS projects launched for sale until 2012, at similar 700k prices for 5-rm. A 14th DBSS site in Sengkang has been launched on 7 June but withdrawn next day at MND request due to Centrale 8 scandal, a 15th site planned at Bendemeer Road was never launched (source: AsiaOne).

Trivelis DBSS were the first new flats launched in Clementi after 10+ years, people rushed to catch one, and 4 months later they got angry when Clementi Ridges BTO has launched nearby in March 2012, having flats bigger and 20-25% cheaper than Trivelis (source: SammyBoy.com). When the project was completed in 2015, residents were upset over poor quality (source: theonlinecitizen.com).

I do not understand why people keep buying this kind of public housing which is priced almost like EC? I am curious what will be the resale price difference between DBSS and nearby BTOs. Do you think that a Trivelis 5-room DBSS (105 sqm, 88 sqm internal + 12 sqm balcony + 5 sqm A/C ledge) can be sold at higher price than a 5-room BTO (Clementi Ridges, 110 sqm internal, no balcony)? I guess that NOT!

First resale DBSS flats from The Premiere @ Tampines came on resale market in March 2014, being sold at prices only 10% higher than normal HDB flats. So I assume that, if the price index will be constant, owners of Centrale 8 and subsequent DBSS will earn less at reselling than the initial purchase price, as they were about 30-50% higher priced than nearby resale prices.

Several DBSS review by me

The Peak offers biggest DBSS apartments, 5-room is 120 sqm, while Trivelis 5-room is only 105 sq m of which 17 sq m is balcony and A/C ledge. They specify balcony size: 12 sq m, so by comparison living room should be around 3 x 5 meters and common bedrooms around 3 x 2.5 meters (see floor plan, it’s shocking!).

Belvia offers one type of 5-room with 3 toilets.

Adora Green was advertised having “unique 5-Room layout with 4 bedrooms”, but the 4th bedroom is 2 x 2 meters.

Parkland Residences is a slightly better DBSS, being the single DBSS offering some 4-bedroom units rather than 3 bedroom plus a tiny 2×2 m study, but overall all bedrooms are small. You can see that Type C1 apartment have 20 sqm wasted in balconies.

Lake Vista is a good DBSS in terms of room proportions, bigger bedrooms and small livingroom for 4-Room but they offer 5-Room for the people who love big living room!

Pasir Ris One, last one DBSS has been launched on 27 April 2012. Since launch I realized that it is the worst DBSS. Too expensive for its location at end of MRT line, and designed worse than Trivelis, not only tiny rooms but also in the 5-Room flat, the two common bedrooms are facing to internal courtyard, viewing into neighbor unit, while master bathroom have better view. When the project was completed in 2015, it generated a lot of complaints about small rooms and poor workmanship. Read more in allsingaporestuff.com and themiddleground.sg. The single good news about Pasir Ris One is that it is the LAST DBSS, thanks government we got rid of this shit!

No DBSS developer published floor plan with dimensions at initial launch brochure (DBSS floor plans with measurements can be found in HDB Sale of Balance Flats only if HDB repurchase flats), but you can estimate room dimensions based by door size, each bedroom in BTO is about double in terms of square footage compared with DBSS. 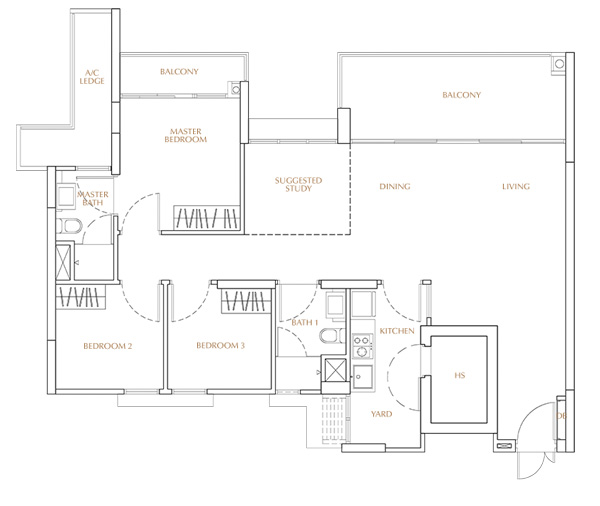 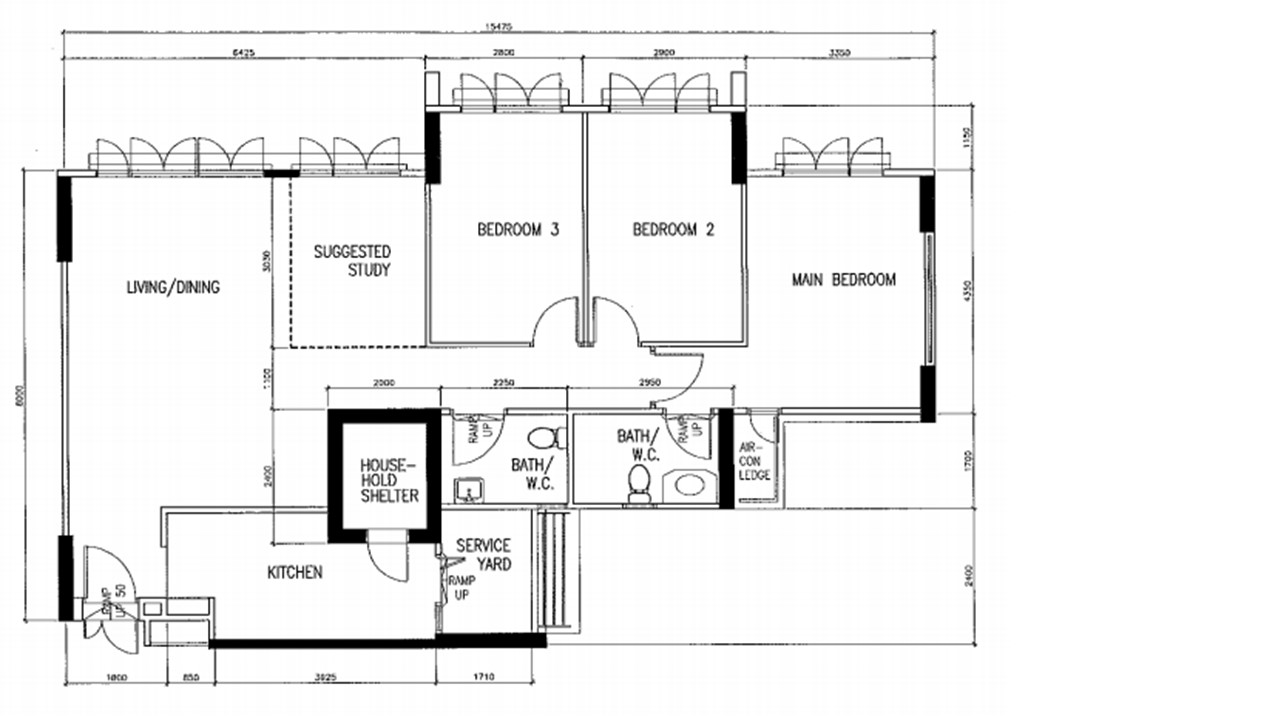 If you need DBSS floor plans, just do a search by DBSS name on Google Images Search. Do not ask me to give you or post more floor plans on my website.Being built by private developers, each DBSS have dozens floor plans variations, and agents selling them add their contact info on images, making hundreds of possible floor plan images with no standard format like in case of floor plans provided by HDB website, so I am not going to overload my website with more images.

Tags:HDBlists
previousHDB interesting facts and records
nextDatabase of all buildings in Singapore with postal codes 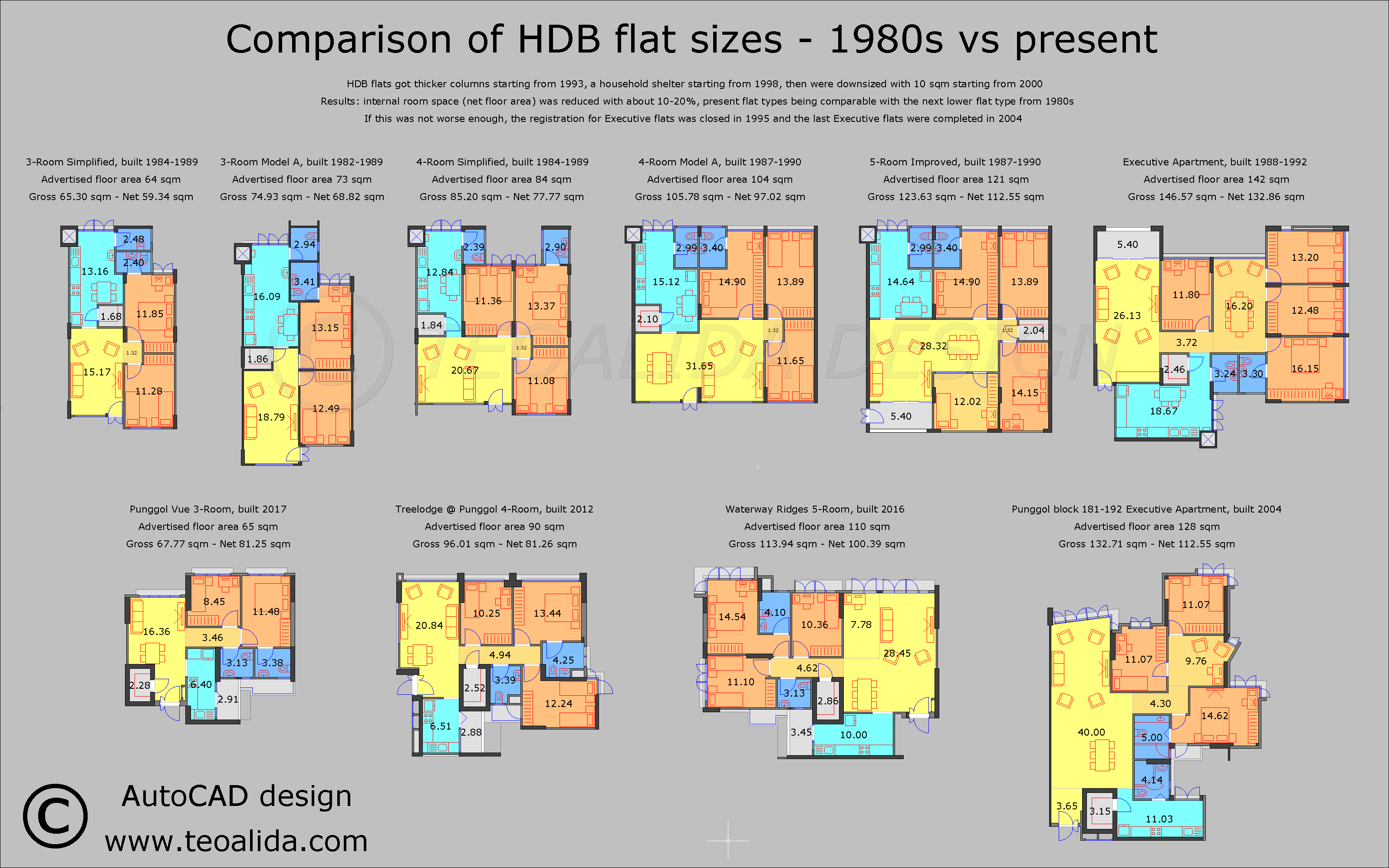