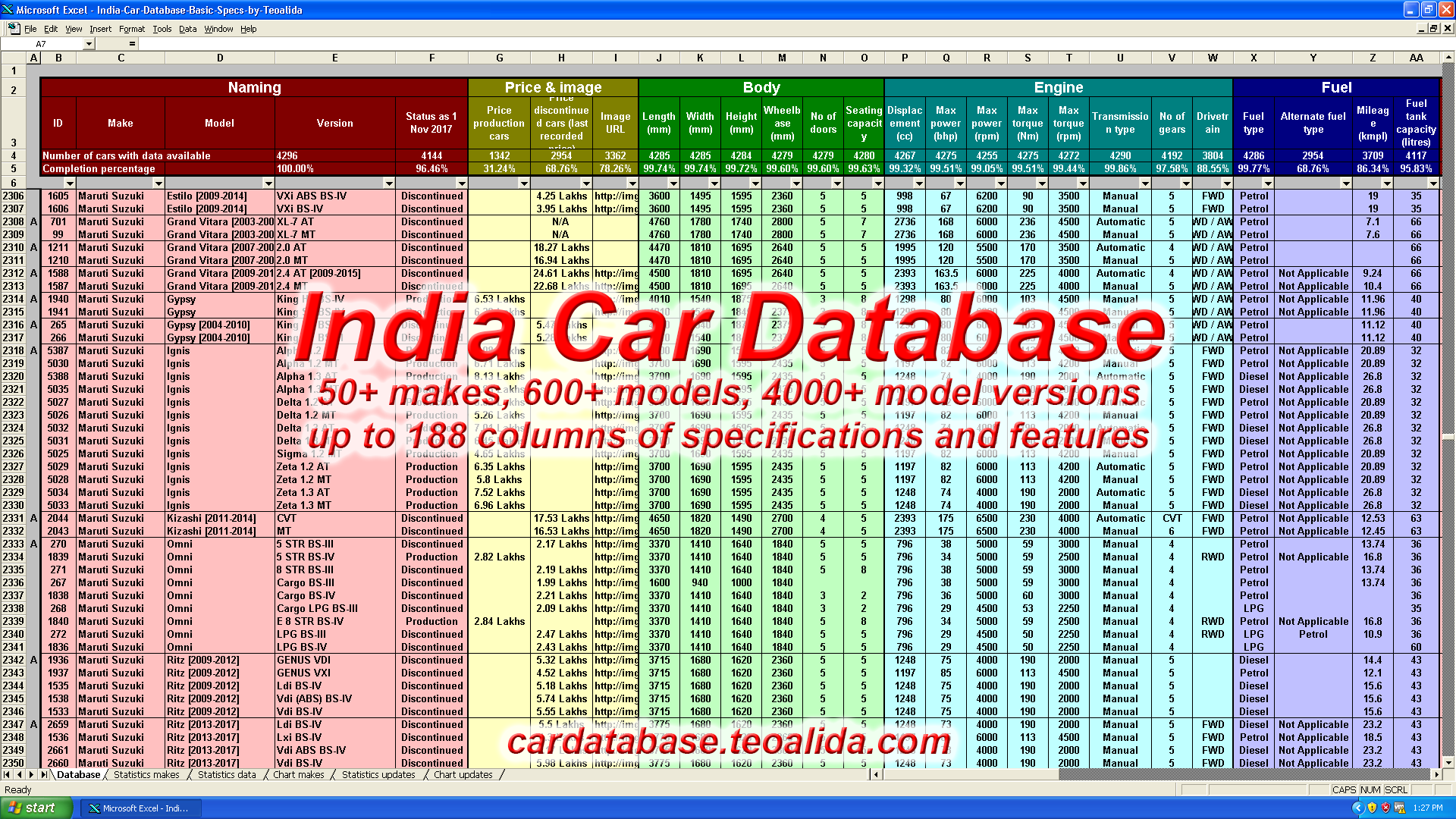 Coverage: oldest car included in database that indicate year is Daewoo from 1994, the FIRST foreign car manufacturer to enter in Indian market, followed by Ford and Opel (1996), Fiat (1997), Honda and Hyundai (1998). It may include pre-1994 models from Indian domestic brands but they do not indicate exact years of productiuon. 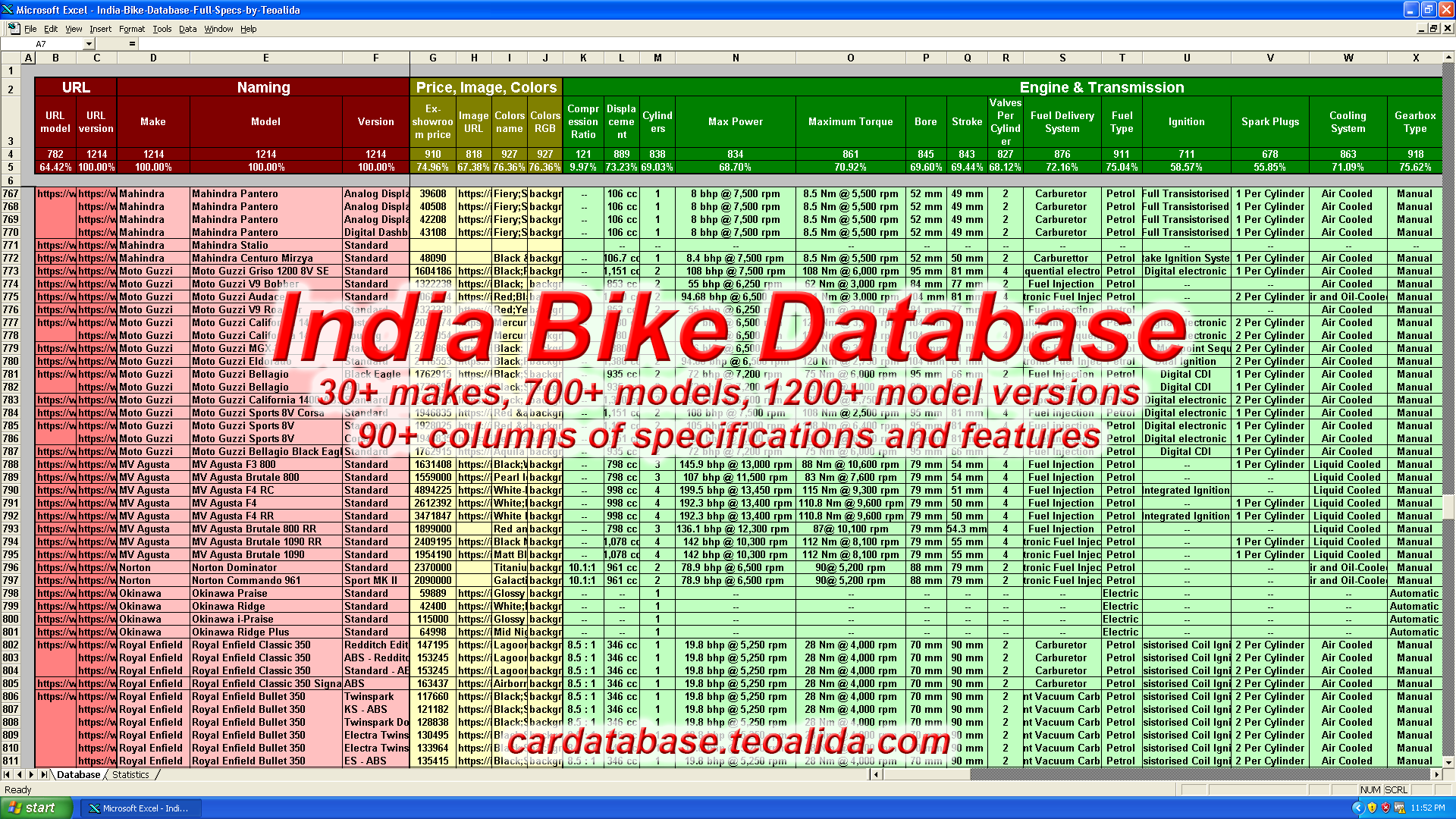 Buy FULL database (all makes) + FREE updates when someone ask an update:

Coverage: since NO bike have production years indicated, I cannot answer which is oldest bike included in database, but I assume that 2000s-present at least.

India Car Database was the first project I done using an automated software to extract data from websites, opposite of European car databases that I am making since 2003 entering data manually from books and magazines.

In August 2015, after finishing a new phase of development of European car databases, I went into web scraping and after a week of learning and experiments, I managed to grab all data from www.carwale.com website, new and old cars. I was not aware that Carwale website been just redesigned between 14-18 August 2015 according www.archive.org.

I made it from my personal interest, because many people from India been asking if I have / can make a database for their country, and I though that there is big potential, but I was WRONG, just a small percentage of indians are willing to pay for data.

One of the people who visited me in August 2015 (and purchased India car database afterwards) wrongly understood that I created India Car Database “just for him” and asked me to make a 2-wheeler database too. I rejected, because my interest was only for cars, but once I mastered my data scraping skills and reduced effort to create a database to <1 day, I decided to offer web scraping as service. In January 2016 a second customer wanted bike specifications, this was the moment I made a scraper for www.bikewale.com too.

After doing 3 updates in 8 months, database been purchased by 7 people and that was enough to offer monthly updates on 1st day of month, since May 2016.

Carwale website underwent few changes: they hide URLs leading to discontinued models in February 2017, then removed unique IDs in November 2017, forcing me to change procedure, instead of updating by re-scraping all cars I has been adding new cars monthly, bearing risk of inconsistency between new and older cars.

Carwale re-added (some of) discontinued models in October 2020. I emailed update notifications to 30+ customers asking if I should continue adding new cars into existing database each month, bearing risk of inconsistencies, OR start a new database containing new and discontinued cars that are shown on Carwale (2000 cars less) with consistent data in each column and without duplicates. I emailed ~30 customers (subscribers) and only 2 replied choosing option 2. Another 2 new customers also choose option 2. So in December 2020 I made a new database format, solving problems of inconsistency. See list of updates.

Note: Car class and Body style are NOT available in new cars only package, because would take a lot of time to re-add them for 1200 cars every monthly update, so I add them only in new+old cars package for the cars added each month (about 20-50 cars per monthly update). Cars launched after June 2019 have some engine columns merged into 1 column due to changes in Carwale website.

Database made at request for someone who wanted production years for every model and engine, and engine codes, and posted here for other people who may be interested in same thing

Somewhere in late 2019 or early 2020 CarDekho changed coding again making scraping specifications by version feasible again. I updated them again in May 2020. Due to low sale volumes, I will do updates on request basis rather than monthly like in case of India Car Database.

In 2016 someone asked me to scrap dealer information from Carwale and in 2018 someone wanted the same from Bikewale. Here are the databases containing dealer name, street address, email and phone number. Sales been LOW (in whole year 2019 not even a single person purchased dealers database) so I won’t update them unless someone else purchase and ask for update. 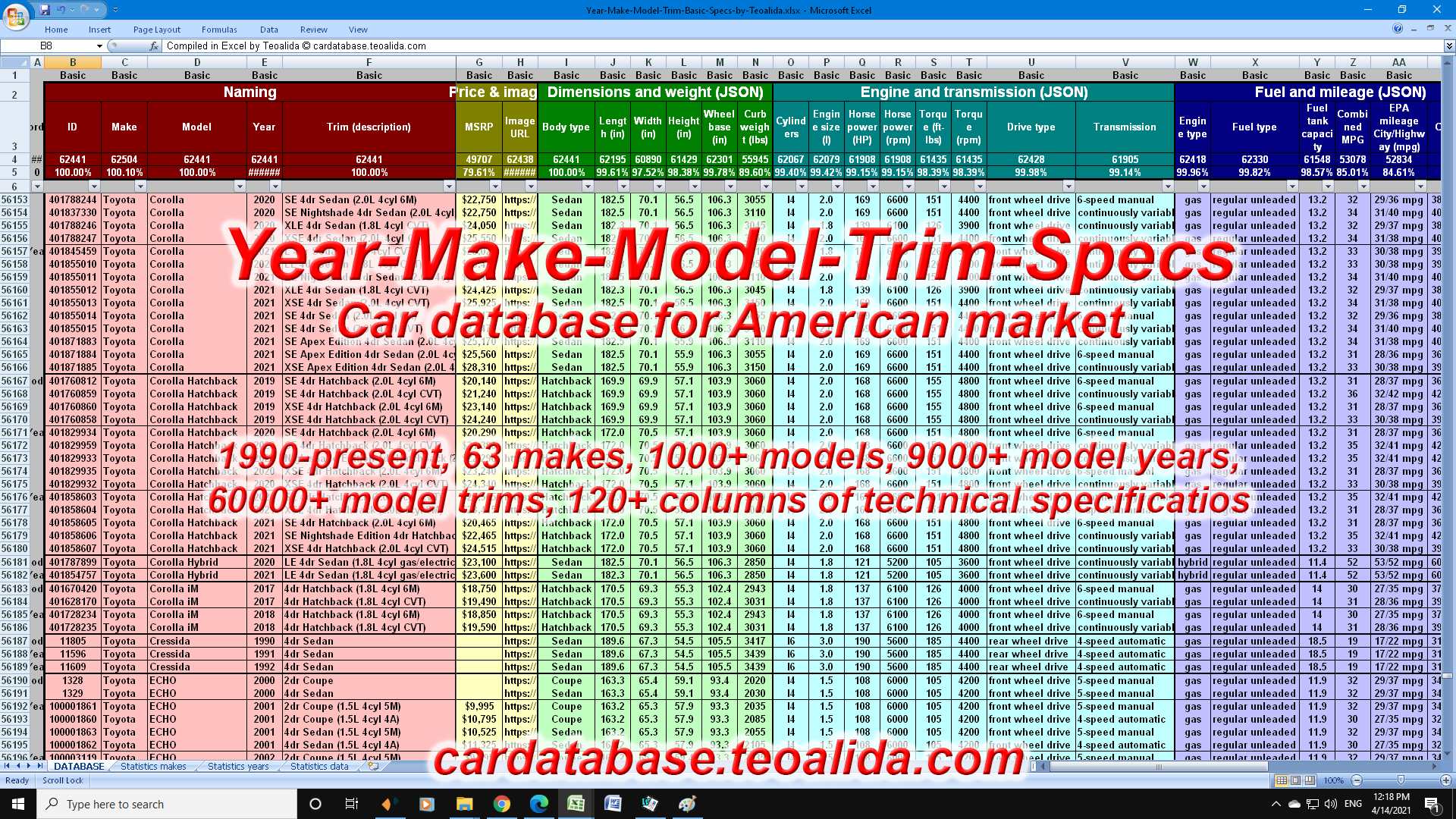 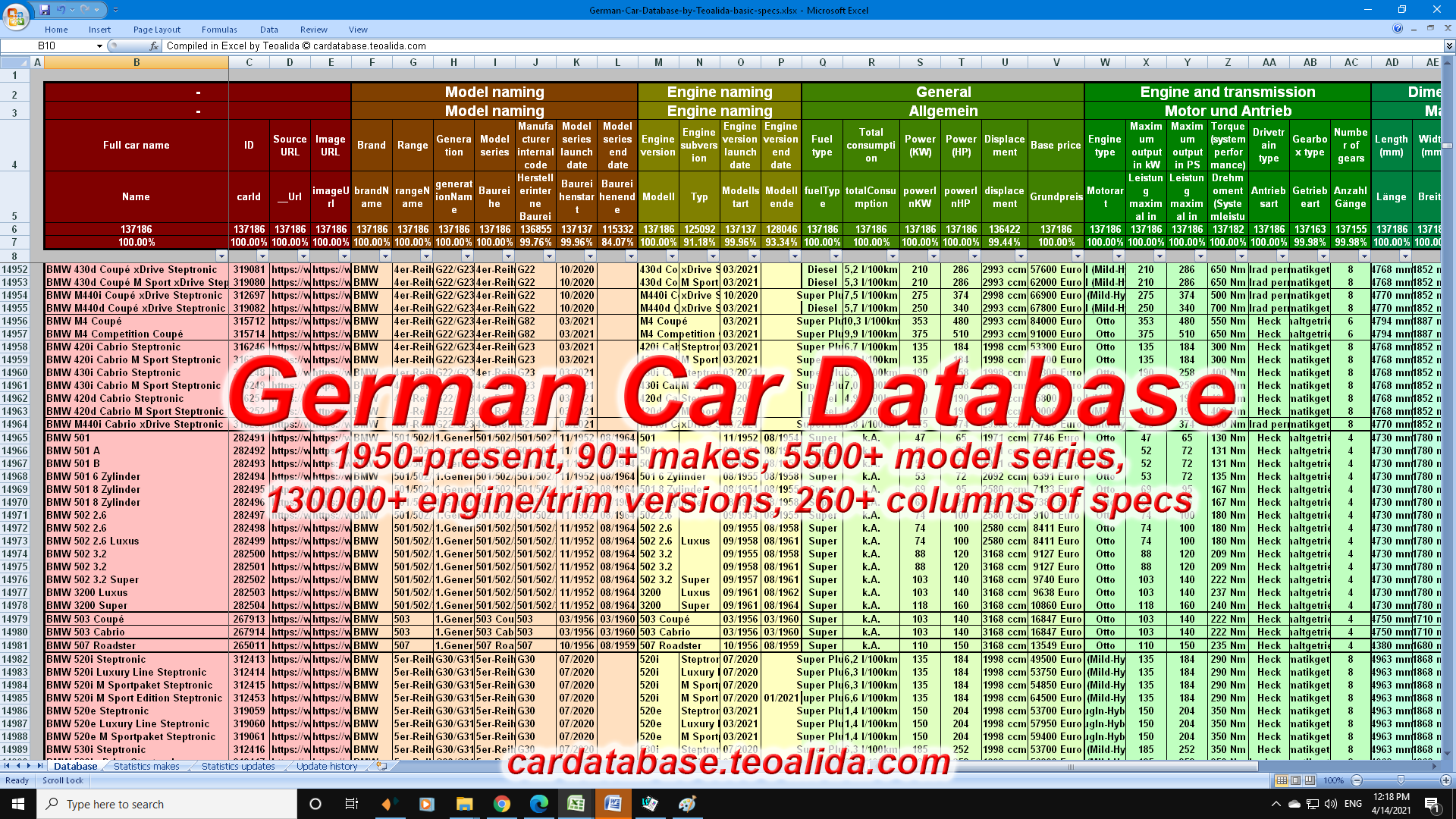 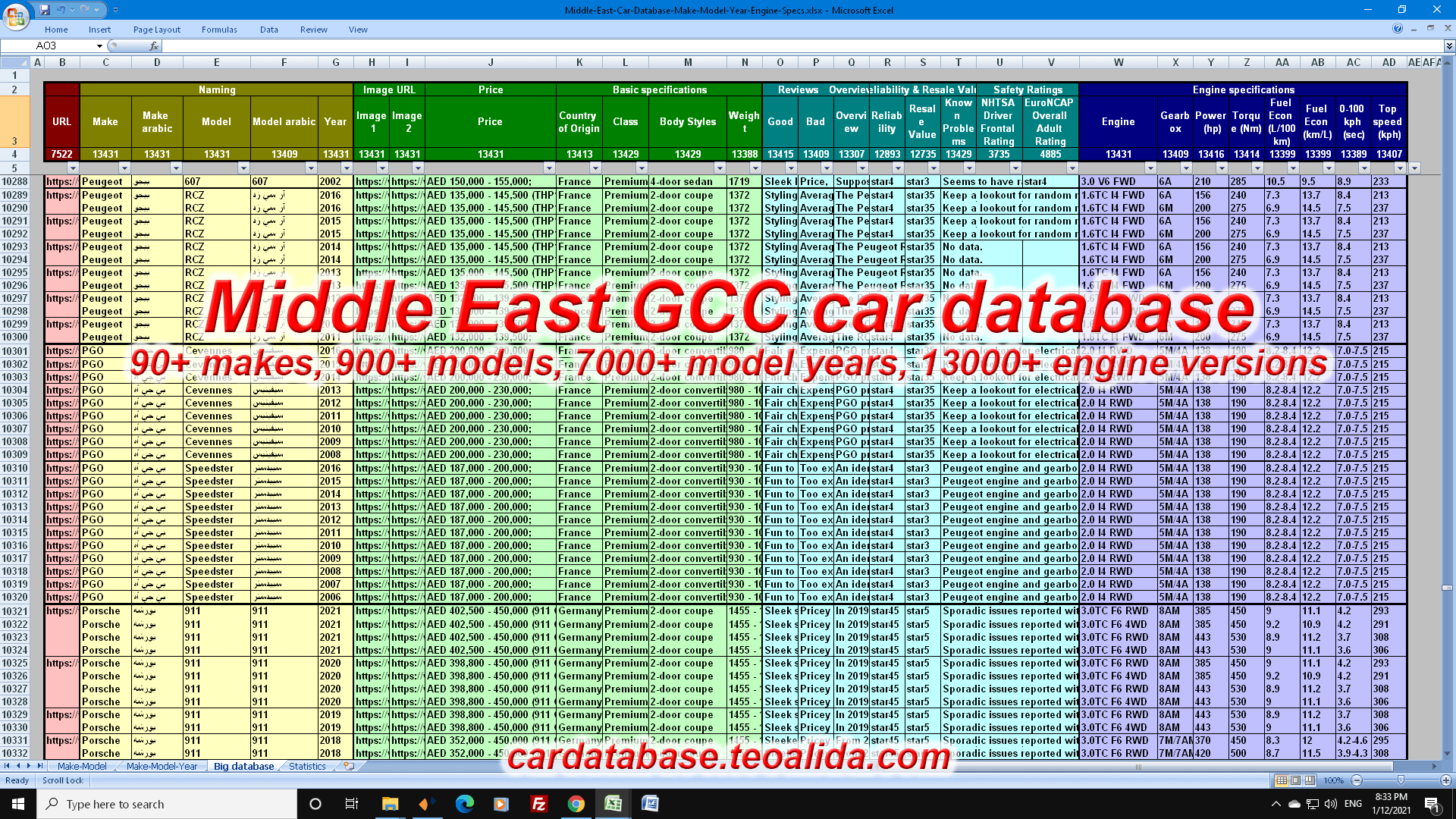 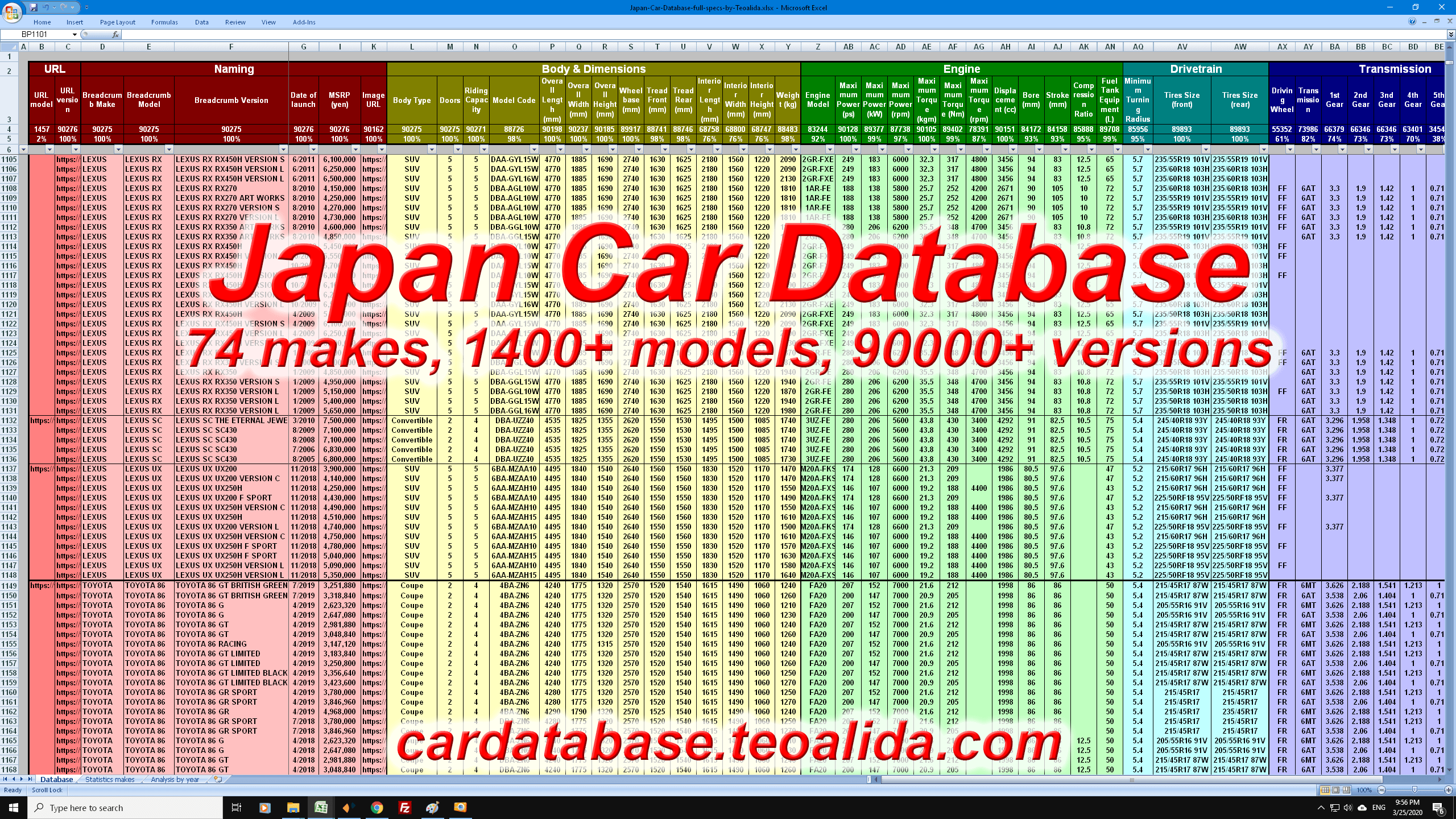 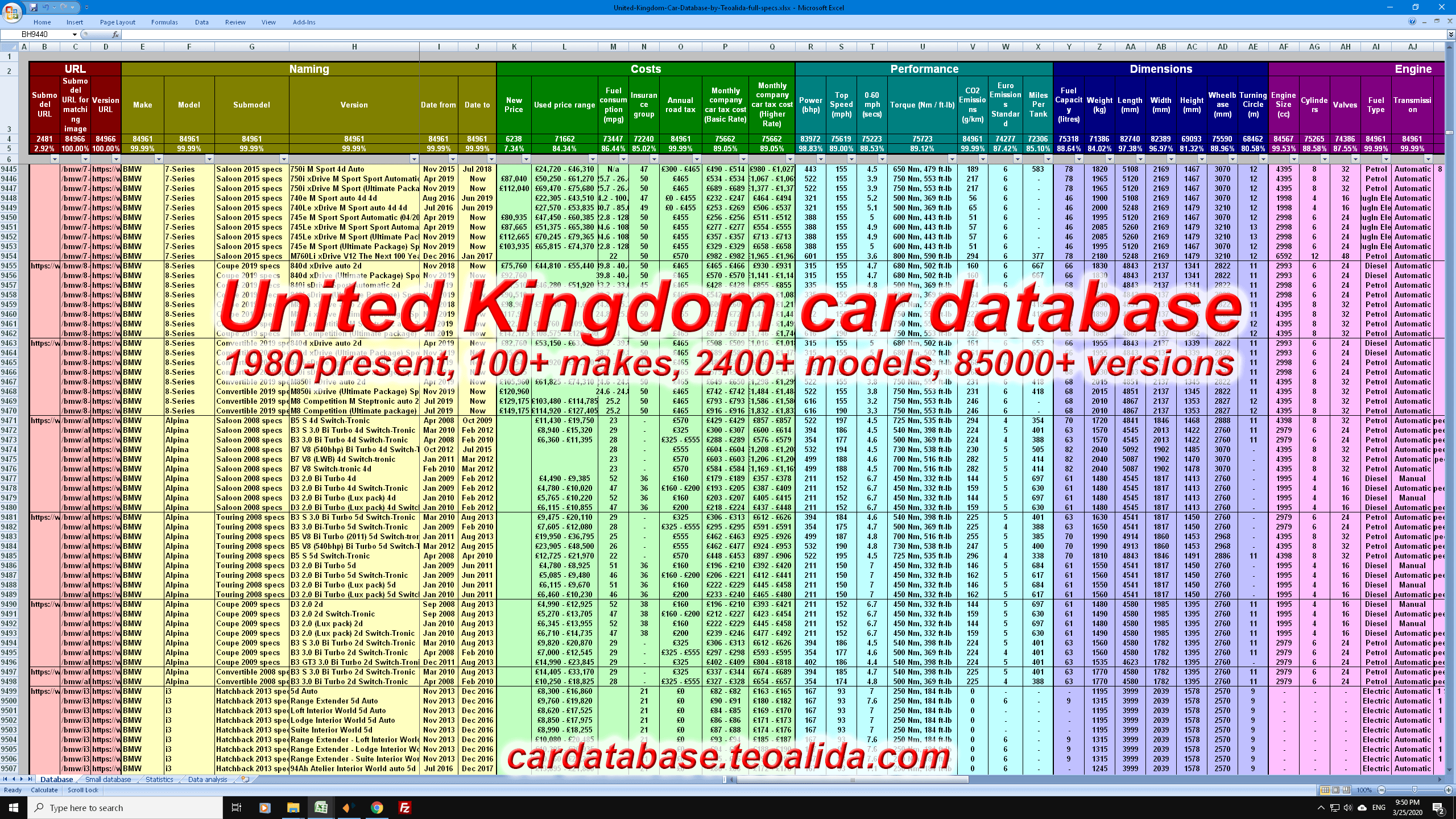 I need help at webdesign!

A message to all people who complain that my website looks like 1990s: I showed few themes to some of you, and you told me to buy them because look modern, I bought Neve theme on 1 May 2021, now some of you say again that website looks same 1990s shit.

I had dark blue header and titles, you complained “too many colors”, I changed to shades of gray, you complained again “too bland”. So what colors do YOU want? Read full story and advise me best way to redesign website!

I redesigned car database section on 10 May 2021, compare with old design, excuse few bugs (I reported to theme developer), I hope in few days my website will be PERFECT.

Trouble choosing the right database? Have a suggestion for a database? Found errors that need correction? Contact me anonymously via LiveChat or email [email protected]

Watch videos to see database completion, test database free SAMPLE in your application, then pay with PayPal or Credit Card. The download link for FULL database is emailed automatically to you (example email) regardless site owner is online or not.

Download link is valid 1 year and you will be notified with similar email every time an update is available. After 1 year you can re-buy at 50% discount to download updates for another year, read more.

Before 2015 I thought that web scraping means cheating and illegal way to get data, but over years I realized that is not as dangerous, most customers do not care about how the data was obtained and some ask me specifically to extract data from competitor websites and sell them in Excel format.