Registration number database… is this possible?

I switched to PollDaddy because it have “other” (people can type their own answer) or limit the number of choices, thus giving me a better image what people are looking for. Unfortunately PollDaddy free accounts have fixed poll designs, making poll wider would automatically enlarge text to a disturbing too big size. Switched to Poll-Maker.com since September 2014. 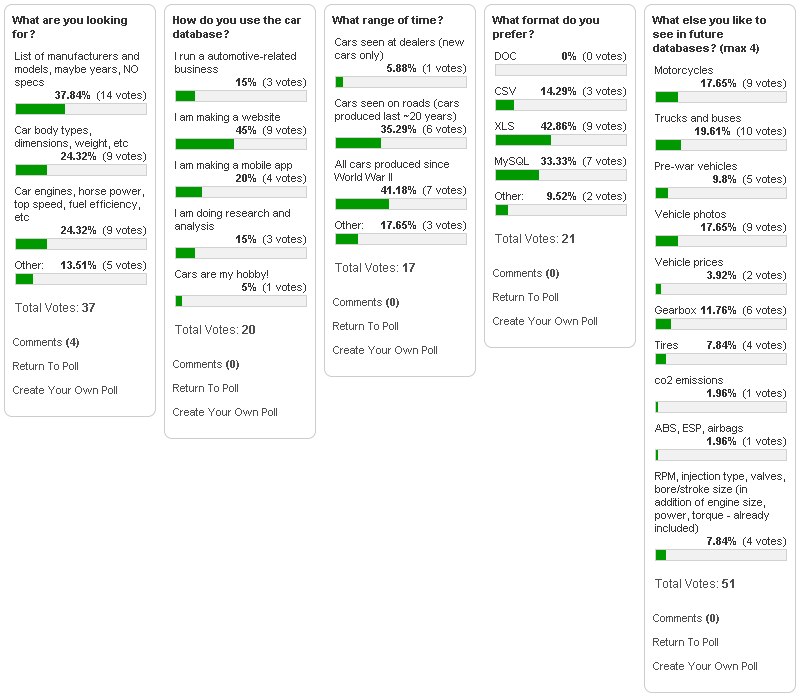 Trouble choosing the right database? Have a suggestion for a database? Found errors that need correction? Contact me! Do not waste money on other (cheap) data providers that do not provide support for their customers, selling incomplete data and never correcting errors.

I research automotive industry for over 15 years and compile data in Excel from books and websites. XLS is a versatile format easy to consult, read, sort, etc, also converted to CSV and SQL and used as database for mobile apps and websites.

Can’t find what are you looking for? Don’t go away… just tell your requirements. Don’t care if I have of not… what I don’t HAVE I can MAKE as custom project for you and for future customers (depending by available time and number of people requesting same thing).

Do you need only new cars? Buy Year-Make-Model 2017-2020 for only 12 euro. Changed mind and need 1945-2020 at full specifications? Pay only the difference. Partial purchases (selected makes) can be arranged!

Download link is valid for 1 year, and each time I update databases I send email notifications to re-download. After first year, you can buy another year of updates at 50% discount. Read more.

I started European database in 2003 independently from internet world, sourcing data from books and typing in Excel (see video), creating an original product that you won't find anywhere on internet (except websites that purchased from me), so you can use my database on your website without worrying about copyright claim by someone else.

Since 2015 I offer web scraping services. If initially I though that web scraping means cheating and illegal way to get data, over years I realized that is not as dangerous. Most customers do not care about how the data was obtained and some ask me specifically to extract data from various websites and sell them database.