Who know more photos such as the following ones, showing contrasts between old vs new cars, small vs big cars, please give me link or email me the photo. I love collecting! 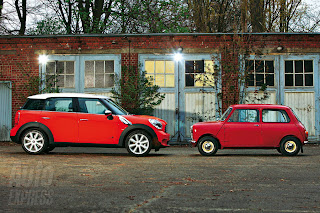 Car classification in Europe is not officially regulated, instead, it is defined in relative size with other cars.

Today the average lifetime of a car model is 6 years for compact and medium cars and 8 years for mini and luxury cars. Is normal for cars to grow over years, as technology advance and more gadgets should be included under body, but in Europe since 1990s, the cars are growing crazy with about 10-20 cm per model change, which is exaggerate, based on technology evolution, 5 mm per year is enough. This non-natural grow causes companies to abandon large models and introduce new smaller models below existing models.

Some brands do not follow the common class sizes, making cars with intermediate sizes, these are usually considered being part of the smaller class, causing further increase in size of car classes.

Seems that all European companies wants to make a car bigger than competitor’s cars of same class. This leads to 2 cm / year increase in average car length in each class. The cars get fatter also in width, this is an issue for parking design, since in most countries the parking lots are 2.5 m width, most compact cars were under 1.7 m width in 1998 but since 2008 most are over 1.8 m. 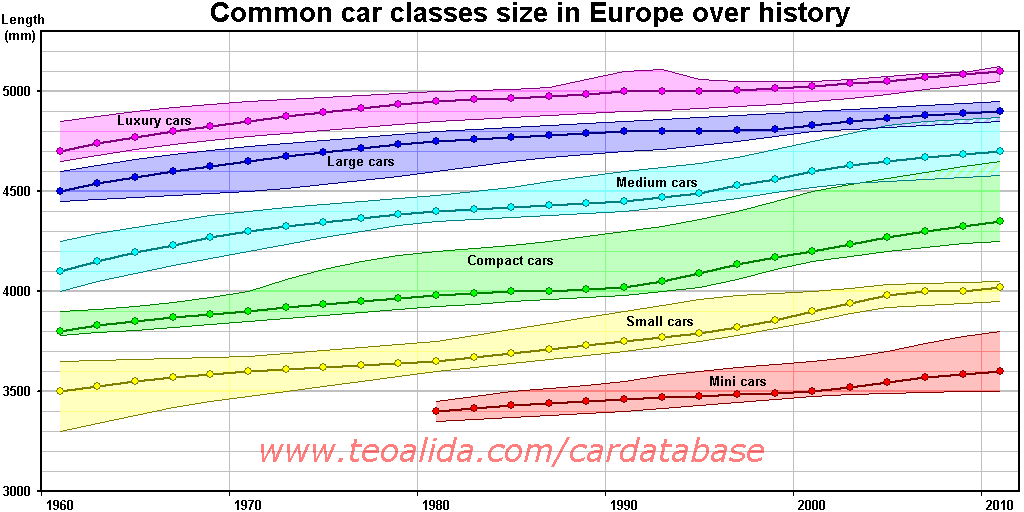 During 1950s and 1960s, engine size played a bigger role in classifying cars than car dimensions. Citroën 2CV belong to economy class while Fiat 850 was a superior class despite of smaller size.

During 1990s and 2000s the cars entered in a rapid growth. Many manufacturers abandoned the executive segment: Ford Scorpio (ended 1998), Rover 800 (ended 1999), Opel Omega (ended 2003), Peugeot 607 (ended 2010), Citroën C6 (ended 2012) and replaced their medium / large family models with a new model that its dimensions are nearer former large class / executive cars rather than medium class / large family cars, further aggravating the growth. No wonder that these cars had poorer sales than their predecessors, since most buyers choose cars based on car size, engine size, price, not based on model name or designated class.

Off-road cars are produced since pre-WW2 times but they were not popular except for army use, as most them featuring open body and wooden seats.
The first SUV (vehicle with off-road abilities and comfort of a car) was Range Rover (1970) and it remained the only SUV in Europe for 2 decades. Was followed by Land Rover Discovery (1989), Opel Frontera (1991) and Ford Maverick (1993). Early SUV were offered in 2 wheelbase, with 3 and 5 doors.

Obviously the compact-class Ford Focus and Opel Astra were replaced with bigger models to fit the gap to growing medium-class brothers.

Opel is the best example of car growing

Opel had a constant lineup of 4 car models during last 40 years, BUT… take a look in this table:

Once known for low-cost cars like Kadett and Ascona, the last Astra and Insignia models are LARGEST models in their class. Same for Meriva and Antara. Surprisingly, 2014 Opel Corsa E gained just 30 mm while 2015 Opel Astra K is even smaller than predecessor. 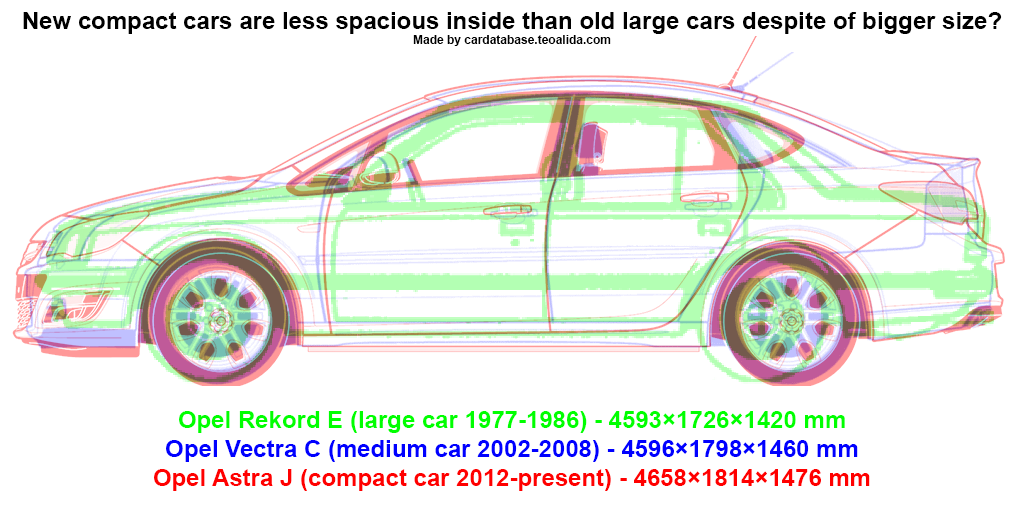 Japanese car evolution is more stable, they do not increase cars so crazy, also they do not install bigger engines than necessary.

Solution: Europe should urgently implement a tax system similar with Japanese one, taxes depending not only by engine size but also by car size. This would make manufacturers to stick under some size limits… 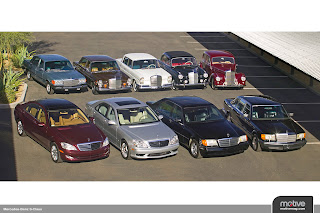 With other words, in 1960s most cars were the “medium” ones, being 4 meter in length, in 1990s “compact” cars became common, being again 4 meters in length, in 2010s “small” cars enjoy growing popularity, having the same length of 4 meters.

Also, what the fuck are the crazy supersport engines on regular cars? Example: 2008 Audi RS6 with 580 horsepower. Most today cars, even in their base model, can reach max speed over 200 kmph, while most today highways have speed limit up to 130 kmph. Also who needs to reach 100 kmph in under 5 seconds?

American cars were even bigger until 1973 oil crisis. If in Europe everything was growing, the American cars had successive downsizing starting from 1977 to 1990s. First, some basic notions of physics:

Horsepower is never measured, instead the torque is measured at various rpm then horsepower is calculated from torque.

Torque value in Nm x rpm / 7024 = power value in PS. Do note that numerical values of max power and max torque given in car manuals are not directly related because at the rpm of max power, torque is lower than its max value.

Top speed is proportional to square root of engine power, and also depends by area of car viewed from front.

Acceleration is related with engine power but also with mass. A loaded car will have same top speed like an empty car, but require longer distance to accelerate and reach top speed.

A car with two engines, gasoline and diesel, having same max power but the diesel one have more torque, is likely to have same top speed but the diesel one will accelerate slower because diesel engines are often heavier. Actual performance figures depend also by gearbox.

Catalytic converters, appeared for first time in 1973, for cars produced or imported in USA, because in 1974 US EPA imposed limits of exhaust emissions. European car manufacturers introduced catalytic converters in 1985. Cars without catalytic converters were produced until 1988 in Germany and 1990 in rest of Western Europe. Japan don’t know when introduced but in 1985 they already had catalytic converters for most domestic cars. They are meant to reduce pollution, but they also reduce engine torque and power and increase fuel consumption, this also introduced fuel injections for mainstream cars, which counter-balance the loss of power, however the sport cars which were already fuel injected have lost about 10% of power.

In the above article we discussed primarily growing of car length, but they grow also in width and height, making frontal area larger thus require more powerful engines to maintain the speed.

Other manufacturers choose to use a turbocompressor for top-range model instead of bigger engine. Interestingly Mercedes in 2004 replaced C 32 AMG (3.2 litres turbo, 354 PS) with C 55 AMG (5.5 litres non-turbo, 367 PS). What was the reason?

Direct injection in gasoline engines was introduced by Mitsubishi in 1999 for multiple models, followed by Volkswagen in 2002, however it did not became common until 2010s, when together with turbochargers, helped achieving power over 100 PS per litre, allowing even 4.8-meter long cars like Ford Mondeo to be powered by tiny 1.0 litres engines. V6 engines disappeared from compact cars and even from medium cars except for premium brands like Audi, BMW, Mercedes. Saab and Volvo were the first manufacturers to stop producing naturally-aspired engines. Even the highly popular Porsche 911 Carrera will go turbo in 2016!