Multiple people have asked me if I heard of Bitcoin, if I am so IT person why I am not investing into cryptocurrency, or asked how much I earned once I told them that am I already investing, or asked if I do trading after they noticed in Checkout page that I accept crypto payments.

After discussing privately with few people, I am writing this page to explain to everyone my journal of crypto trading. Page published May 2018.

Most money sits in exchanges, and most exchanges use Bitcoin as primary currency, people buy altcoins with Bitcoin and sell altcoins to get back Bitcoin. When a coin is listed in an exchange or integrated in some product, people rush to buy it and its value rise. When something negative appears in the news, Bitcoin fall as people sell it to flat money, altcoins fall even more because people panic and sell altcoins back to Bitcoin.

Crypto exchanges allow futures contracts, you can place buying or selling orders at desired price and they are delivered when price is meet regardless you are signed off.

Trading cryptocurrencies is like playing at casino, for someone to win, someone else need to lose, but while casinos are based only on luck and infinite playing give them a house edge of 1-5%, the cryptocurrency market is rising over time so a skilled trader is more likely to win than to lose.

Biggest profits are made by people lucky enough to spot cryptocurrencies with low marketshare that have potential of growing in the future and stay away from those with no future development planned. Do not invest more that you can afford to lose!

YouTubers with large number of subscribers have ability to influence coin values, they invest sums of 5 digits USD in a small coin, then make a video about it, making more people to invest and helping him to get profit. If you see a coin rising sharply, check Reddit if there is any news that explain rising, if there is no news, it is most likely a Pump & Dump caused by private groups of people who buy a unpopular coin simultaneously and quickly sell, causing its value to double and drop back to original value in a matter of hours.

My story in cryptocurrency trading

I heard first time about Bitcoin in 2013, but did not paid attention to it, in November 2013 while playing a game, other players asked me in-game chat if I know what is Bitcoin, I said that is an online payment system similar with PayPal, we argued a bit because he claimed that 1 Bitcoin does have a value and 1 PayPal does not. 2 days later I saw on TV news programme how Bitcoin was invented and rose in value to over 1000 USD. This was the first time I realized that Bitcoin is not just an online payment system but an alternative currency. By the time I wanted to know more about it, it collapsed sharply. So I never wanted to hear again about this shit.

In June 2017, Alex, an online friend that I knew for 9 years, IT businessman, bring me the subject of cryptocurrency, for the first time I realized that there is not just Bitcoin, but several hundreds coins that can be traded, he said that have mined several coins and starting from May 2017 he is exchanging coins. Initially I was afraid of this, reminding 2013 Bitcoin crash that dropped value to nearly $200 in 2015, but in August 2017 I decided to join the crypto trading world.

I made an account in Bittrex.com and ordered some Bitcoins via Litebit.eu where I transferred some flat money from bank and put as receiver address the Bittrex.com wallet, then on Bittrex I traded Bitcoin with other coins.

That times 1 Bitcoin valued around $4000 and dominance was 48%, Initially I put $100, but in September I bought $2000 worth of Bitcoin. I spread all money into several Altcoins which I traded badly, leaving me with only $1500, during October the Bitcoin rose in dominance to over 60% so if I kept money in Bitcoin without trading I would had at least $3000.

In November 2017 I had biggest profit when I bought Bitcoin Cash in stages at around 0.10-0.12 BTC when I saw it rising. Next morning I was shocked to see that Bitcoin Cash reached 0.40+ BTC thanks to Koreans trading on Bithumb and suddenly collapsed to 0.20 BTC because Bithumb website overloaded and crashed. Many people said that Bitcoin Cash will rise again and will become dominant over original Bitcoin so I did not sold it, I keep holding, and although it had another rise to 0.30 BTC, it continued to fall slowly and sold it too late.

In December 2017 I made a lot of profits when total crypto marketshare doubled pushed heavily by South Koreans and Bitcoin dominance dropped to 33%, I put money in about 30 altcoins which some of them surged 10x in value compared with Bitcoin. The coins did not rose simultaneously, so the lucky guys who had Dash and sold it after rise and immediately buying Cardano and Ripple, could have made over 50x profits. Personally I bought Ripple and Cardano and sold them after initial surge without being aware that they will continue to surge again. I made most profit with Verge which was sleeping at 50-60 satoshi in early December, when I saw it rising on 16 December I bought $300 at 175 satoshi and by 24 December it reached peak 1900 satoshi, I sold half at 780 on 21th and half at 1330 satoshi on 25th, having profit 7x in one week, regretting for not buying more Verge. But not all coins I invested in rose in value, the profit made from Cardano, Ripple, Verge hardly coped the loss from other coins. 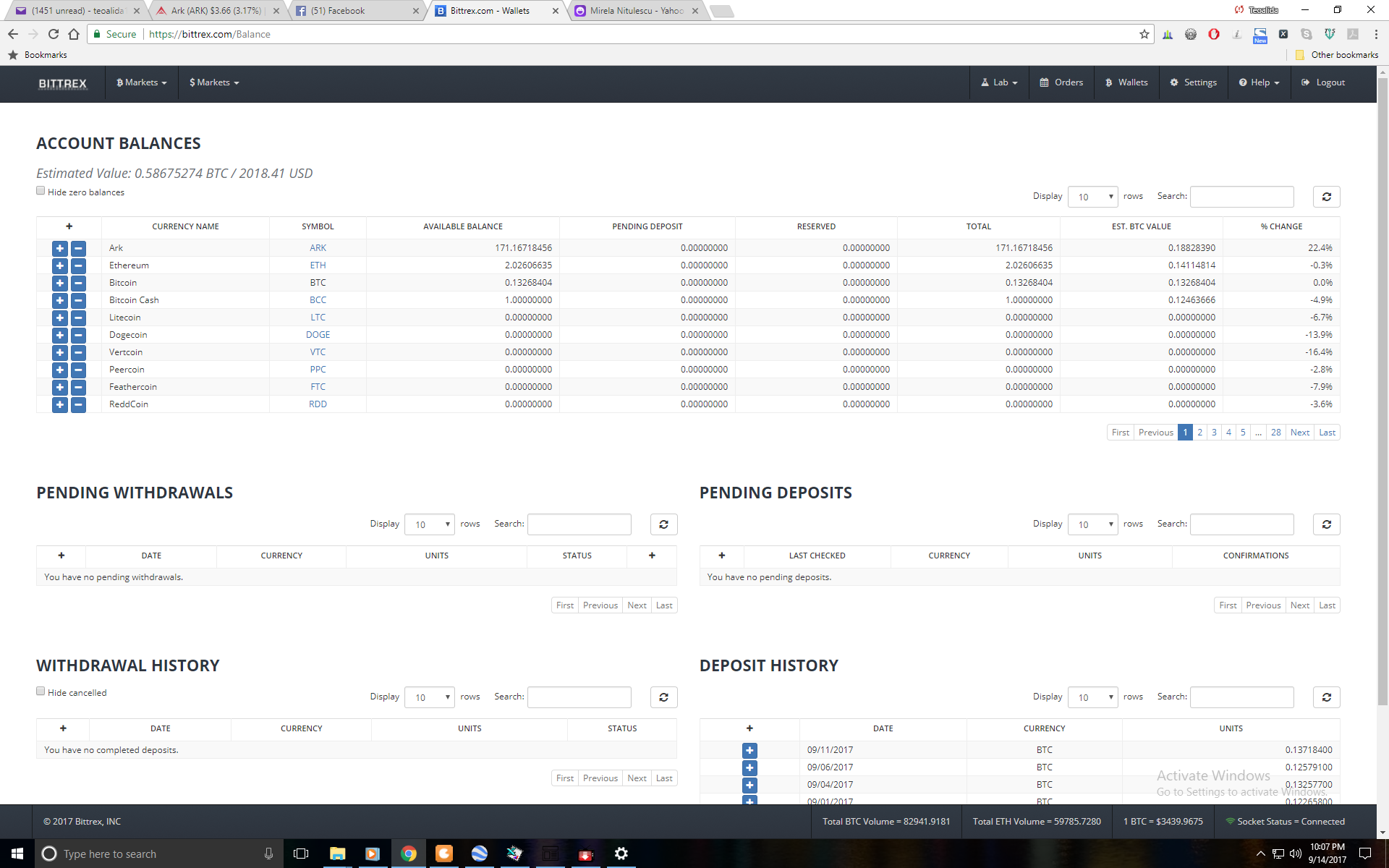 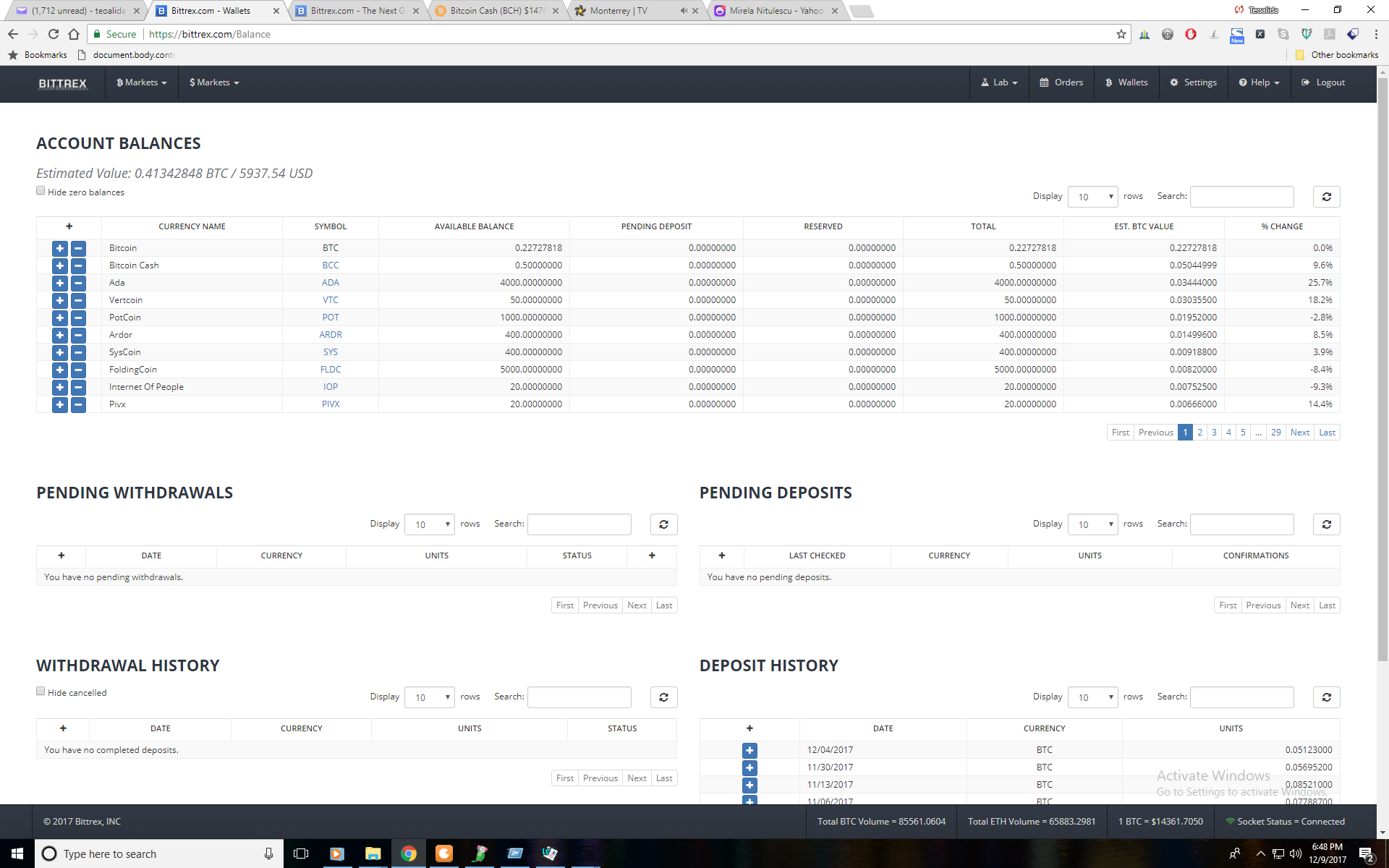 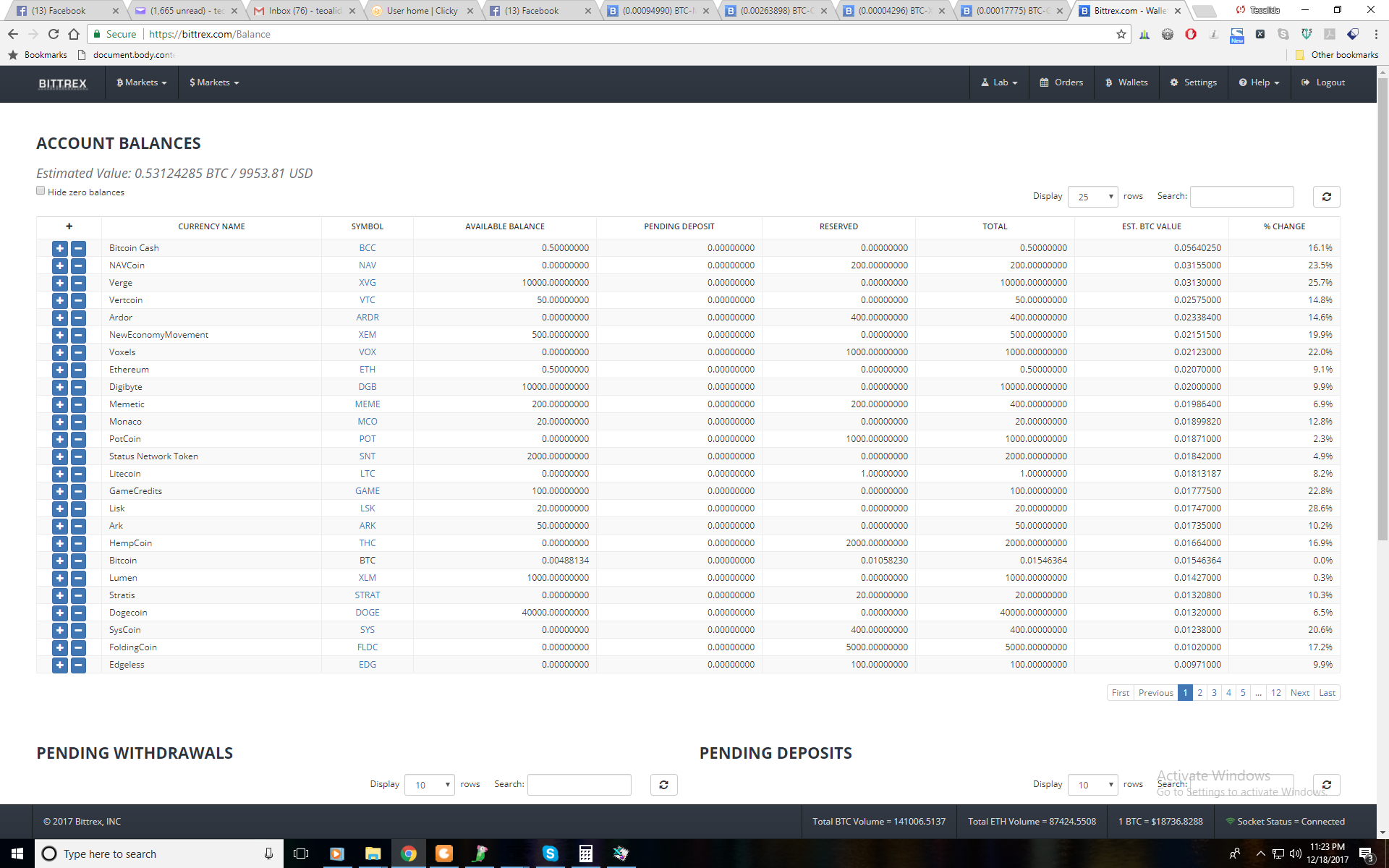 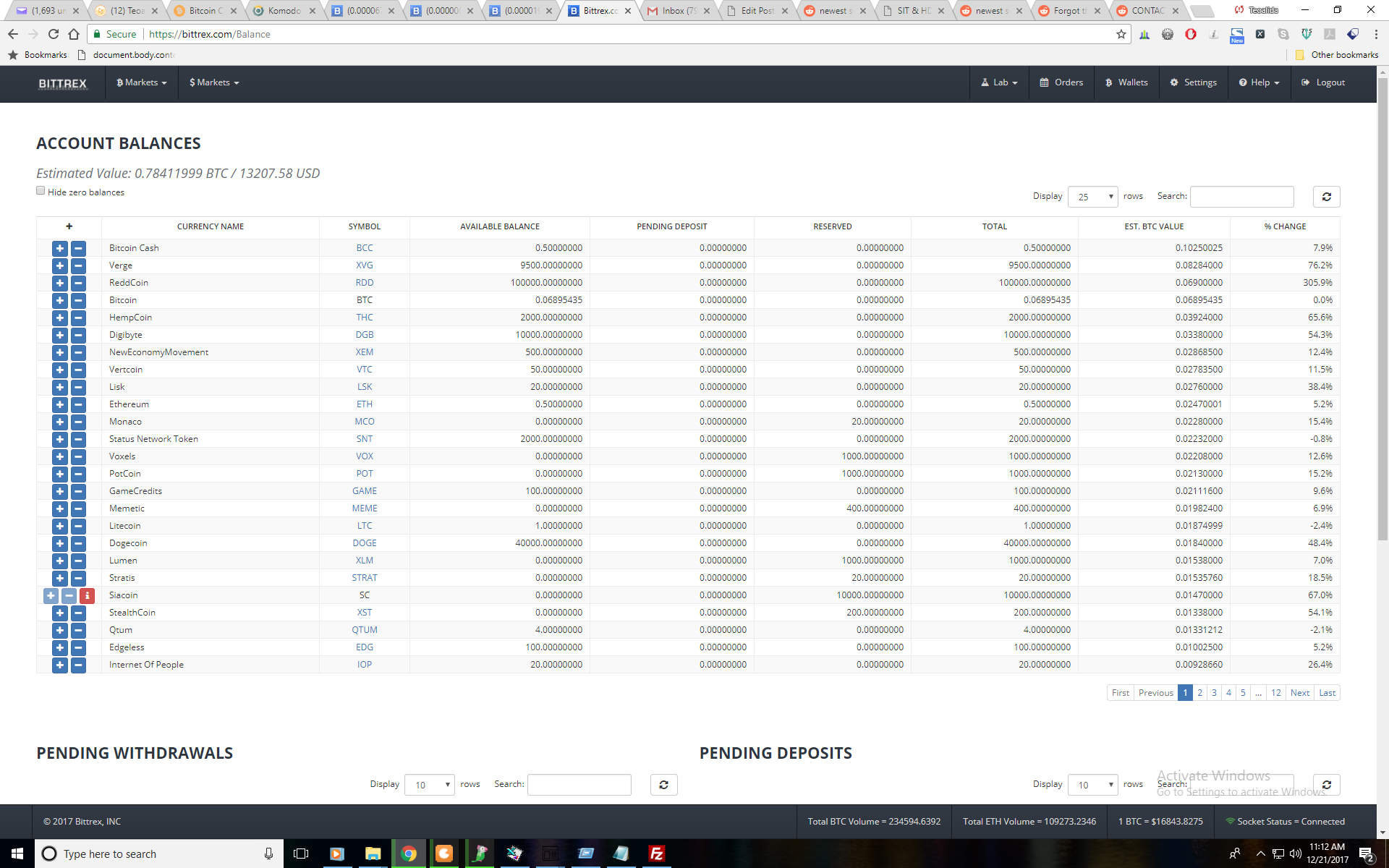 On 5th January 2018 total market cap reached over 800 billions and my coins valued $20.000 / 1.2 BTC (from initial investment of about $5000). That day some rumors that South Korea may ban cryptocurrencies, causing a major fall of altcoins, few days later when government confirmed that will not ban them, market started to recover so I spread my Bitcoins into several altcoins that were inflated by South Koreans and deflated by ban rumors, but this was followed by additional rumours of banning and regulations from multiple countries as well as Facebook and Google who banned ICO ads, causing marketshare to drop to 250 billions as March 2018. My money dropped from $20.000 / 1.2 BTC to $5.000 / 0.6 BTC. 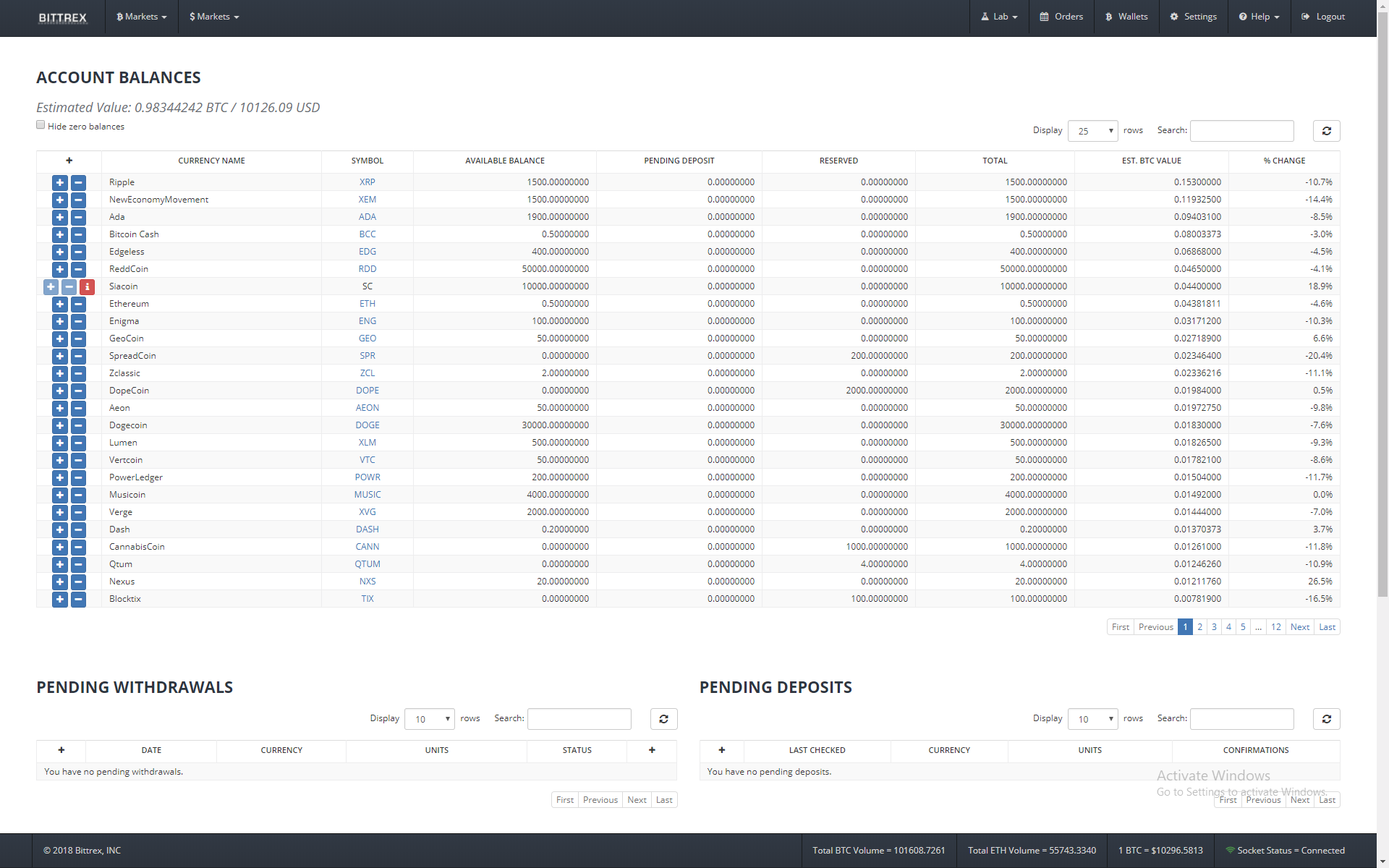 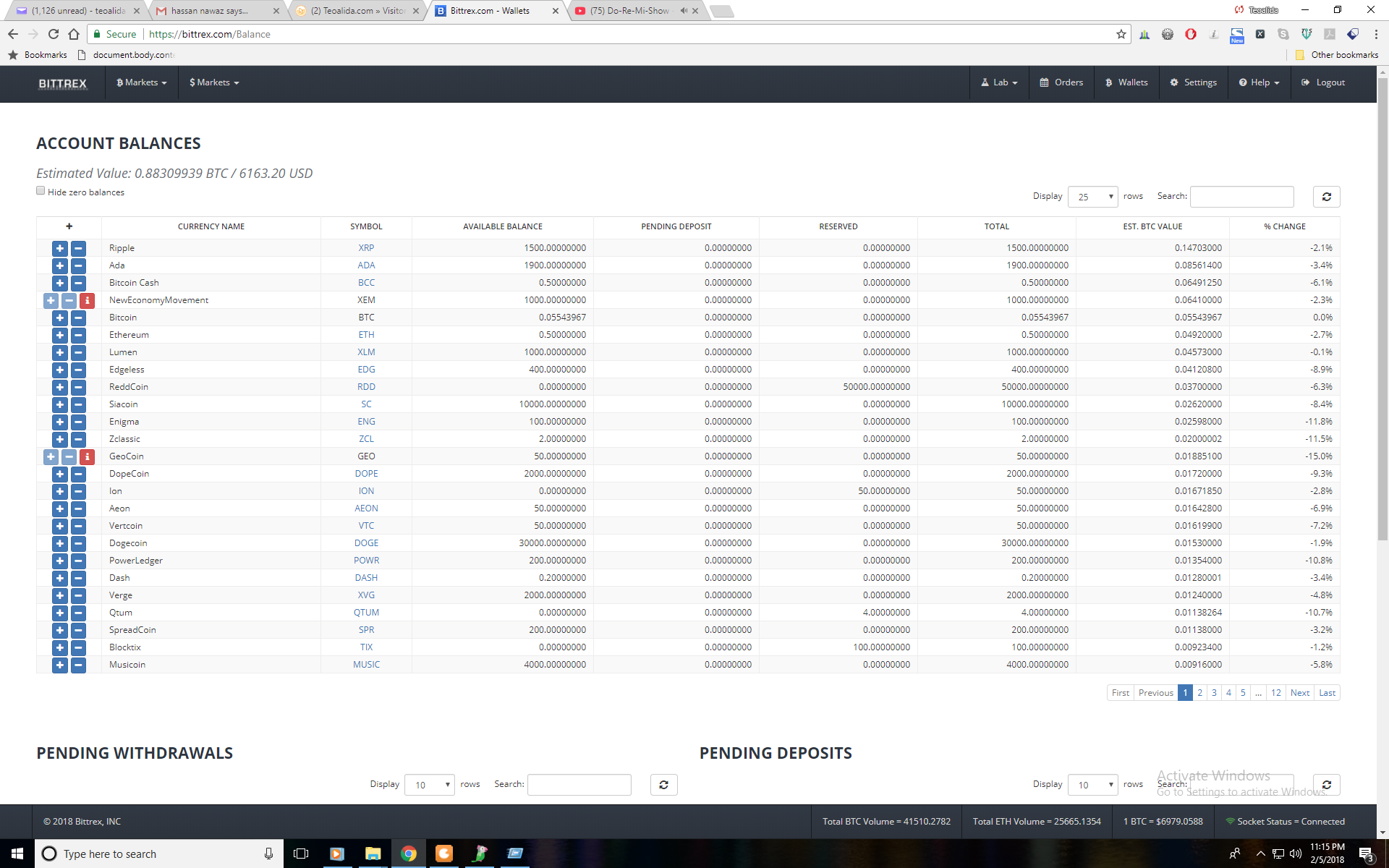 Lucky guys those who sold coins at January peak for Tether (USDT) which is a cryptocurrency paired to US dollar rather than volatile by market demands, and bought back coins after they felt in value.

At the time of writing this article, marketshare was rising since April 2018 and altcoins surge in comparison with Bitcoin so I tried to invest again, but ascending trend was short, since May 2018 they started to fall again and continued to fall until December 2018 when Bitcoin dropped under $3500. There was one coin that had constant rising: Binance Coin, a coin created by Binance.com trading platform as a mean of exchange between other coins, and rising number of users of their platform made this coin value to rise, sadly I was not one of them!

Another rising started in April 2019, ending in 26 June 2019 when Bitcoin reached $13000+ and dominance rising from 50% to 70%, after which another slow fall started. Whenever worth investing in cryptocurrencies in the future I don’t know!

In January 2018 a visitor of website informed me that he is buying same coin multiple times to sell at peaks and re-buy in the dips. I tried to do the same, I bought Musicoin at 520, sold at 700, bought at 600, sold half at 800 and keep other half thinking that will rise even more but it felt down to 200 so I ended losing more than I won. In other cases I sold at all-time high thinking that will follow a dip, but actually it rose even more so I failed to fully profit from it.

Note: screenshots were made at the time I and Alex were online at same time, for purpose to show him, I did not took screenshots for purpose on publishing on my website (because I had no intention to write this article until May 2018), otherwise I would have been more careful to take screenshots on regular basis and without visible tabs.