Are you building a house in Philippines? See sample house plans and contact me to design new house for you!

The Philippines is a beautiful country until we talk about living conditions and government. One of the poorest countries in the world, ruled by one of the most corrupted governments in the world. Corruption and geography isolation keep foreign investment away, good paying jobs are hard to be found, so about 10% of country population is working overseas, and build beautiful houses when they return home.

Philippines have one of the highest income inequality of the world. They built an impressive business district in Makati City (above photo) and Fort Bonifacio Global City in Taguig, while half of population lives in poverty (less than $1.25 per day).

Additionally, at least 12 millions filipinos are working overseas, according Wikipedia.

If in the past USA was preferred work destination, since 2000s most overseas workers went to Middle East, but you can find filipinos on every continent. I can tell this from my personal experience of architectural designer. I have been contacted by people from all over the world telling me that build houses in Philippines, and this even before writing this article. Actually half of my customers in Philippines contacted me from an IP located in another country.

I believe that the booming economy, lack of public housing programmes and too few large-scale private housing developments, made people to build houses themselves, browsing the internet for floor plans, find my international website and contact me for custom house design.

While many people from Philippines choose to emigrate or work overseas, Philippines is also a destination for foreign expats looking for a cheaper place to live. Many Americans are living in Philippines, I personally don’t understand (maybe someone can explain me?) why people from such developed country would move to a third world country where living conditions, education and health system are much worse and crime ratio is high. YouTube is full of videos about moving or against moving to Philippines. If you want to have same living conditions you had in United States, a big house, a car, have kids in private school, etc, the cost of living is not much cheaper than in United States.

(personally I considered Philippines a better country than it actually is, until local people who contacted me for house projects, also informed me about bad living conditions) Philippines have beautiful architecture, there are a lot of beautiful, over-decorated houses, but this architecture style mask the fact that the they have one of the smallest houses in the world.

Filipinos are also one of the shortest people in the world, but I still see their homes ridiculously small. Bedroom around 6-7 sqm, making 3 bedroom houses to be about 50 sqm, size comparable with Hong Kong apartments despite of much larger country. Worse than this, most apartments are studios or 1 bedroom, compared with Hong Kong which is dominated by 2-3 bedrooms. In subdivisions built by major real estate developers, houses are usually 2-3 bedrooms.

If this was not worse enough, there are many people living in informal settlers (aka slums, squatters), of the rest who have legal land titles, many built houses that still looks like slums. In downtown Manila every unused piece of land get occupied by informal settlers, river beds are also heavily built, people living above highly polluted water and in danger of flooding. Even the 8-meter wide land between railways and nearby streets is the home for numerous poor families (cannot imagine how you can sleep as the trains horn continuously).

There are too many informal settlers for the government to take care about them. Government is trying to clear the slums from Philippines National Railway land and from danger areas such as river beds, and move them into socialized housing built at city outskirts, but people do not want to live there and move back to slums, which are conveniently located near workplace and amenities. 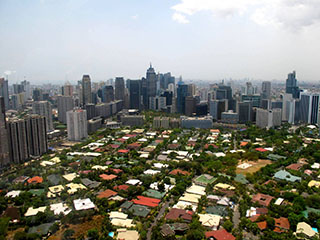 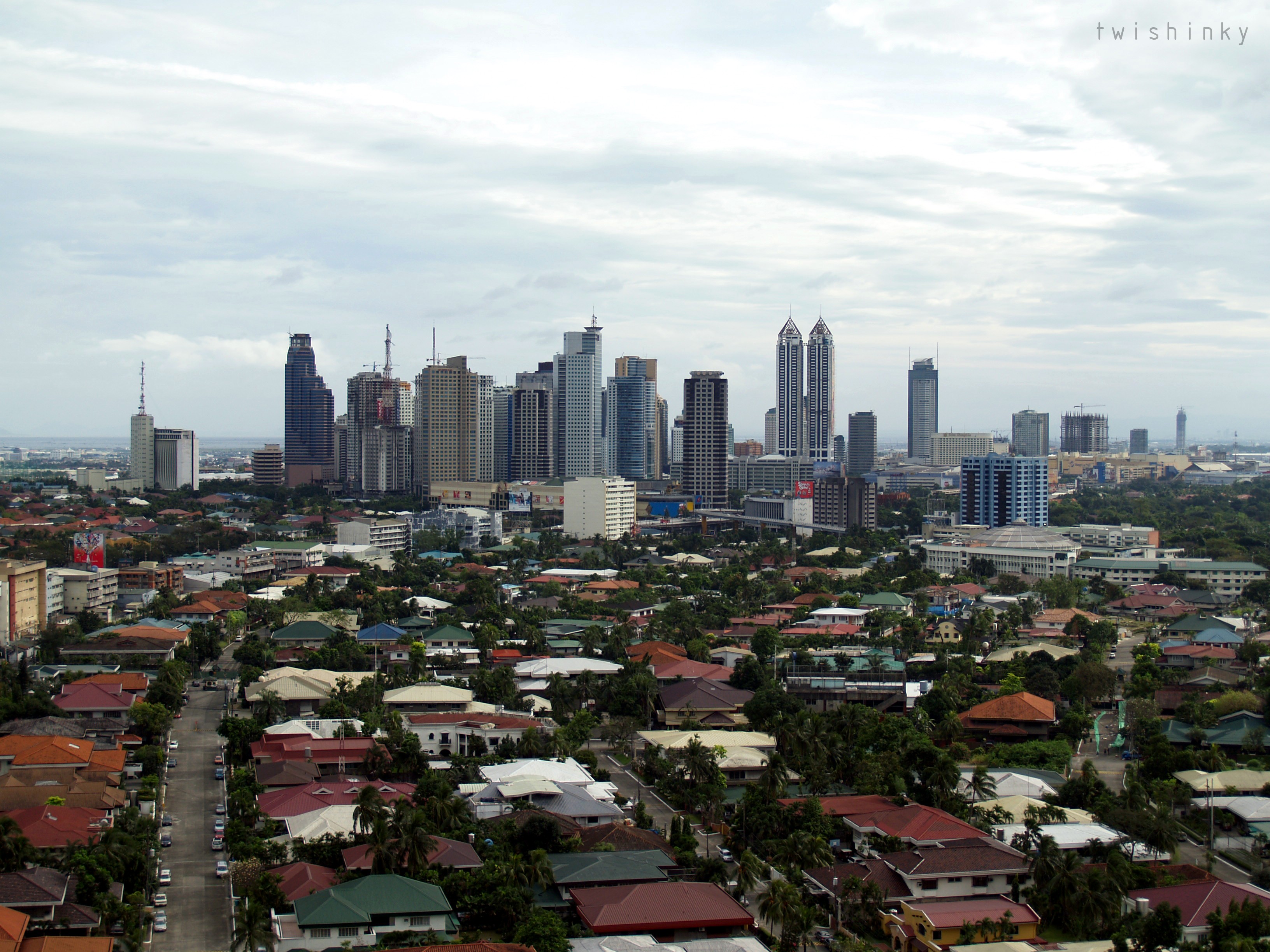 …and the typical Philippines houses from Metro Manila near Makati! 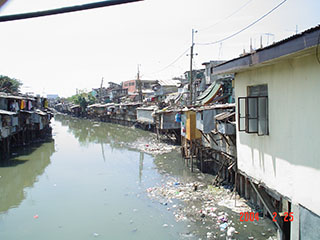 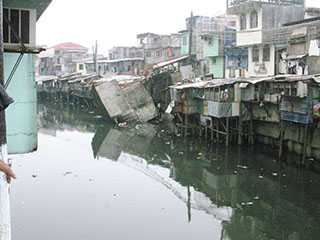 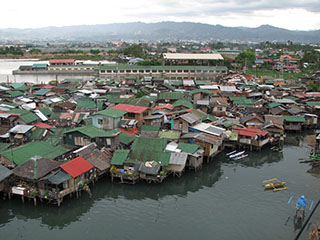 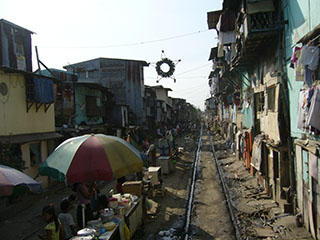 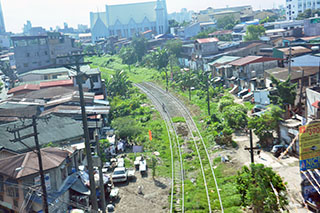 “Happyland“, weird name for the biggest slum in Manila 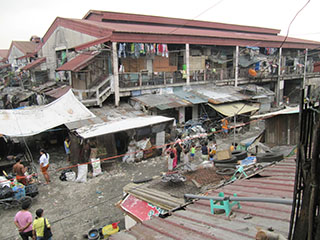 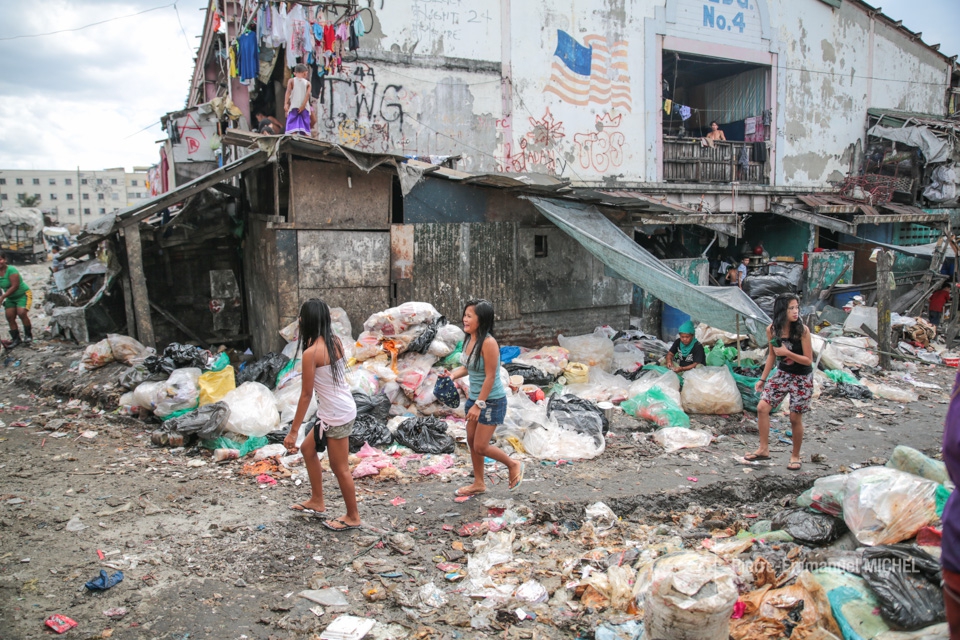 The fastest developing cities are Dasmariñas, Bacoor and Inus (30 km south from downtown Manila, within Cavite province), here are the most subdivisions and most beautiful architecture, less slums and more wealthy people. 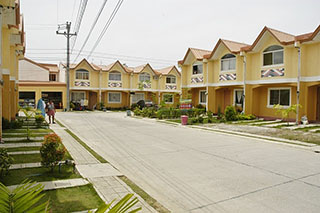 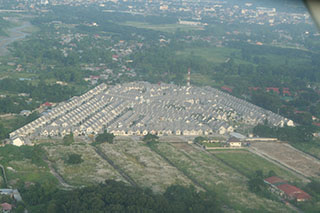 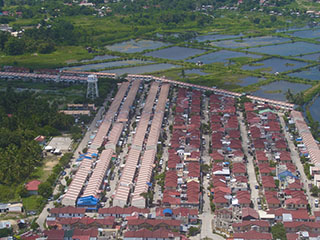 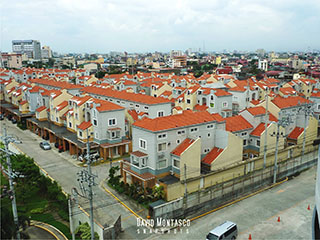 I estimate average house size in legally-built developments at 30-50 sqm, but a significant amount of population lives in slums which their house size cannot be defined, some slums having just a small enclosed area for sleeping, and people spend whole day outdoor. Is common to see families of 10 people sleeping in a 5 sqm space.

While population was rising, cities did not expanded much horizontally but rather became denser and denser, in Metro Manila lots are over-subdivided by successive family generations and nowadays there are entire families squishing on lots small as 20 sqm.

What I do not understand yet, is why in smaller cities and countryside, where the land is cheap, people own large plots but still build extremely small houses. Living in tight spaces is part of Philippines culture?

Subdivisions (aka Housing Complexes in other countries) became more common after year 2000. Rowhouses on plots small as 3.5 meters wide and 10 meters deep, with 24 meters between street axes, reaching densities of about 200 housing units per hectare, probably the densest housing development in the world (example: Ximena Mabalacat – floor plan).

Single detached = house surrounded by courtyard on all 4 sides, houses built at minimum 3 meters apart (1.5m setback for both houses).

Single attached = a definition that do not exists in any other country, with 1 or 2 firewalls (walls built at 0-lot boundary), built with same orientation so everyone is having windows facing to neighbor’s blank wall at 1.5m apart, giving the advantage of detached houses without shared walls. Sometimes the carport roof is attaching houses. They are VERY UGLY because on one side the roof is overhanging 700mm and on other side there is a blank wall that extend above roof.

Bungalow = single-storey house, similar with American meaning. Unlike the rest of Asia where bungalow means a detached house regardless of number of floors.

Nipa hut = Philippines traditional houses found in rural areas, made by bamboo and other wood, they are so light that if you want to move somewhere else you can ask few villagers to carry your house on their shoulders, as seen in the below video, a practice called bayanihan. I do not understand the reason of moving since this type of move is limited by people’s walking distance.

Most common housing typologies in these subdivisions:

40 sqm 3-bedroom back-to-back terraces on 5×8 m land (example: Cedar Residences – floor plan – I wonder how you can reach house door after parking, carport is 2.5 m wide and an average car 1.8 m wide will block the door).

The subdivisions offer also bigger houses with 3 and 4 bedrooms but very few of them are over 100 sqm.

In urban areas (non-subdivisions), according my study from satellite photos, most lots are within 4-10m wide and 10-16m long. Most plots vary from 40 sqm (minimum by law) to 120 sqm, very few lots are more than 120 sqm of land in urban areas. 80-120 sqm looks being average lot size. However, some people asked my help to design house plans for lots small as 20 sqm.

House setback are 1.5m in front and sides, and 2m at rear. I never found a clear regulation about carport roofs and balconies within setbacks.

Bad house design: as seen in floor plans provided by developers, living room is so small that you cannot place a sofa, TV and dining table in same time, or dining chairs once pushed out, block the way between kitchen and bedrooms.

Kitchen stuff (sink, stove, fridge, cabinets) are together only 2 meters long. Some low-cost houses do not even have kitchen inside, sink being placed outdoor (so you are bitten by mosquito while washing dishes?).

Carports are often designed 2.5 meter wide, minimum by law, the floor plans illustrate cars but insufficient space to open car door (so how you can get out of car?), or the car is blocking the way to house main door. No wonder why we see many people parking on roadside. The idiot architects don’t know that 2.5 meter wide is OK only for open carparks, garages or any parking space between walls should be 3 meters minimum width, today cars average 1.8 m width and you need 90 cm space on driver side and 30 cm on other side.

I need feedback from local people. I understand that a large part of population is poor so low-cost housing is needed, but are these houses big enough for people needs? Or people will extend it over courtyard and destroy the urban landscape, like in Mexico?

Anyone who know or find resources about building code regulations across history please contact me!

Note that all these horrible tiny houses are examples of LEGAL buildings, designed by architects and build with permit from government. Imagine that the slums are even worse!

Can’t find an empty plot of land? No problem, build OVER ROAD! 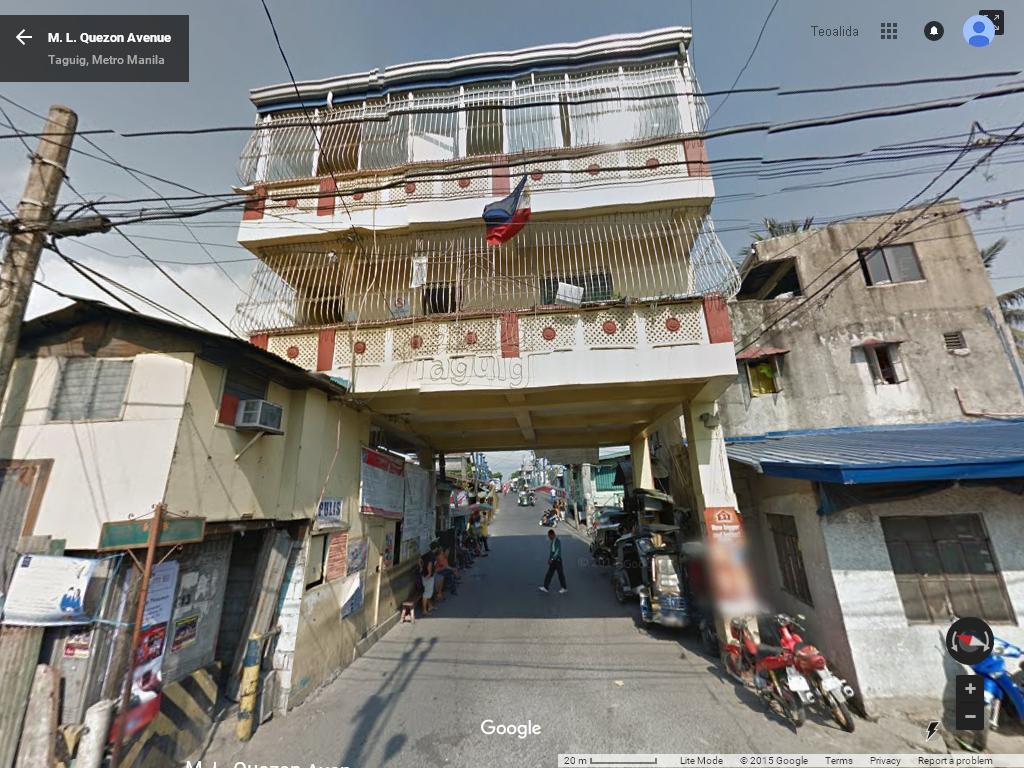 Manila Light Rail / Metro Rail was the first metro system in South Asia, opened 1984 but development was slow and presently it have only 3 lines totaling 51 km.

There are also modern buses, but most common means of transportation is the Jeepney, originally US Military vehicles which (few hundreds vehicles) were sold to locals when troops retired at end of World War II, locals converted them in buses by extending their wheelbases and installing roofs, and over-decorated, calling them Jeepney. Nowadays most Jeepneys are made 100% locally, resembling the shape of American Jeep but made 6-7 meters long, others are based on second-hand Japanese SUV, vans and trucks, still called Jeepneys despite being unrelated with American Jeep). About 50.000 Jeepneys are driving around Manila (according BBC).

These vehicles are over-decorated with various texts, religious messages and other bullshit, but not with their route (so how people know to pick the right one!?). They follow chaotic routes and stop anywhere even in middle of road, putting passengers in danger. In rural areas is common to see Jeepneys overcrowded with people sitting on their roofs, despite that it is an illegal practice (example video). 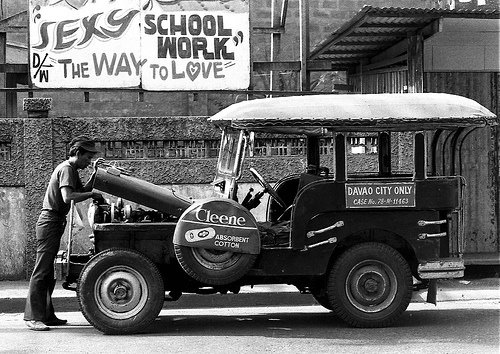 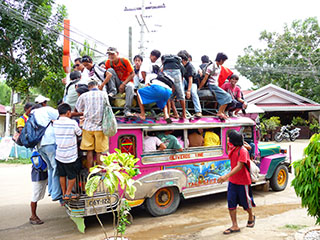 Another form of transportation unique in Philippines are Owner Type Jeep, hand-made vehicles resembling the US Jeep but in miniature, less than 3 meters long, most lacking seatbelts, windshield wipers, or other features standard for western cars since 1960s. Does anyone know what engine they have?

Philippines also have tricycles, common also in other South Asian countries, made from bicycles and motorcycles with a bench attached supported by a 3rd wheel, and roof. Some are even used as taxis. When you see a car, it looks giant compared to traditional vehicles! 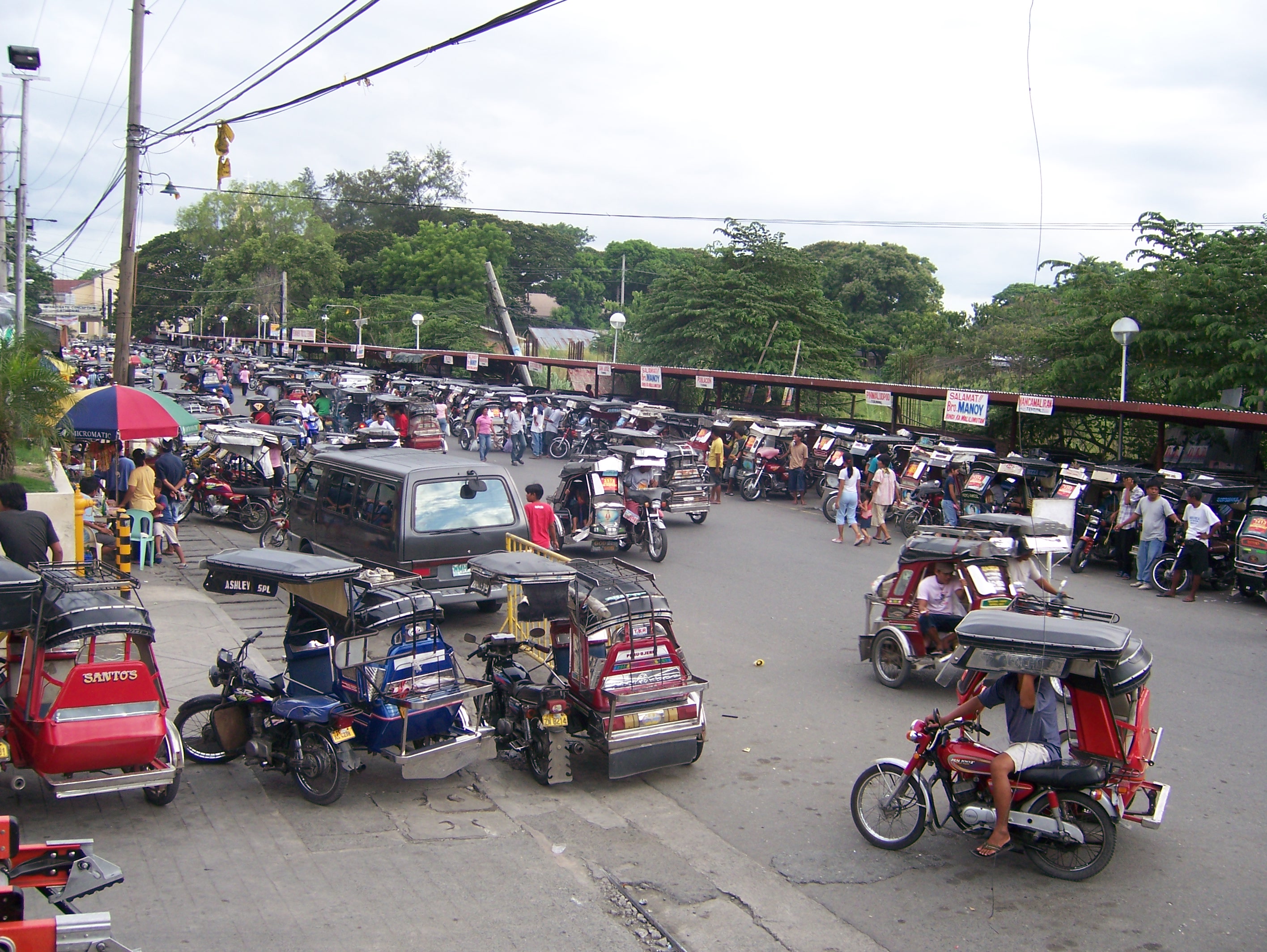 Page published for first time in 2012 and updated over next years with more information found by me or provided by visitors. Text written by me (Teoalida) and images taken from Wikipedia, Panoramio and other websites. Do you have useful information that worth adding? Did you found an error or have a contradictory opinion? Leave a comment!

86 thoughts on “Housing in Philippines”