After several critics regarding Palace II’s lack of elegance, and Palace I’s messy house floor plan, too few rooms, non-rectangular rooms and bad interior design, I decided in April 2013 to build a new The Sims model of Trianon Palace from Floresti, Romania, built by Cantacuzino Family in 1910. I broke my personal record of the most expensive house in The Sims 2. I have playtested it and modified it twice in May and for third time in July, before publishing on my website, to be sure that will be awesome. 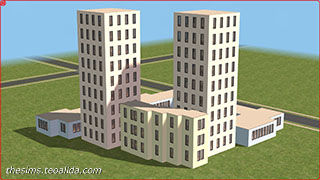 The Sims is a game meant to build houses, but I can also build a skyscraper… or two, the twin towers of World Trade Center, completed by Marriott Hotel and the 3 additional low-rise buildings. 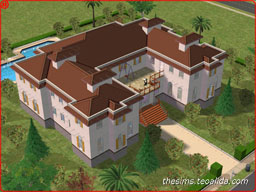 A realistic replica of a REAL building, the Trianon Palace from Floresti, Romania, built in 1910 and abandoned, made originally in 2006 with base game only and remade in 2009 using Nightlife.