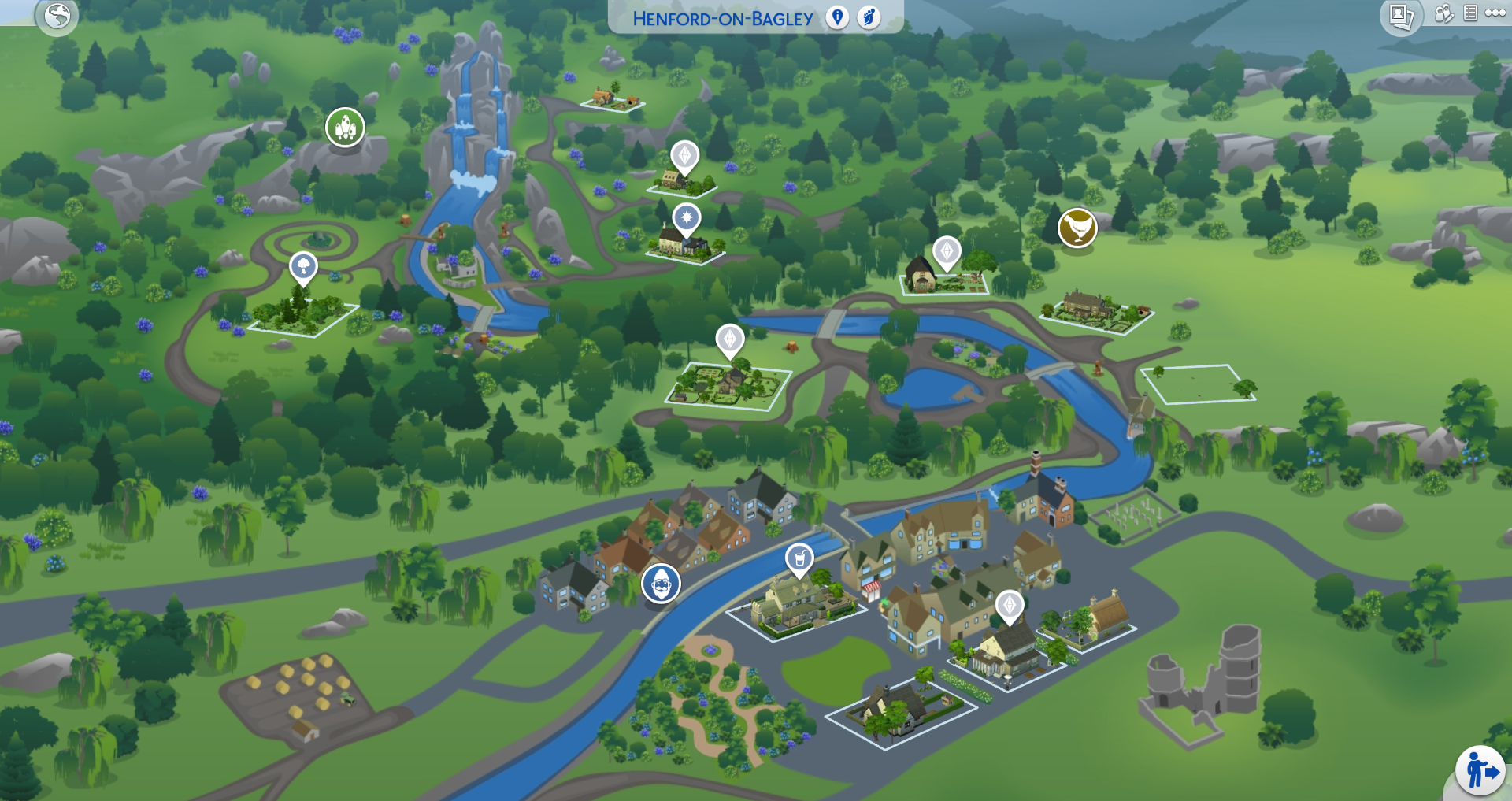 Henford-on-Bagley is famous for rolling hillsides, fresh farm produce and stonecarving which locals have been doing for hundreds of years. Princess Cordelia visited Henford-on-Bagley as one of first places after the Great Sloth Invasion.

The world was announced via a postcard, and also by SimGuruFrost through an announcement post on the forums at TheSims.com.

There are three neighborhoods in this world:

Finchwick
Finchwick is a small town that prides itself as a historically bustling and tight-knit community. It is home to various shops and grocers owned by the locals, and it also hosts the weekly Finchwick Fair.

Old New Henford
This part of Henford is known for its lush estates, rolling hills, and small community garden. It used to be one giant property owned by The Watson Family, who sold plots of it over the years. They still own a sizable estate on one of the hills. Old New Henford is also home to many wild animals that roam the countryside.

The Bramblewood
The wooded area on the outskirts of Henford has a storybook-like feel and is where the most wild animals can be found, such as wild birds, bunnies, and foxes. It is considered the most romantic part of Henford, with many places to explore. It is rich in history, and plenty of ruins to discover, that were once home to Lord Volpe. It also includes a swimmable lake.[5]

There are 12 lots in Henford-on-Bagley, each separated into three neighborhoods. There is also a 64×64 lot.

A New Start household
4 Olde Mill Lane
§20,000
Cecilia Kang
After living in the big city and having her heart broken, Cecilia decided to ditch everything she knew for a small garden plot and some chickens. She’s still looking for someone to share this life with, though after a date she’d love to forget with the local Creature Keeper Michael Bell, she’s happy to only form long-term attachments with the critters that visit for now.

Moody & McMillan family
14 Nettle Lane
§22,000
Derek McMillan, Ian Moody
After working an office job for more years than he’d care to admit, Derek found a man willing to live the rustic dream of his youth and the two moved to his family cottage and never left. When not fending off financial offers from developers who see their home as a prime target, Ian and Derek balance their days between adventure and quiet, depending on who’s in charge of the agenda. Despite- or perhaps because of their differences, time has been most kind to these elderly lovebirds, who live a contented retirement as key members of the Henford-on-Bagley community.

Scott family
3 Cobblebottom Street
§22,000
Simon Scott, Sara Scott
As owners of The Gnome’s Arms, Finchwick’s beloved pub, the Scotts are living the dream! Well, Sara’s dream at least. Simon- a city boy with no more city around – still feels a bit awkward every time he runs into a chicken. Still, he’s here to support his wife’s dream. Will their hopes of adding a new member to their tiny family change things up for better or worse?

Watson family
Olde Mill Hill
§28,000
Thomas Watson, Rahmi Watson, Rashidah Watson, Imran Watson, Maira Watson
Inheriting the family estate was always the plan, but Thomas may be in over his head. For a man who equates success with crop size, he’s losing both his confidence and his family. While his wife Rahmi loves the country air, her feelings for her husband are stale, and the affections have wandered. The oldest of the three children, Rashidah, feels trapped, preferring to dream of a future outside Henford-on-Bagley – dreams that have sparked something between her and a kindred soul. The two youngest couldn’t be more different! Imran treasures the security of life at home while Maira can be found bravely venturing out into the unknown. Will this hectic family come together, or fall apart in their “old new” home.

Chopra family
§22,000
Lavina Chopra, Rahul Chopra
Raising Rahul as a single mom hasn’t been easy, but Lavina has grown to love the relationship, as well as the pleasure she gets out of keeping the village running smoothly and being a good neighbor. Rahul looks up to his capable mother, but after living in this small village all his life, yearns to travel and see the world. He can’t quite bring himself to leave his mom all on her own, though.

Total 14 pre-made neighborhoods with 350 lots Additional 5 hidden neighborhoods do exist in game files and are used to generate NPC, they cannot be played.

Contact me via live chat or email [email protected] if you need help regarding my content (houses I built in The Sims), have suggestions for new houses that I can build, report broken links or errors that need correction, etc.