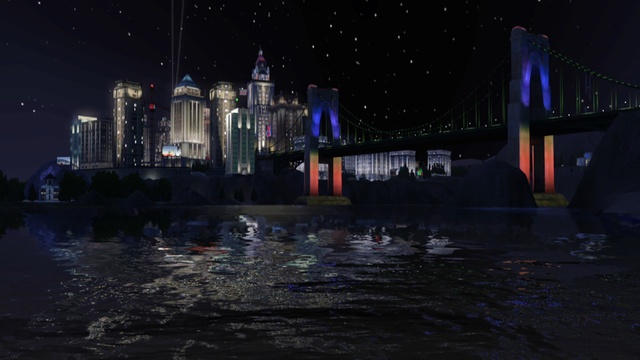 Bridgeport is a world that ships with The Sims 3: Late Night. It is the first urban city of its kind to be featured in The Sims series games as most past neighborhoods and worlds were either towns or suburbs.

Bridgeport was founded by Ebenezer Alto, as stated in the town’s description. In the past, Bridgeport was once a shipping town that was full of sailors and smugglers, where the only beach in Bridgeport is named the Smuggler’s Cove, situated on a small coastline facing the bridge and the bay. Some time later, Bridgeport has turned into a nightlife city when the film industry came to the city, changing the small town into a bustling downtown with high-rise buildings.

Bridgeport is designed to focus on late night activities, and is similar in many respects to the Downtown sub-neighborhoods in The Sims: Hot Date and The Sims 2: Nightlife. Bridgeport consists of two sections connected with a large bridge. The urban city center is where all the bars, clubs, lounges, and penthouses are located. The other section is an exclusive neighborhood for the wealthy, where most high-star celebrities live in their mansions. There are other celebrities who live in the urban area as well, and the city center has a film studio for Sims who are employed as actors and actresses. The urban city center faces the ocean, while the wealthy neighborhood is located further to the east.

Bridgeport is a special late night town, which differs from the other worlds in The Sims 3. In Bridgeport, fake taxi cabs will appear across the town to simulate a bustling downtown feeling. Some wildlife animals, i.e. wild horses, deer, and raccoons, will also not appear in Bridgeport. Bridgeport also has different work hours than the other worlds, which mostly occur around the afternoon and evening. Bridgeport is a suitable place for single young adults and older to have fun and party. Most residents are also on average richer than other families in different worlds.

Took me about 1 hour to compile the below table.
Please do not copy it on other websites without crediting www.teoalida.com/thesims

One thought on “Bridgeport”